A vote in general indifference. 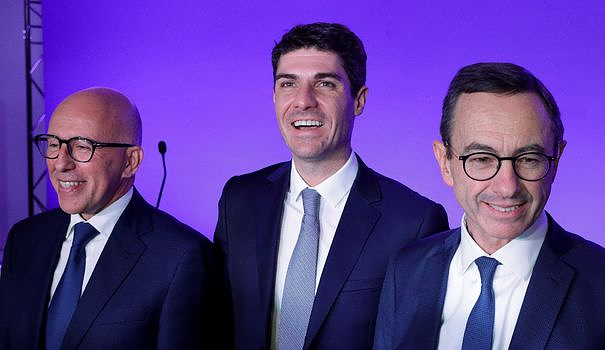 A vote in general indifference. The 91,000 members of the Republicans (LR) are called upon this weekend to elect their new president. Three candidates are in the running to succeed Annie Genevard: Éric Ciotti, Aurélien Pradié and Bruno Retailleau. If no applicant wins more than 50% of the vote this Sunday, December 4, a second round is scheduled for December 10 and 11.

A year after the primary, this vote downgrades the heir to the UMP, who fell below 5% during the presidential election. No presidential candidate on the horizon. Laurent Wauquiez and Xavier Bertrand stepped over this ballot, believing that the reconstruction of the right could not take place from this aging apparatus. This election is however decisive for a right in lack of identification.

In the Assembly, the 62 LR deputies are struggling to put their position as "responsible opponents" to music. The group remains invisible, wedged between the majority and noisy opposition. The right needs a face. This ballot will offer him one. Charge this personality to raise the party or turn off the light. A few hours before the vote, review of the three contenders for the presidency of LR.

The deputy of the Alpes-Maritimes is the favorite of the ballot. Finalist of the last Congress, Éric Ciotti had badly experienced the wave of rallies in favor of Valérie Pécresse. The "Everything except Ciotti" marked the parliamentarian, who wishes to wash away the affront. "He wants to be respected at the height of the status he considers to have", confided this summer an LR strategist. The man left with a head start on his rivals. A candidate since July, he heads the powerful Alpes-Maritimes federation (10% of the electorate). He is also very established in the party, of which he directs the strategic national commission of investiture (CNI).

His strengths: Eric Ciotti's strength is a promise. If elected, he undertakes to designate Laurent Wauquiez as the right-wing candidate for the next presidential election. The primary will only be a bad memory. The message is clear: to vote Ciotti is to vote Wauquiez. With this message, Éric Ciotti captures part of the popularity of the boss of the Auvergne-Rhône-Alpes region.

Éric Ciotti is finally in tune with the ideological DNA of LR members. His right-wing position - firmness on sovereign issues and economic liberalism - suits them. The man is rolling out the same program as during the 2021 Congress. He advocates better control of immigration and pleads for a massive reduction in taxes.

On the other hand, he takes care to smooth his speech. Forgotten, the glances at Eric Zemmour or the denunciation of the "great replacement". Éric Ciotti takes care of his unifying profile for the second round and does not wish to offer any pretext to his critics tempted to leave LR. Privately, he does not expect a wave of executive departures. "He takes responsibility, like the RN group in the National Assembly", smiles a lieutenant.

His weaknesses: Eric Ciotti's strategy is a double-edged sword. Taking care of your image also means losing your uniqueness. The chosen one is less offensive, at the risk of disorienting certain LR activists. "He wants to cleave as little as possible and is no longer himself, assures an LR executive. He tries to have a different image to gather in the second round. He is a bit skimpy in this costume, because it is not him."

Evidenced by the controversy around the xenophobic remarks made in the National Assembly by the deputy RN Grégoire de Fournas. Éric Ciotti hastened to condemn them when Bruno Retailleau criticized the sanction pronounced against the chosen one. "Eric should have defended him, analyzes support. His reaction let Retailleau say that he was lying down in front of political correctness." Finally, the Wauquiez card brandished by Éric Ciotti is not without risk. It can generate a coalition of opponents to a presidential candidacy of the president of Auvergne-Rhône-Alpes.

The boss of the LR senators did not want to get started. He was pushed this summer by elected officials frightened by the prospect of a victory for Eric Ciotti. He posed as the candidate of the rally, the only one capable of combining right-wing speech and message of unity. But Bruno Retailleau made a strategic shift during the campaign. He plays the "break" card, carrying out a salty inventory of the recent history of the right. Less known than Eric Ciotti, the man must take risks to win.

His strengths: Bruno Retailleau is not a leftist. His security and liberal convictions marry those of Éric Ciotti. Between the two men, the differences are minimal. None of them pleads for a rapprochement with Emmanuel Macron. By voting Retailleau, the LR member knows where he is stepping. His intellectual rigor is finally recognized internally. "He's a brilliant guy," greets Éric Ciotti in private.

The senator took risks in this campaign. His severe inventory of the mandates of Jacques Chirac and Nicolas Sarkozy may please the militant base, disappointed by the proximity between the founder of LR and Emmanuel Macron. The candidate believes he has scored points during the Fournas controversy and hopes that his ode to militant democracy will appeal to LR members. By refusing to dub Laurent Wauquiez from 2023, he finally promises to give priority to the intellectual reconstruction of the right. Not useless, as LR struggles to renew its software.

Its weaknesses: Started under the sign of the rally, the campaign of Bruno Retailleau ends under that of the rupture. The senator's rivals point to a race without a compass, which could disorient the LR electorate. "He's spinning," mocks a support from Eric Ciotti. In the Pradié and Ciotti camps, it is believed that the senator made a mistake by strongly attacking Nicolas Sarkozy. He would have underestimated the nostalgia of the members towards the victorious epic of 2007. His strategy of "breaking up" does not make him the best candidate for the second round, while rumors of a Ciotti-Pradié rapprochement are buzzing.

Bruno Retailleau is finally not from the house. The former close friend of Philippe de Villiers only joined the UMP in 2011. His opponents like to recall this course, as if to make it a "foreign body". He assumes it and wants to make his political history a guarantee of independence and freedom. His conservatism may finally put off some members. "His right is a mixture of UDF for the apparent moderation and Tea Party", mocks a support of Eric Ciotti. Bruno Retailleau finally delivered a disappointing performance during the only televised debate, regretted even in his team.

The 36-year-old Lot MP is the challenger of the race. The secretary general of the Republicans is playing the card of generational renewal and ideological overhaul. This herald of a popular right calls on his camp not to lock themselves in on sovereign subjects and to embrace social and societal subjects. His bill (PPL) aimed at creating a specialized court for domestic violence was thus adopted Thursday evening in the National Assembly.

His assets: his age, already. Aurélien Pradié seized the need for renewal on the right. In the era of Bardella and Panot, would the right remain on the sidelines of this generational movement? The elected Lotois played this card with finesse, without adding to it. The image is sufficient unto itself. The MP finally made his little social music heard, like on pensions. His refusal to postpone the legal age of departure is a highlight of his campaign. "He ran a good campaign, admits a parliamentary source. But how many people got to know him?"

His weaknesses: Aurélien Pradié suffers from a lack of notoriety, which this campaign will not have completely filled. Its social positioning offers it a media light, but it could put off some of the LR members. The elected official blurred his position during the televised debate, evoking the ban on wearing the veil in the street or wearing a uniform until university. "He damaged his image, mocks an LR executive. He gave the impression of making a big difference for electoral reasons." The man, with a sharp personality, finally has no shortage of internal enemies.