"He wants to show that he has lost none of his fighting spirit": Macron, the return of the hyperpresident

On the Elysée social media video stream, Pap Ndiaye is leaning on a black table on the far right of the expanded frame. 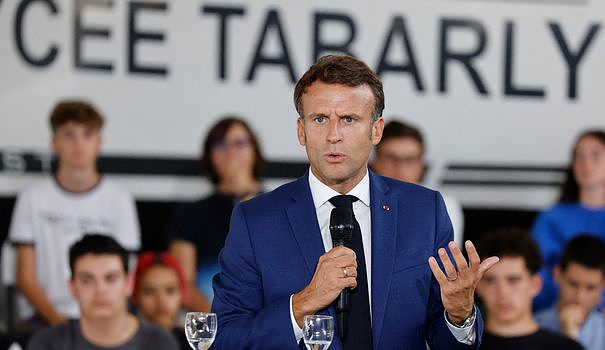 On the Elysée social media video stream, Pap Ndiaye is leaning on a black table on the far right of the expanded frame. He is focused, attentive, mute, almost invisible. A few centimeters from him, Carole Grandjean imitates him. In the center of the hangar and the image, far from his Minister of National Education and his Minister Delegate in charge of Vocational Education and Training, Emmanuel Macron thrones in front of two rows of students and two brand new boats. This Tuesday, September 13, the President of the Republic was traveling to the Éric Tabarly nautical, automotive and industrial high school in Sables-d'Olonne to do the after-sales service himself. its future reform of the vocational high school: the site, of magnitude, complex, is an integral part of the overhaul of the education system that the candidate Macron saw as a pillar of his second five-year term. In Vendée, the starting point for the Golden Globe, the Head of State is keen to show, once again, that he is indeed at the helm of the country. That the captain of the ship France is back.

We said it without a compass. Without telescope. Without a conquering soul. In his troops, people were sometimes worried at the sight of this president who did not quite resemble that of the last five years; even less to the one who was elected in 2017. The sluggish start to this second term has not escaped anyone in Macronie, battered by the - very - relative majority situation in the National Assembly. A harsh autumn-winter season was promised for the executive with a millefeuille of subjects of concern, so Emmanuel Macron takes the lead. For nearly a week, the tenant of the Élysée has multiplied his appearances: on September 5 during a press conference on the energy situation in Europe, improvised after the cancellation of a trip to the provinces, on September 8 for the launch of the National Refoundation Council, on the 9th for an exchange with the farmers of Loiret...

And above all, this Monday 12, he spoke for nearly two hours with the journalists of the presidential press association, under the guise of "off", in order to sweep away from the minds of the media this nagging feeling that he is sailing on sight. . International, energy, private jets, pensions, end of life, state budget... The President of the Republic took care to mention most of the hot topics of the new school year. "He wanted to show that, on domestic issues in particular, he was not in retreat, that he had lost nothing in combativeness. He undoubtedly wanted to demonstrate to journalists of all persuasions that everything he was able to read about his supposed loss of speed, his disinterest, his disappearance from public affairs, was perfectly unfounded”, slips a member of his government.

What better way to affirm his recovery than to accelerate the tumultuous pension reform, which he intends to bring into force in the summer of 2023. And to surprise his world by indicating that he does not It was not ruled out to include it in the social security financing bill (PLFSS) which will be examined in the Assembly in October. Even though the negotiations with the social partners have barely begun... We are far from the new culture of compromise praised by the Castle and the majority, especially if article 49.3 were to be drawn to vote on the Budget.

His going has even surprised more than one within his government team, some members of whom fear that the subject, put on the table immediately, will electrify the social autumn even more. "I was surprised by the exit, just like Olivier Dussopt (the Minister of Labour, editor's note) for whom the options were still open, explains a minister. But it had already been a few days since the president had shown some form of enthusiasm. On the question."

During this casual discussion with journalists, the Head of State also announced that he wanted to launch a "citizen's convention" on the end of life in October, awaiting - or even anticipating - the opinion of the National Advisory Committee delivered on Tuesday. . The resulting position will be subject to the "filter" of Parliament, or of the people by referendum. Even if he refutes it, it is difficult not to see in this project a desire to leave an indelible political mark via this societal reform, as his predecessors were able to do with the abolition of the death penalty or marriage for all. Especially when you know how cautious the head of state has been on the issue in recent years. Fine-tuning, acceleration, legacy: in the space of two hours, Emmanuel Macron told the relay he distrusts the most, namely journalists, that his route was drawn and his horizon drawn until 2027. And if this second five-year term had really started on Monday?