From Chirac to Macron: when presidents want to get involved in football

Emmanuel Macron spends his month of November far from France, in the field of diplomacy. 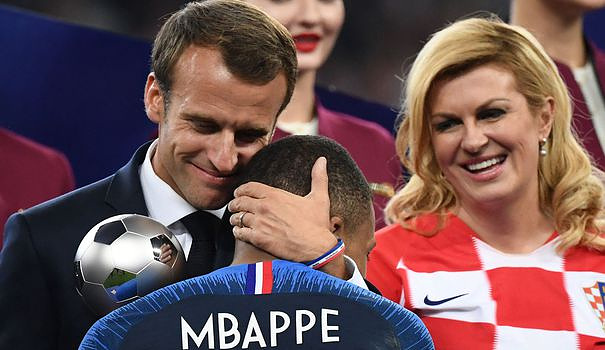 Emmanuel Macron spends his month of November far from France, in the field of diplomacy. And in December, on what ground? The Elysee said on Tuesday that the president would travel to Qatar if the Blues reach the semi-finals of the World Cup. Beyond the controversies, and they have not finished swelling around the organization of this competition, the position of the president is clear: our country is one of those which in this oh so troubled period can, and must , talk to everyone. No boycott here.

Emmanuel Macron is one of those presidents who really love football. Between the Blues and our Heads of State, sorry, between our Blues and the Heads of State, it's a funny story, told with delight by Mohamed Bouhafsi in a documentary (Les Bleus et l'Elysée, Sunday November 20 at 8:55 p.m. on France 5) rich in testimonies, including interested parties: Nicolas Sarkozy is the only one of the three presidents of the Fifth Republic still alive who did not want to participate.

Sometimes the ball goes round and it's all happiness for the tenant of the palace. In 2018, Emmanuel Macron has the joy and the chance to be carried by the triumph of Deschamps, Mbappé and others. Until exulting after the first goal of France in the final against Croatia, under the eyes of a certain Vladimir Poutine. Which gives rise to a famous photo. "It's more the supporter than the president, I admit," concedes Emmanuel Macron. "There is a side, that he does not take it badly, childish, points out François Hollande never late with a tackle, including from behind, on his successor. If it was me who had done that, that wouldn't we have said?" The indirect exchange between the two men continues in the documentary to the point of becoming downright funny when François Hollande evokes the lost final of Euro 2016 which will make it possible to avoid repeating the same errors two years later: "A president works always for his successor!" This time, in front of the cameras, Emmanuel Macron laughs frankly: "It's true, it's fair."

Politics and football, I love you neither. 1998 remains a textbook case, to be studied both at Sciences Po and in theater classes. Jacques Chirac masters both the rules of football and the art of dissolution, that is to say. He doesn't even know the names of the players on the team that will become world champions and on arrival, notes Michel Platini mischievously, "I have the impression that he is the one who won the World Cup" . Chirac had the right phrase at the right time - "I'm training to put on the World Cup" he says in front of the microphones after a visit to Clairefontaine, the training camp, before the start of the competition - and then unfolds the audacity of those who are not afraid of anything. Here he is arriving at the stadium for the France-Brazil final with a Blues jersey in his hands. Manuel Valls, who then advised Prime Minister Lionel Jospin, could not believe his eyes. It's not over: Claude Chirac suggests that he put it on under his jacket, "do like Michel" (Platini). If the president is content to put it on his shoulders, the actor Chirac will take full advantage of this historic first for French sport, he who was then closer to the Tarpeian rock than to re-election at the Elysée.

But football can be quite a trap. In 2001, France hosted Algeria for a match that was thought to be friendly and which was disastrous: the lawn was invaded under the eyes of the ministers of the plural left. In 2010, it is a national psychodrama. The players go on strike in the middle of the World Cup in South Africa and prefer the bus to the training ground, which is less convenient for playing. Nicolas Sarkozy summons Roselyne Bachelot, then Minister of Sports, to put on the coach's outfit, which does not spontaneously suit him: "You are going to yell at them and order them to win the next match." François Fillon believes in rugby and kicks in touch: "Finally, all that is still only people kicking a ball."

What then is the role of politics, what is its rightful place? You have 90 minutes to respond, not including overtime. In 2016, the Benzema affair became a problem within the executive itself: President François Hollande criticized his Prime Minister Manuel Valls for having taken himself for the coach by speaking out against the return to the national team of that who finds himself embroiled in a dark history of sextape blackmail.

The Blues will play their first match in Qatar on Tuesday, November 22, against Australia. Never has a team managed to retain its title at the next World Cup, it has even often been eliminated without glory. Emmanuel Macron knows what awaits him, just in case: "When the France team loses, these are subjects that quickly become political."