Floyd officer killed in training is questioned by the prosecution

An ex-police officer from Minneapolis was charged in George Floyd’s death. He testified Thursday that he did not act on a suggestion by another officer to roll Floyd on his back after he stopped breathing. Officer Derek Chauvin didn’t check for a neck pulse, and that he did not try to remove Floyd's neck. 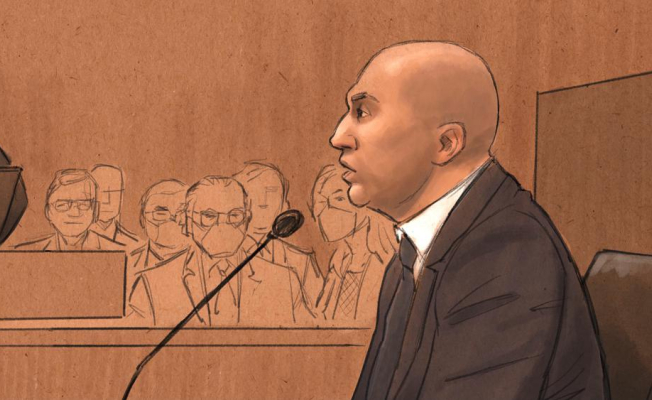 J. Alexander Kueng is one among three former officers who were charged in federal court for violating Floyd’s constitutional rights. Chauvin put his knee into Floyd's neck and the 46-year old Black man was placed face down on the street, handcuffed, and then pleaded for air. Kueng placed his back on Floyd's, Thomas Lane supported his legs, and Tou Thao remained behind.

Manda Sertich, the prosecutor, asked Kueng questions about his training. He also mentioned material from an emergency medical responseer course that suggested someone may not be breathing properly even though they are talking. Then he lists things to look for.

She noticed that Floyd had stopped talking after approximately 4 1/2 minutes, and she asked if it was "red flag."

Kueng replied, "It's something to reassess ma'am," and later admitted that he had been trained to roll someone on his side to help them in their breathing when safe.

Kueng claimed that he did not do this at Lane's suggestion or during the five-minutes that officers kept Floyd restrained. Kueng claimed that he checked Floyd’s wrist pulse twice, and could not find one. He then told Chauvin but didn't attempt to check Floyd's neck pulse.

Floyd is being accused by all three officers of denying him his right to medical treatment. Prosecutors claim that Floyd was denied medical care because the officers did not roll Floyd onto their side or give him CPR.

Kueng and Thao were also accused of failing intervene to stop Chauvin from the May 25, 2020, shooting that triggered protests around the world and a reexamination on racism and police brutality.

Defense lawyers claim that the Minneapolis Police Department did not provide adequate training and required rookies to follow orders. They also claim that Chauvin was convicted of state murder and manslaughter last summer.

Retired assistant chief police officer in Springfield, Missouri testified that Minneapolis Police Department's training for an officer's duty was not effective because it used too many lectures rather than hands-on training and testing. This made sure that trainees learned the correct lessons.

Steve Ijames (a force-of-force expert) also stated that Kueng didn't use unreasonable force in order to subdue Floyd. He said, however, that Chauvin's continued use of force to stop Floyd fighting was unjustifiable -- "beyond doubt."

He said that Kueng did not have the experience and training to recognize Chauvin's use of force, and that Kueng should defer to Chauvin who is a 19-year veteran and had been his field training officers.

Wednesday's testimony by Kueng showed that he told Chauvin that he had deferred to him because he was his senior officers and that was what he was trained for. Lane and Kueng were both rookies who only had a few days experience working without a mentor.

Kueng said that he trusted Kueng's advice and was my senior officer. He also said that he feared being fired for not obeying a superior.

Sertich asked Ijames questions about whether Kueng could have checked the neck and walked around it, but he didn't think that would be possible.

Retired Minneapolis Police Department Lieutenant and Field Training Officer testified that Chauvin was the right man to take control of the situation, given that Lane and Kueng were both rookies. Gary Nelson stated that "somebody has to be in control" and that there isn’t always enough time to think.

Samantha Trepel, the prosecutor, cross-examined Nelson and found that officers weren't required to follow clearly illegal orders and that they are accountable for their actions as well as their inactions.

This week, Thao stated that he used the three other officers on scene to take care of Floyd's medical needs while he controlled traffic and the crowd . He also said that he didn’t believe Chauvin’s knee was on Floyd’s trachea.

Lane is expected to also testify in the trial, which is set to resume Monday.

Lane, who's white, Kueng, who's black, and Thao (who is Hmong American) will face separate state trials in June. They are accused of aiding and abiding murder and manslaughter.