Felipe VI: "You lawyers have become the main actors in civil society"

The monarch praises the work of the lawyers, which he describes as "extremely valuable", in the robed act that has served as the starting signal for the celebration of the 425th anniversary of ICAM. 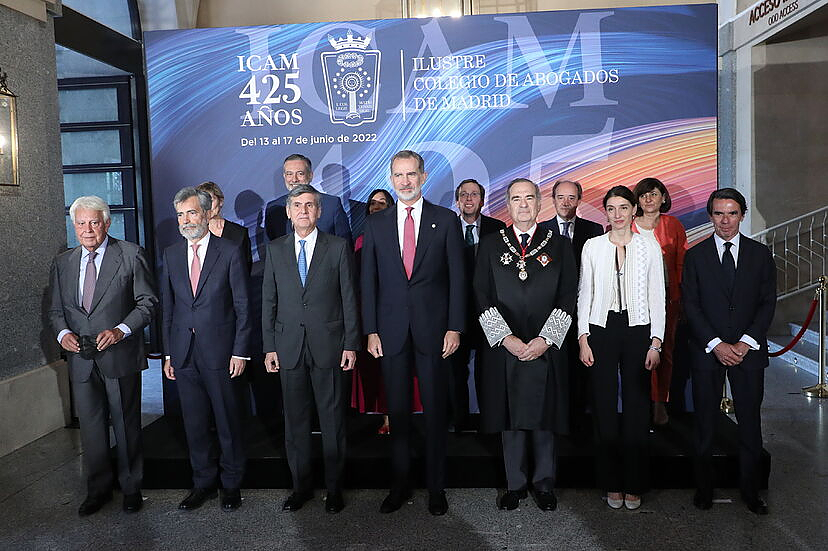 The monarch praises the work of the lawyers, which he describes as "extremely valuable", in the robed act that has served as the starting signal for the celebration of the 425th anniversary of ICAM.

"Extremely valuable." This is how Felipe VI described the work carried out daily by legal professionals in our country, since, in his words, "you lawyers have become the main actors in civil society, writing on many of the best pages that have been shaping the history of Spain; the most notable in terms of advances in the rule of law".

These statements were made by the monarch in the robe ceremony that served as the starting signal for the commemoration of the 425th anniversary of the Illustrious Bar Association of Madrid (ICAM), which has more than 75,000 professionals.

Today, more than 1,500 people have gathered at the Royal Theater in Madrid to witness the oath or promise of those who join the professional practice. About 350 young people who, by virtue of the provisions of article 10 of the General Statute of Lawyers, have committed themselves before the King, an honorary collegiate of the Madrid corporation for 25 years, to abide by the Constitution and the rest of the legal system legal, as well as to comply with the ethical standards of the profession, with freedom and independence, in good faith, with loyalty to the client, respect for the opposing party and keeping professional secrecy.

According to Felipe VI, in the hands of lawyers "is deposited the defense of fundamental rights and of all those that are concentrated in article 24 of the Constitution. Enforcing them, enforcing them and also respecting them constitutes, above all, an act of service to society itself, which transcends the specific case". He adds that advocating "implies commitment and dedication, the fact of having such an advanced justice system lies in the fact that no one is deprived of defense in the face of a legal conflict. This is the greatness of the rule of law and its robed protagonists" and highlights the effort of the professionals of the Trade Shift "who make the system work with high levels of quality in the provision of services".

Along with the King, two of the most illustrious members of the ICAM, the former presidents of the Government Felipe González and José María Aznar, as well as the presidents of the Supreme Court and the Constitutional Court, Carlos Lesmes and Pedro González-Trevijano, respectively, participated in the act. ; the Minister of Justice, Pilar Llop; and the mayor of Madrid and also a collegiate member, José Luis Martínez-Almeida.

Dean José María Alonso thanked all of them and the rest of the authorities and invited guests for their presence, recalling in his words of welcome the historic commitment of the Madrid legal profession to the Crown and the constitutional order. "Your Majesty, you can be sure that the Madrid legal profession, which I am honored to represent today, will always be by your side in defense of the principle of legality", he stressed.