The Oregon Supreme Court ruled that Nicholas Kristof, a former columnist for New York Times, doesn't have the required three-year residency to run for governor. 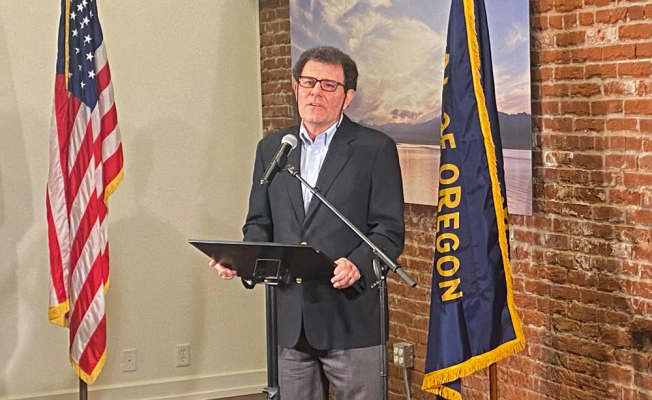 This leaves the former candidate with a large war chest and no future plans.

The justices upheld an Oregon election official's January decision that Kristof was not qualified. They cited Kristof's 2020 vote in New York as evidence.

"The decision of where to register (to cast a vote) is meaningful because it provides evidence that a person feels most attached to a political community," the court stated .

Kristof moved to Yamhill, Oregon with his parents at the age of 12 and has since maintained and expanded the farm as an adult. He announced his candidacy for president last October. The New York Times also announced his resignation last October. He had enjoyed a long career that included two Pulitzer Prizes and one with his wife, Sheryl WuDunn, a former correspondent.

He has raised $2.75million in campaign donations. He can keep it to give to other candidates, or to use in his next run for office. Kristof stated that he isn't sure what he will do with the money.

"Sheryl, I will take some time to just relax for the first time in quite a while and think it through. What exactly do I do next? Kristof stated that she didn't know what to do next after the Supreme Court's decision.

He stated that he will continue to be involved in issues that he is passionate about and has written about. These include homelessness, mental illness, drug treatment, and efforts to create employment and increase wages. His farm also produces pinot noir grapes and chardonnay grapes, the first harvest of which is expected to be this year.

Kristof had been asking questions about Kristof’s residency since before he announced his candidacy. Oregon law requires that candidates for governor have lived in Oregon for at least three consecutive years prior to the election.

Kristof stated that his legal advisors had indicated that it would not be a problem. In a newspaper opinion piece, three former Oregon secretaries of states sided with Kristof.

Kristof stated that the Supreme Court's decision was unexpected.

He said, "I have a lot respect for the Oregon Supreme Court." "I believe they are smart lawyers. Although I'm disappointed with their decision, smart people can disagree. They are not to be questioned in any way."

In January, the Oregon Elections Director Deborah Scroggin (and Compliance Specialist Lydia Plukchi) told Kristof that they had rejected his application to become governor of Oregon. They said that he did not meet the constitutional requirements for being a candidate.

Shemia Fagan, the Oregon Secretary of State, agreed with reporters back then. She said that Kristof's claim of being an Oregon resident for the past few years "just doesn’t pass the smell-test."

Kristof was a foreign correspondent and columnist who lived in New York and overseas. However, he claimed that he never lost his claim to Oregon residency.

Kristof's residency should not be an issue if he decides to run again for office. He claims he is in Oregon to stay.

He said, "The farm will become my home until my last breath. My ashes will be scattered on the farm."

He was running for the Democratic nomination. The party's nominee will be elected in the May 17 primary. The front-runners now include Tina Kotek, former Oregon House Speaker, and Tobias Read, state Treasurer.

Kotek tweeted after the Supreme Court decision was published that Kristof's voice would "continue to be important as Oregon tackles its biggest problems." As a fellow Democrat, I look forward to working alongside him."

Read tried to win Kristof's support by claiming that "we all want someone who will challenge and uphold the status quo".

Reed tweeted his praise for Kristof, writing: "Your passion to help the homeless and create opportunities in rural Oregon are inspiring."

State Rep. Christine Drazan, ex-Republican nominee Bud Pierce, and Sandy Mayor Stan Pulliam are among the Republicans who are seeking to be nominated for their party's nomination.

Betsy Johnson, a former Democratic state senator, is now running as an Independent.