"End of abundance": "Macron's message will be difficult to understand beyond the elites"

The picture is dark. 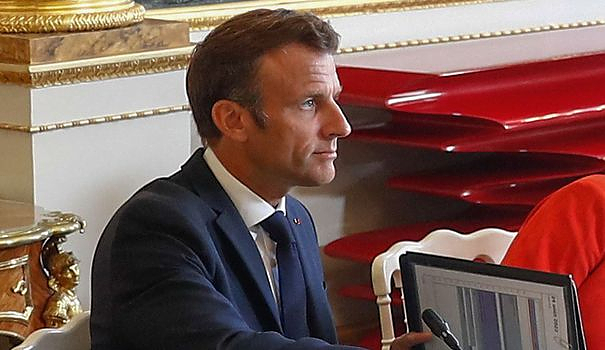 The picture is dark. This Wednesday, August 24, in the preamble to a Council of Ministers back to the Elysée, Emmanuel Macron was particularly pessimistic. As if he wanted to prepare the French for difficult times and "sacrifices" in this period marked by a "series of serious crises", from the war in Ukraine to the drought.

"I believe that what we are experiencing is of the order of a great shift or a great upheaval", declared the President of the Republic during his speech exceptionally broadcast. "We are experiencing the end of what could appear to be abundance". For Emmanuel Macron, we are also experiencing the "end of evidence" with "the rise of illiberal regimes and the strengthening of authoritarian regimes" as well as "the end of a form of recklessness".

For Philippe Moreau-Chevrolet, professor of political communication at Sciences Po and president of the firm MCBG Conseil, the head of state wants to keep control of the situation but faces difficult to reconcile imperatives.

L'Express: Why did Emmanuel Macron use such anxiety-inducing terms? What was the objective pursued by the Head of State?

Philippe Moreau-Chevrolet: Emmanuel Macron is trying to regain control of the situation, at least in words, and he wants to show that he is not overwhelmed by it. He tries to give the impression that he has mastered this difficult political period. He also tries to gain height in order to try to reassure the French and to show that he has an overall view of the situation. But we can consider that this somewhat catastrophic discourse reflects a form of political impotence, even if it is perhaps temporary.

The Head of State faces imperatives that are very difficult to reconcile: the climate crisis with the need to support the economy, budgetary austerity versus the "whatever the cost" which is maintained in France as we saw it during the adoption of the bill on purchasing power, etc.

The executive is probably going through the most complex and difficult moment ever experienced in the history of the Fifth Republic: the government does not have an absolute majority in the Assembly, Emmanuel Macron was re-elected without any momentum and therefore a little by default, it has to manage two epidemics, Covid-19 and monkeypox, as well as an unprecedented climate crisis in a period marked by inflation and war in Ukraine.

Emmanuel Macron's message delivered this Wednesday is however ambiguous and it is not very understandable on the merits because we do not know if he takes note of the climate emergency or if he sends a message of budgetary austerity to come. We don't know if it prepares us for future disruptions in gas supplies. We do not know in the end if he speaks to the right or to the left. The President of the Republic is a good political commentator but in my opinion he did not send a good political message this Wednesday because we do not understand what he means or what he is preparing. It brings anxiety but it doesn't bring more clarity.

The French understand very well that we are living in a period of shortages and restrictions, and they experienced the drought very closely. They don't need us to give them an essay, but on the other hand they want to know what the President of the Republic is going to do tomorrow to improve or at least manage the situation. Emmanuel Macron could also have recalled that he introduced a single tax shield in Europe in order to protect the French on energy prices. In my opinion, therefore, it would be necessary to get out of a form of communicational paternalism to explain concretely what we are going to do in the face of these crises.

Doesn't this speech with a Churchillian accent which seems to predict "blood, toil, tears and sweat" risk appearing as offbeat or inappropriate in the eyes of the majority of French people?

We can see what Emmanuel Macron means, we all see that there is a historical change compared to the period of the Glorious Thirties. But this anxiety-provoking message will be difficult to understand beyond the elites because for most French people, the words carelessness and abundance are incomprehensible, they do not feel concerned.

Couldn't this pessimistic message have been delivered by Prime Minister Elisabeth Borne? Traditionally, a head of state reserves the good news for himself when the head of government collects the less good...

Emmanuel Macron wants to show that in this sequence, the real boss is him. The fact of not letting the Prime Minister make her political comeback is very significant: he is the boss and there is no other. This speech was therefore also a way for him to strongly and symbolically reaffirm his authority, but all this is a logical continuation of the presidentialization of the regime.

It is however surprising that the President of the Republic does not retain the possibility of having a Prime Minister who would serve as a fuse. One would have thought that this five-year term would mark the return of the Prime Minister, with a role that would be increased in view of the importance of Parliament, but this is not the case.

The macronism of the origins, synonymous with optimism, seems a long way off. Two years ago, Emmanuel Macron concluded a solemn address to the French with these words: "We will have better days and we will find happy days again. I am convinced of it"...

It has been about a month since the head of state has been issuing warnings that are intended to be Churchillian. He likes to have a posture of President who prepares the country for difficult situations, a bit of a posture of the hero who will save his people from the perils and difficulties in time of war.

Emmanuel Macron has already made somewhat negative speeches, but in general it was for him to show that there were solutions at the same time. But here, in this intervention, we don't really see a solution and we don't really see where this is leading us.