Elections underway for the presidency of East Timor

Nearly one million East Timorese voted for President Saturday, in an election that will test their stability in the face of a prolonged political crisis and economic uncertainty. 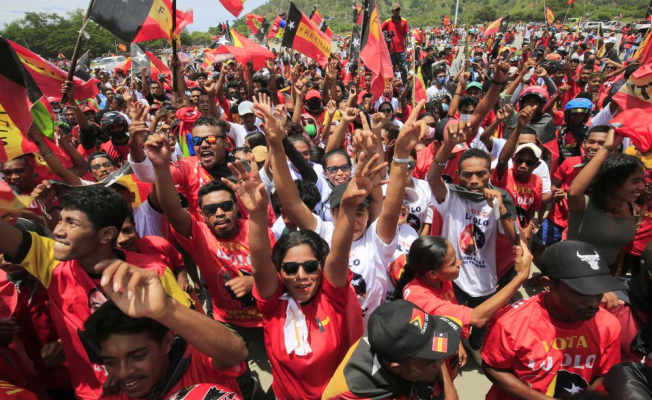 As polling booths opened in Dili (the capital) and other parts of the country, voters lined up to cast their votes.

Francisco "Lu Olo", 67, an ex-guerilla leader of the Revolutionary Front for an Independent East Timor Party, better known locally as Fretilin is running against 15 other candidates.

Guterres said that he was confident that he would win the election again after casting his vote at Dili. "I appeal to people to accept the results and I'm ready to work alongside whoever wins this election."

Surveys revealed that Guterres (and former President Jose Ramos-Horta) were among the top-rankers, with Ramos-Horta at the head.

Ramos-Horta (72), a Nobel Peace Prize winner, is backed CNRT by the National Congress of the Reconstruction of East Timor. This party is led by former Prime Minister Xanana Guismao, an ex leader of the resistance who continues to be influential.

Over 835,000 people in the country are registered to vote. The winner will take the oath to office on Sunday, to commemorate the 20th anniversary East Timor's independence form Indonesia, which invaded the former Portuguese colony back in 1975.

If no candidate secures more that 50% of the votes, the second round will be held on April 19.

The transition from East Timor to democracy has been difficult. Leaders have struggled with poverty, unemployment, and corruption while the country continues to recover its bloody independence 20 years ago. An economy that relies on oil revenues offshore and bitter factional politics, which occasionally escalated into violence, has also made it difficult for the country to become a democracy.

After the government failed repeatedly to pass a budget, tensions between Fretilin (the largest party) and CNRT led to the resignation in February 2020 of Prime Minister Taur Ruak.

Ruak accepted to remain on until a new government was formed. He will also oversee the fight against the coronavirus pandemic, which has a $250 million war fund. His government has not had an annual budget. Instead, it relies on monthly injections from the Petroleum Fund, its sovereign fund savings.

Guterres declined to swear in nearly all Cabinet nominees for 2018, so the government now includes ministers from two smaller parties, and many portfolios that remain vacant.

CNRT accused Guterres, Fretilin and other members of the CNRT of violating the Constitution and illegally seizing their position as speaker of parliament.

Fretilin stated that Horta was not fit to be president. He also accused Horta of creating a crisis in 2006 as prime minister, when many were killed due to political rivalries.

In 2018, a clash between Fretilin supporters and CNRT supporters broke out, leaving over a dozen people injured and cars burning.

The campaign, punctuated by political accusations being traded between parties, was over on Wednesday without any major incidents.

Joaquim Fonseca is a political analyst at RENETIL. This youth organization was established during Indonesian occupation of East Timor. He stated that it would be difficult for one party to gain a majority in parliament and form a government by itself. To form a government, political parties will need to rely on coalitions.

Fonseca, East Timor's former Ambassador to the United Kingdom, stated that "This remains a challenge" for both candidates. "At this stage, it is not certain that either candidate will bring about the desired changes."

According to the U.N., nearly half of East Timor’s population live below $1.90 per day extreme poverty level. Half of East Timor's children are affected by malnutrition.

Lucio Cardozo, a Dili resident, said that "I hope the winning president will look out for the clean water and the roads to villages, and health facilities."

According to La'o Hamutuk (an East Timorese research center), oil revenues, which fund more than 90% government spending, are declining rapidly. The country's almost $19 billion sovereign wealth fund, which is nearly $19 Billion, could soon be depleted as its annual withdrawals exceed their investment returns.

Over 30% of East Timor's population is unliterate. However, the top 10% of East Timor's wealthiest earn more than 42% of the national average, while the bottom 50% take only 16%, according to Dinna Prapto Raharja (international relations analyst, founder of Synergy Policies), an independent consulting company based in Jakarta.

She stated that "this is a huge gap that's difficult to bridge unless there are fundamental governance changes from the 2022 election winner."

Raharja stated that the elite might need to talk about different models of sharing power.