Supporters of former Brazilian President Jair Bolsonaro have stormed the congress in the capital Brasília. 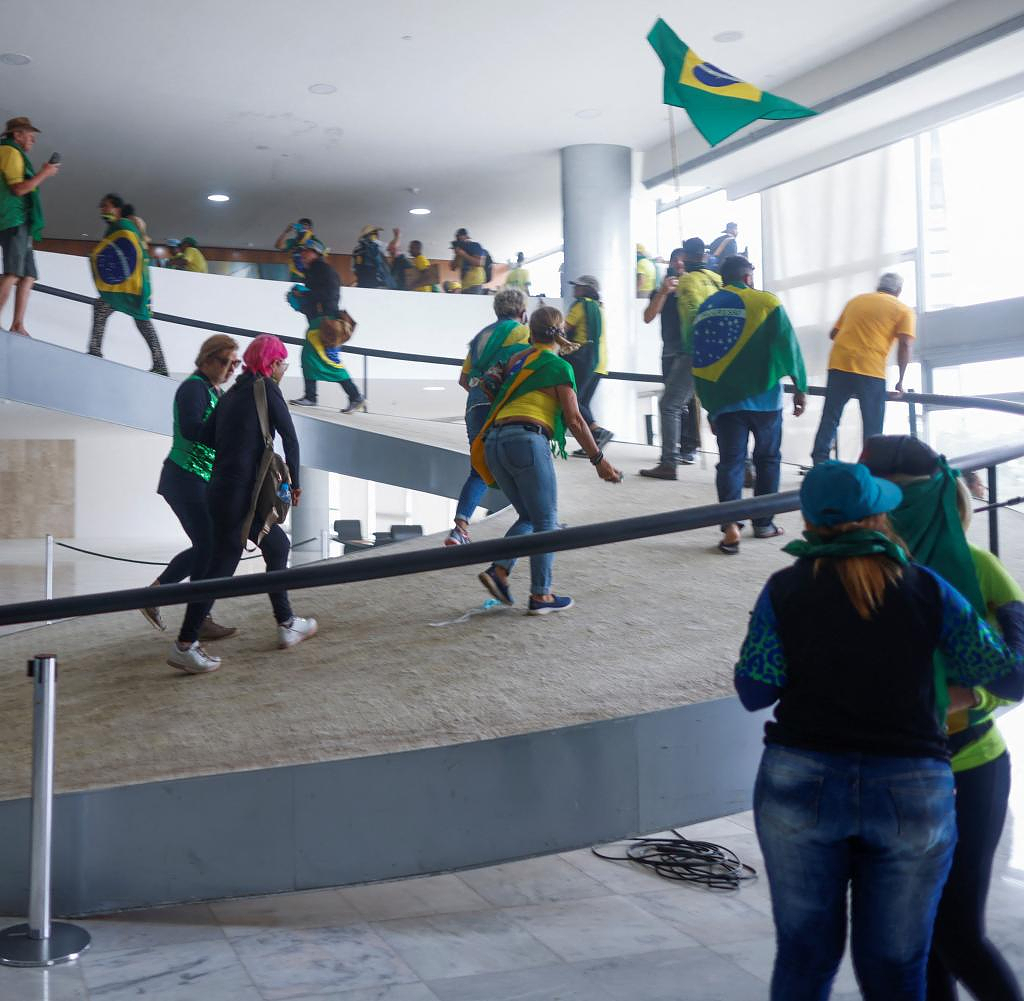 Supporters of former Brazilian President Jair Bolsonaro have stormed the congress in the capital Brasília. They smashed the windows of the facade and entered the entrance hall, as was seen on Globo TV on Sunday.

According to media reports, the security forces regained control of the three branches of government later in the day. Television showed dozens of demonstrators being taken away in handcuffs.

Hundreds of demonstrators had previously entered the Parliament premises and climbed onto the roof of the building. Police used pepper spray and stun grenades but were unable to stop supporters of former right-wing leader Bolsonaro.

"I condemn these anti-democratic acts that urgently need to be punished with the harshness of the law," Senate President Rodrigo Pacheco wrote on Twitter. “I was on the phone with Federal District Governor Ibaneis Rocha, with whom I am in regular contact. The governor informed me that the entire police force is focused on bringing the situation under control.”

Photos were uploaded to online networks that brought back memories of the storming of the US Capitol on January 6, 2021. Bolsonaro supporters broke through police barriers and entered the Congress building, according to videos circulating on online networks. They smashed doors and windows and then poured into the building in large numbers.

You could see devastated MP offices and demonstrators who climbed onto the seats in the Senate. The images also showed demonstrators storming the nearby Planalto Presidential Palace and the Supreme Court. Many invaders wore yellow clothing and waved the Brazilian flag.

The damage in the three buildings, which are considered icons of modern architecture and house numerous works of art, appeared to be considerable.

Video showed the crowd outside Congress dragging a police officer from his horse and beating him.

The area near the Square of the Three Powers, where the Congress, the Presidential Palace Planalto and the Supreme Court are close together, had been cordoned off by the authorities. However, Bolsonaro's supporters were able to overcome the barriers. The security forces seemed completely overwhelmed and tried in vain to push the people back with tear gas.

Scores of Bolsonaro supporters ran up the ramp to the Congress building to occupy the building's roof, an AFP photographer observed. There they unfurled a banner that read "Intervention" - a call to the Brazilian military. Numerous Bolsonaro supporters also gathered on the surrounding lawns and squares and in front of the Planalto presidential palace.

President Lula was absent from the capital on Sunday but paid a visit to the city of Araraquara in the southeastern state of São Paulo. It was devastated by floods in late 2022. Lula condemned the attack in the capital Brasília. "All vandals will be found and punished," said the head of state on Sunday. "We will also find out who funded it." By decree, Lula ordered that the federal government assume responsibility for public safety in Brasília.

Bolsonaro condemned the attack by his radical supporters on the government district in the capital Brasília. “Peaceful demonstrations are part of democracy. Looting and raids on public buildings, as they took place today, are not included," wrote the right-wing ex-head of state on Sunday (local time) on Twitter. "Throughout my tenure, I have always upheld the Constitution, respected and defended the law, democracy, transparency and our sacred freedom."

After the attack on government buildings, the security chief of the capital Brasília, Anderson Torres, has been fired. "I have decided to dismiss the Minister of Security of the Federal District and at the same time sent all security forces into the streets to arrest and punish those responsible," Federal District Governor Ibaneis Rocha wrote on Twitter. "I am in Brasília to observe the demonstrations and take all measures to curb the anti-democracy riots in the government district."

The head of the ruling Workers' Party (PT) had previously made serious allegations against those responsible in the capital Brasília. "The federal district government was irresponsible in the face of the invasion of Brasília and the National Congress," Gleisi Hoffmann wrote on Twitter on Sunday. “It was an announced crime against democracy, against the will of the voters and for other interests. The governor and his secretary of security, a Bolsonaro supporter, are responsible for everything that happens.”

The incident came a week after the inauguration of new left-wing President Luiz Inácio Lula da Silva. Lula, who has been the idol of the Latin American left for years, won the runoff election for the presidency on October 30 by a razor-thin margin over Bolsonaro. Bolsonaro never explicitly acknowledged his electoral defeat. Even after the election, radical supporters of the ex-military had repeatedly protested against Lula's victory and called on the country's armed forces to stage a military coup.

Contrary to custom, Bolsonaro did not attend the inauguration of his successor Lula on New Year's Day and flew to the United States with his family.

‹ ›
Keywords:
NewsteamBrasilienPolitikBolsonaroJairApple PodcastGloboDie LinkePlanaltoBrasiliaTwitterJair BolsonaroKrimiBrasilienPolizei
Your comment has been forwarded to the administrator for approval.×
Warning! Will constitute a criminal offense, illegal, threatening, offensive, insulting and swearing, derogatory, defamatory, vulgar, pornographic, indecent, personality rights, damaging or similar nature in the nature of all kinds of financial content, legal, criminal and administrative responsibility for the content of the sender member / members are belong.
Related News