According to a spokesman, Zelenskyy was involved in a car accident in Kyiv

According to his spokesman in Kyiv, Ukrainian President Volodymyr Zelenskyy was involved in a car accident. 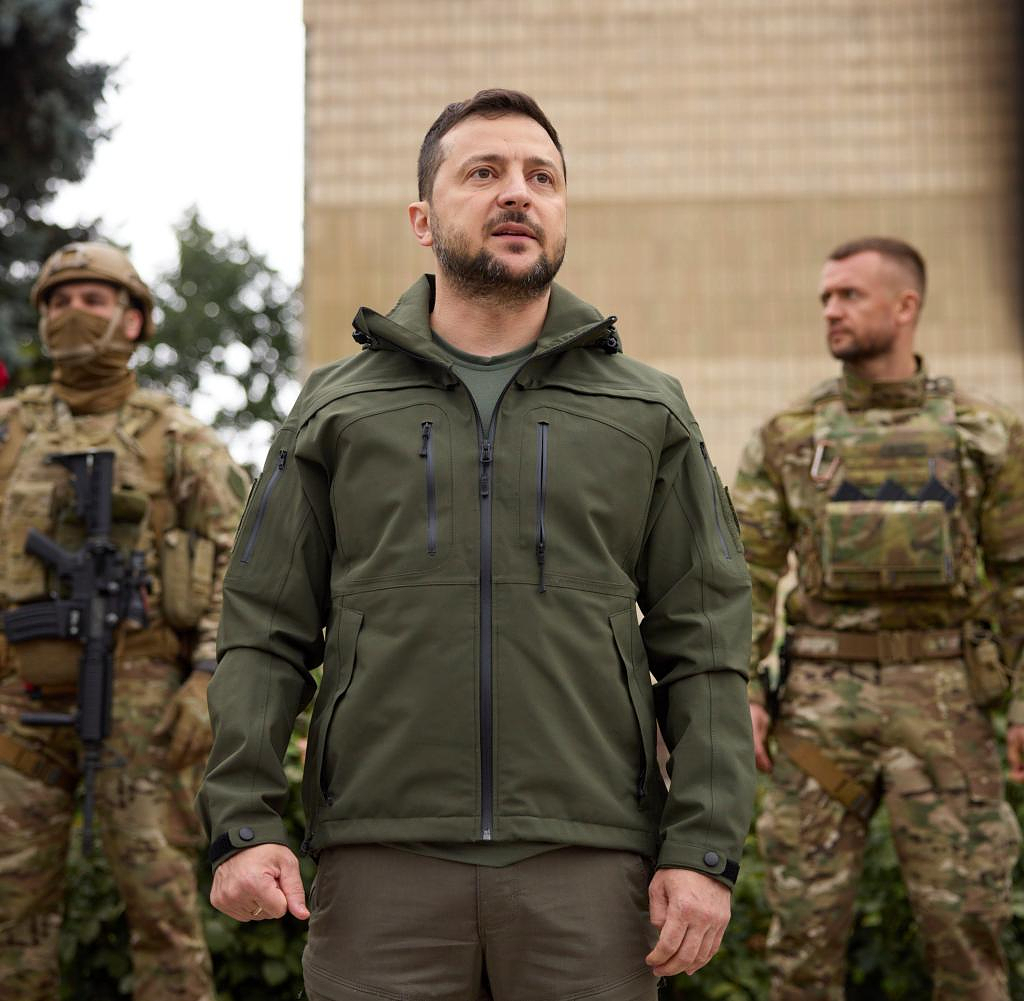 According to his spokesman in Kyiv, Ukrainian President Volodymyr Zelenskyy was involved in a car accident. A vehicle collided with the head of state's car and the escort vehicles, spokesman Serhiy Nykyforov wrote on Facebook early Thursday morning.

Selenskyj was examined by a doctor. "No serious injuries were found." Further details about his state of health were not initially given.

Zelenskyj's car collided with a private vehicle, the spokesman said. He did not say when the accident happened. Paramedics accompanying Zelenskyy administered first aid to the driver of the other vehicle and called an ambulance. The accident is being investigated.

On Wednesday, Selenskyj visited the city of Izyum in eastern Ukraine, which had been recaptured a few days ago.

"You gave the world hope again," said Vice-Chancellor Robert Habeck at a joint press conference with Ukraine's Economy Minister Julia Swyrydenko at the G7 trade ministers' meeting in Brandenburg. The courage of Ukraine in the fight against Russia is impressive.

According to the British Ministry of Defence, Ukraine is consolidating its control of the recaptured areas in the Kharkiv region. The Russian troops have largely withdrawn west of the Oskil River, the ministry said.

According to a report by the Russian news agency Interfax, Russian President Vladimir Putin has arrived in Uzbekistan, where he is to attend the summit of the Shanghai Cooperation Organization. On the sidelines of the meeting in the city of Samarkand, Putin will meet with Chinese leader Xi Jinping. The meeting is scheduled for early afternoon (local time), according to a schedule handed out to media representatives by the Russian delegation. According to Russian information, the two heads of state will discuss Ukraine and Taiwan, as well as bilateral issues.

China is Russia's largest buyer of oil. The Uzbek government announced that Putin will meet other heads of state and government in Samarkand on Thursday, including Iran and Pakistan. According to Russian information, the meeting with Turkish President Recep Tayyip Erdogan on Friday will be about the implementation of the grain agreement that regulates exports from Ukraine.

According to the government in Moscow, the Russian and Chinese navies have launched a joint military exercise in the Pacific. The training includes tactical maneuvers and the use of artillery and helicopters, the Russian Defense Ministry said on the short message service Telegram. The aim is to "maintain peace and stability in the Asia-Pacific region". In October 2021, Russian and Chinese warships undertook joint patrols in the western Pacific for the first time, in what Japan had described as an "unusual" maneuver at the time. Russia's military and diplomatic rapprochement with China is viewed with concern in the West.

The Russian attack on Ukraine triggered a wave of willingness to help in Germany that continues to this day. This is the result of a current study by the German Center for Integration and Migration Research (DEZIM). However, the study, which is available to the dpa news agency and is based on two representative surveys, also shows that the willingness to support refugees from Ukraine has decreased somewhat since the first days of the war.

At the beginning of March, more than one in four (27 percent) were willing to temporarily take in refugees from Ukraine in their own homes, but the proportion of those for whom this would be conceivable later fell to 17 percent.

As the study also shows, almost every second person (47 percent) could still imagine volunteering for war refugees from Ukraine in the summer. According to Dezim, in March it was still 58 percent.

The willingness to donate money for refugees from Ukraine has also fallen slightly. In March, 69 percent of those surveyed were still willing to do so. In the summer, the willingness to donate was 58 percent. However, the situation of the refugees had changed between the first survey in early March and the second survey - between the end of June and the beginning of August. While Ukraine refugees were initially entitled to care under the Asylum Seekers Benefits Act, they have received basic security since June, i.e. the same benefits as Hartz IV recipients.

According to official sources, the drinking water supply in the Ukrainian city of Kryvyi Rih was destroyed after eight Russian cruise missiles fired on it. “The water pumping station was destroyed. The river has breached the dam and burst its banks. The apartment buildings are just a few meters from the river,” Ukrainian MP Inna Sovsun said on Twitter. Before the war, the city in southern Ukraine had around 650,000 inhabitants.

According to his spokesman, the car of Ukrainian President Volodymyr Zelenskyy was involved in a traffic accident in Kyiv. "Zelenskyj is not seriously injured," writes Serhiy Nykyforov on Facebook.

After a phone call with Russian President Vladimir Putin, UN Secretary-General António Guterres has little hope of peace in Ukraine anytime soon. "I feel like we're a long way from peace," Guterres said. "I have no illusions. At the moment, the chances of a peace deal are minimal,” he added. Even a ceasefire is "not in sight".

Guterres said he spoke to Putin about efforts to overcome "barriers" to Russian food and fertilizer exports. It was about an extension and a possible expansion of exports as part of an agreement brokered by the UN and Turkey.

According to Prime Minister Irakli Garibaschvili, Georgia intends to meet the twelve criteria set by the EU for opening accession talks very quickly. He will also offer the opposition a dialogue in order to have them on board for the necessary reforms, said Garibaschvili after a meeting with Chancellor Olaf Scholz. The European Union (EU) gave the country the prospect of accession in June, along with Ukraine and Moldova. Garibaschvili did not want to say how many years he sees his country in the EU.

According to the authorities, the central Ukrainian industrial city of Kryvyi Rih was hit by Russian cruise missiles. The head of the administration of the Dnipropetrovsk region, Valentin Resnichenko, said that hydrotechnical systems were badly damaged by the "massive rocket attack". The water supply had failed in some parts of the city. Unverified videos also showed that the Ingulez River was rising rapidly. The river is dammed in front of the city.

‹ ›
Keywords:
TexttospeechUkraineNewsteamRusslandUkraineKrieg (24.2.2022)RusslandSelenskyjWolodymyrKiewWolodymyr SelenskyjSpotifyPolitikSamarkandUkraineFlüchtlingeKrywyj RihWladimir PutinChinaApplePazifikCharkiwIsjumOstukraineGeorgienGroßbritannienSerhij NykyforowTwitterBayernFunke MediengruppeUsbekistanFacebook
Your comment has been forwarded to the administrator for approval.×
Warning! Will constitute a criminal offense, illegal, threatening, offensive, insulting and swearing, derogatory, defamatory, vulgar, pornographic, indecent, personality rights, damaging or similar nature in the nature of all kinds of financial content, legal, criminal and administrative responsibility for the content of the sender member / members are belong.
Related News