Protest against police laws: With all his Power against the suspected

"freedom is dying with security": In North Rhine-Westphalia and lower Saxony of thousands against planned police laws protest. "Santa Claus in prison – bec 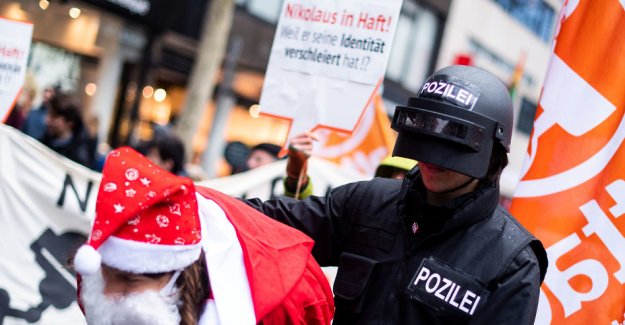 "freedom is dying with security": In North Rhine-Westphalia and lower Saxony of thousands against planned police laws protest.

"Santa Claus in prison – because he has concealed his identity?" Not only Nicholas conservationists protested in Düsseldorf and Hannover photo: Reuters

DÜSSELDORF/HANNOVER epd | thousands of people demonstrated on Saturday in Düsseldorf and Hannover against the planned police laws for the state of North Rhine-Westphalia and lower Saxony. The organizers spoke of more than 10,000 participants, each of about 5,000. The police counted in Hanover, initially as 2,000 protesters.

The planned law would be another step on the road to an authoritarian police state, the civil rights limited, said a spokeswoman for the Alliance "#NoNPOG" in Hannover the epd. There is a coalition of about 150 partners, had called for the protests, including trade unions, environmental groups, anti-fascist initiatives, parties like the Left and the Green party and its youth organizations.

said The Green-Chairman Anne Kura, the new law violates the fundamental rights, to promise, without security. "The mere suspicion should be enough, so the police can monitor phones and E-mail interception."

lower Saxony have recorded in the past year, the lowest number of registered crimes for the last ten years, and have the second highest clear-up rate, said Kura. "Our society is not so sure for how long." You need to, you rather, a better equipment of the police.

In lower Saxony, the renewal of the police act is one of the Central projects of the red-black coalition government. The SPD and the CDU had announced in its coalition agreement to pass the bill until the end of the year.

In NRW want to bring the CDU and the FDP, with its government majority, in the meantime, multiple changes in the draft law in the coming week by the state legislature. At the kick-off rally on Saturday, a spokesman for the host warned of the Committee for basic rights and democracy a future "criminalization of protests" and a "demise of a free society".

protesters accused the NRW state government to operate with the submitted Changes to the planned law is just window dressing. The new police act should extend the powers of the police about the Surveillance of digital communications and dealing with Gefährdern. The NRW state government had shifted to the criticism of the draft of the original was passed in the diet, and Changes in October, submitted.

emerging Fears continue to be a "massive displacement of police Intervention", and a possible future "occasion, extension of police powers," it said in the Talk. As before, to reject the plans as an attack on the freedom and fundamental rights.