It was the chinese businessman Kevin Liu, Wenxuan, who, along with ambassador Anna Lindstedt negotiated the release of the imprisoned publisher Gui Minhai at Ho 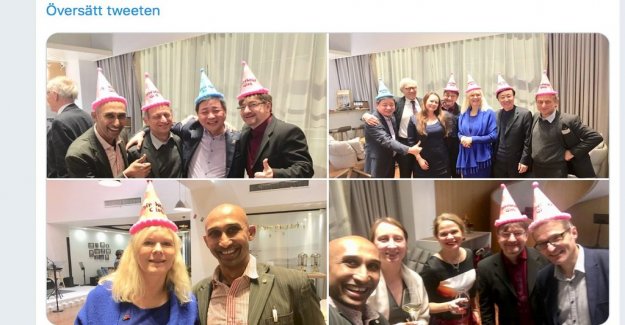 It was the chinese businessman Kevin Liu, Wenxuan, who, along with ambassador Anna Lindstedt negotiated the release of the imprisoned publisher Gui Minhai at Hotel Sheraton in Stockholm.

Kevin Liu runs the company MiNiSV Holding and is described as a billionaire with large interests in Sweden, and with a large network of contacts. He is often seen on the image with the well-known politicians. During the weeks leading up to the meeting at the Sheraton in Stockholm on 24 and 25 January, he met Anna Lindstedt several times.

Pictures taken by his business partner John Meewella and has been posted on Twitter showing the businessman with the ambassador at a variety of occasions.

Several of the photos are from a several days long trip to the city of Nanjing.

the Businessman and the ambassador bowls, eat dinner, and meet at conferences.

In the picture at the top-right Sweden China-ambassador Anna Lindstedt bowls with billionaire Kevin Liu in the beginning of January of this year in Nanjing, China. Photo: Screenshot of John Meewella

Some images show the ambassador in partyhatt during the celebration of the Swedish professor's birthday.

It was ambassador Anna Lindstedt, who invited the imprisoned publisher Gui Minhais daughter Angela to the meeting at the Sheraton.

After the disclosure of ambassador Anna Lindstedts involvement in the negotiations is being investigated by the secret Police, suspected of egenmäktighet in negotiation with the state. The investigation is led by Riksenheten for national security.

John Meewella, who is resident in Finland, has previously been registered in Sweden and is a board member of several Swedish companies. He was with during the meeting at the Sheraton, but would not comment on either the meeting or the pictures.

Kevin Liu and Anna Lindstedt met even on Swedish soil for only a few weeks ago. Photo: Screenshot of John Meewella

Former minister Kristina Persson (S) during a conference in Beijing as ambassador Anna Lindstedt arranged in January and also met with her businessman Kevin Liu. The question if the Gui Minhai was not addressed then, according to the ex-minister.

" I was a little puzzled over who he was actually, he had strong links to universities and research activities at the same time that he was a businessman, so I understood like never really. He was very interested in contacts with Sweden but never mentioned Gui Minhai, or that they would come to Sweden, " said Kristina Persson.

On the way home to Sweden ended up Kristina Persson on the same flight as the trader's partner, John Meewella. Then she got to know about the upcoming meeting of the Gui Minhai.

– Then, they mentioned that they would have a meeting. But not any details about the circumstances, " says Kristina Persson.

Ambassador Anna Lindstedt (to the right) put an arm around miljardärens shoulders during an event in Beijing on 21 January. Photo: Screenshot of John Meewella

John Meewellas pictures on Twitter also shows the chinese ambassador in Stockholm together with businessman Kevin Liu and Anna Lindstedt.

The chinese embassy has in the past denied any involvement in the meetings.

the DN has searched Anna Lindstedt for a comment.