Coronavirus : déconfinement, economy, racism... What we need to remember the address of Macron

Three months after the announcement of the containment ; a month after the beginning of the déconfinement... Emmanuel Macron has solemnly addressed the Nation o 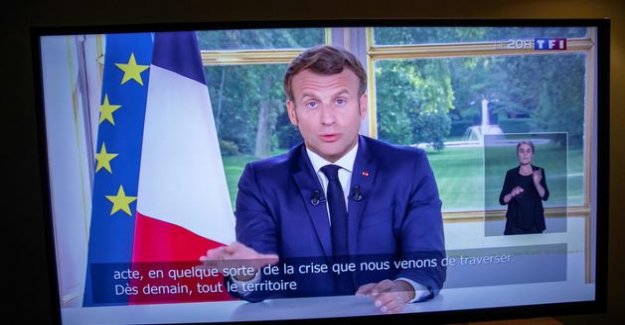 Three months after the announcement of the containment ; a month after the beginning of the déconfinement... Emmanuel Macron has solemnly addressed the Nation on Sunday evening, during a televised speech pronounced from the Elysée palace - the fourth since the beginning of the health crisis. While the situation of the epidemic improves, and that the social climate is deteriorating in the country, the speech of the president of the Republic was highly anticipated by the French. Especially as the projects economic that open promise to be huge, so that several hundreds of thousands of jobs in almost all sectors of activity may be weakened.

LIVE - Speech of Emmanuel Macron : "The Republic will not erase any trace of its history"

● All the metropolitan France goes green on June 15

On the map of the déconfinement, the whole of the metropolitan France now appears in green. The Île-de-France, which is out of orange, will begin his déconfinement total as of Monday. "We will be able to find the pleasure to be together, to fully resume the work, but also to entertain us, we cultivate. We will find our way of life, our taste for freedom. In sum, we will fully regain France", stressed the president.

● "The virus is still circulating actively" in Mayotte and Guyana, which remain orange

Unlike the rest of the territory, Mayotte and French Guiana will remain classified orange on the health map. "The virus is still circulating actively," said Emmanuel Macron.

The rumor for several days. As expected, the president of the Republic has announced the reopening of cafés and restaurants throughout the territory, and, therefore, in the Île-de-France as early as Monday. Since 2 June, the restaurants in the île de france had permission to open their patio to the customer.

"nurseries, schools, colleges are preparing to welcome from June 22, all students on a mandatory basis and according to the rules of normal presence", said Emmanuel Macron.

● "The second round of the municipal will take place on June 28,"

the postponement of The elections was an option in the event of a health situation deteriorated. Finally, the second round of municipal elections and local authorities may well be held on 28 June, announced the head of the State. Some 5,000 municipalities must still designate their municipal council to the full, under sanitary conditions, strict – with mask-wearing compulsory to vote.

read also : Will you vote for in the second round of the municipal?● Travel in Europe authorized as of June 15

Europe déconfine. While all the Schengen countries have closed their national borders during the health crisis, Emmanuel Macron has announced that from tomorrow (Monday, editor's NOTE) it will again be possible to travel in european countries". The president of the Republic has not, however, specified the terms and conditions of these journeys : he has not mentioned any quatorzaine.

● travel outside Europe authorised from the 1st of July

The French will they be able to go on holiday this year ? "The summer of 2020 will not be a summer like the others," said Emmanuel Macron. However, from 1 July, we will be able to make it in the States outside of Europe where the epidemic will be controlled," said the head of State. Again, it has not specified the conditions of such movements, and it has not pronounced on an eventual quatorzaine.

● visits "shall be permitted" in the long-term care Facility

Private visit since 11 march, the older people present in retirement homes or in long-term care facilities will be able to again see their loved ones. Visits "shall be allowed", said the head of the State.

● Avoid to the maximum the gatherings, which will remain "very supervised"

Avoid the risk of relapse. To not precipitate a possible second wave, Emmanuel Macron has announced that it will be necessary to continue to avoid gatherings, because they are the main opportunity for the virus to spread". "They will be so very supervised", he warned, without being able to fix specific terms and conditions and the timetable clear.

● Works, statues... "The Republic will not erase any trace of its history"

A response to the excesses of "anti-racism". The head of State has warned of the risk of transformation of a "combat-noble" in a "communitarianism" or "rewriting hateful or false of the past". "This fight is unacceptable when it is retrieved by the separatists", says he. "The Republic will not erase any trace of it or any name of its history . She will not forget any of his works, it does déboulonnera no statue", he insisted, while statues related to the history of slavery have been vandalized recently by activists in Martinique, Belgium or the Uk. The president has instead called the "will to truth" in the face of "our history", "our memories" and in particular "our relationship with Africa".

read also : Macron remains vigilant in the face of the drift of the identity of the anti-racism● cops "deserve the gratitude of the Nation"

He did not utter the expression "police violence". While many protests have been organized a little everywhere in the country, in the wake of the mobilization in the United States after the death of the Afro-American George Floyd, Emmanuel Macron has supported the forces of law and order. The police and gendarmes "are exposed to risks daily, which is why they deserve the support of the public power and the gratitude of the nation", he argued, convinced that "without a republican order, there is neither security nor freedom".

in The aftermath of protests against the "police brutality" and racism in the cities of France, Emmanuel Macron has called to be "unrelenting in the face of racism, anti-semitism and discrimination". "New strong decisions for equal opportunities will be taken", he said.

As the government ensures it for several weeks already, Emmanuel Macron has confirmed that this crisis would not lead to an increase of taxation. Although the expenditures related to the health crisis, "justify", it considers that"they come to add to our debt already existing". To finance it, the president does not have a tax increase : "Our country already has a tax system very cumbersome, even if in the past three years, we the lower".

● A new speech July, to "specify a new path"

pension Reform, overhaul... What are the policy lessons of the crisis ? "I'll speak to you in July to specify this new path, launching the first actions. And this will not stop," said the president of the Republic. "We have before us of the historical challenges. To address the challenges, let us never forget our strengths, our history, our youth, our sense of hard work and commitment, our commitment to justice, our capacity to create, to live and change the world, our benevolence."

● "Our weaknesses, we will correct hard and fast"

Convinced that the health crisis has revealed "flaws", the head of State has sketched out a horizon of"post-crisis". "Our forces, we conforterons. Our weaknesses, we will correct it fast and strong," he said. This "new stage" will be built around several priorities, including the"independence" of the economic France, and the union of French "around the republican patriotism".

Restart the machine. After having defended the measures taken by the government for the past three months - the "what it costs" to the plans "massive" for the aeronautics, automotive, culture and tourism, Emmanuel Macron has promised to "engage" to set out "fully" in our economy. "The global economy has almost stopped, our first priority is to rebuild a strong economy, ecological, sovereignty and solidarity", he pleaded.

The famous 'world after' materializes little by little. It is in this logic that Emmanuel Macron has said they want to "create the jobs of tomorrow". It calls for this to be a "green industry", "social solidarity" that will allow according to him to "reconcile production and climate". Attractiveness and the relocation must be at the heart of this new "growth pact", he added.

● massive Investment for the education, training and employment of youth

the president of the Republic assured, he wishes to make the economic recovery a recovery "based on solidarity". To do this, he promises today "a massive investment for the education, training and employment of our youth". "We owe him", he added, specifying that the future generations would pay the ecological debt of our country.