African media artist in Karlsruhe: The open veins of Africa

The Karlsruhe exhibition does away with the cliché image of Africa as the "information technological dark continent". François Knoetze, to address the "Cor 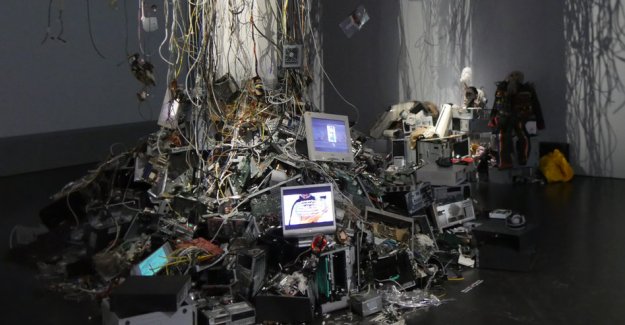 The Karlsruhe exhibition does away with the cliché image of Africa as the "information technological dark continent".

François Knoetze, to address the "Core Dump" the recovery of noble metals on garbage dumps in Nigeria, photo: ZKM

The exhibition "Digital Imaginaries – Africa's in Production" in the media art Museum, ZKM Karlsruhe, discovered the African continent as an IT Hub. Meanwhile, globally successful Apps such as M-Pesa or Ushahido, which were originally developed in Africa, will be presented. African media artist with time dystopian, and sometimes ironic works are invited. First of all it is adopted with the exhibition brilliant from the cliché image of Africa as the "information technological dark continent".

the Central theme of the neo-colonial conditions of Exploitation in the global IT Economy, under which Africa's population suffers from extreme. The beginning of the recovery cycle, the working conditions at the Mine make more rare metals such as Coltan for Capacitors essential to the Congo, but a decades-long commodity war.

The end of the cycle, represent the heaps of electronic scrap, on which, especially on the outskirts of cities in Nigeria – children and young people on the plastic insulation flaring, in order to get to the rare metals.

This aspect of the South African artist, Francois Knoetze spectacular in his Installation "Core Dump". Loose cable ends hang down from the ceiling. You have from the top of a pyramid made out of salvaged computers, Smartphones and 3-D printers. In this sculpture monitors are integrated, the earlier video works and Interviews Knoetzes show. On the screens to the right and to the left of the scrap metal sculpture of a movie, the Knoetze shot in Cape town and Karlsruhe, Germany is running.

African protagonists are mutants, genetically altered by the radiation from the devices. At the same time, they themselves are Commodities. In a Ritual, one of them chopped off the hands: Instead of blood Coltan falling chunks from the Armstümpfen. The scene is an ingenious Transfer of Eduardo Galeanos classic "open veins of Latin America" on the African continent.

Rather ambivalent, between dystopia and utopia swaying, is the animated film "Mad Horse City". The artist and architect Olalekan Jeyifous, and the writer and publisher, Wale Lawal present here a digital three-class society in which it is for the Better-off as attractive, to be offline, while simple fishermen risk their lives if they try to escape the sea monitoring. Jeyifous designs in the Lagos of the year 2115 as a vibrant Mega-City, in information flows and organic shapes merge with each other.

pragmatic reasons, as the now time to the project, Agbogbloshie Makerspace Platform (AMP) is facing. The core element of an IT infrastructure-working platform of approximately 3 x 3 meters of floor space and an existing casing with hanging devices. It was made in Ghana and serves workers in the electronic waste dumps, your knowledge of the mountains, but also Repair of components and reconstitution add devices to share and Refine.

AMP not condemned the practices of Exploitation on the garbage dumps, but to generate Knowledge. Prototypes of the platform were also in the Afro-pixel Festival in Dakar, a partner organization of the ZKM in the context of the exhibition. The specimen in Karlsruhe will soon be using a device for measuring the air quality and data with other locations to exchange.

furthermore, you will be introduced to numerous Apps out of Africa: the Cardiopad, developed by an engineer from Cameroon, to measure the heartbeat and sends the data to a heart specialist. In a country that had, at the time of the development of the App, only 50 cardiologists for a population of 20 million people, a potentially life-saving Instrument. The App is also being sold in India and Nepal.

M-Pesa in 2007, Kenya developed that allows payments via mobile phones, replacing the – at least at the time in rural regions of weak banking sector. The Kenyan-developed Ushahidi platform combines geographic data with information about politics and the economy. She came out successful in the election observation and detection of electoral fraud, but also in the rescue and recovery activities immediately after the severe earthquake in Haiti in 2010 and Nepal in 2015, as well as for the evaluation of the damage to the environment on the occasion of the wreck of the drilling platform Deepwater Horizon in front of the US coast.

projects such as these paint a different picture of Africa, beyond the clichés from the suspended and ravaged continent. The classic exploitation and relationships of dependence will not be changed by a few successful Apps are fundamentally different, however, is also clear. In the exhibition a work is integrated, the discovery of the digital successful of Africa, regarded by art curators from the global North, ironically.

The artist group The Nest Collective created in the short film, "This One Went to the Market," an Afro-futuristic Performance icon, equipped with cables, the VR-glasses and dummies of the receiving devices. The alleged Cyber-Body-Art-pioneer black in addition, yet her face, in order to meet all the requirements of the global art market.