Valencia shoots up and touches the 10% year-on-year rise

Housing prices in the city of Valencia have skyrocketed in the last year. 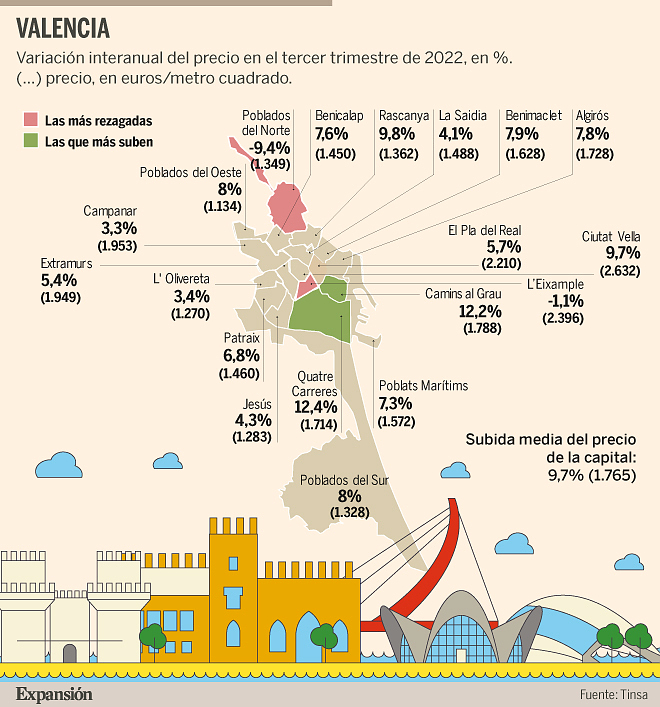 Housing prices in the city of Valencia have skyrocketed in the last year. According to Tinsa data, the year-on-year average is 9.7%. The province as a whole increased by 9.3%.

By neighborhood, Quatre Carreres, one of the areas of new construction in the town, recorded an increase of 12.4%, the largest in the city, followed by Camins al Grau.

These increases are also taking place with a significant volume of sales. The data for July shows an increase of 13.4% in the number of sales transactions in the Valencian Community. Fotocasa experts point out that this demand may lose power in the last part of the year, since investors were closing operations before the expected rise in interest rates took place.

The increase is also explained by the shortage of newly built housing in the capital, which limits supply and puts pressure on prices.

The exhaustion of prices stands out in some of the most expensive areas, such as L'Eixample, which fell by 1.1%, to 2,396 euros. Ciutat Vella, the old town, maintains the highest price in the capital of the Turia.

However, Valencia remains at relatively low levels in terms of price per square meter, compared to the large Spanish capitals. With an average of 1,765 euros, it is notably below Madrid, Barcelona or San Sebastián, which exceed 3,500 euros per square meter.

As for rent, Valencia has risen 18.1% compared to September of last year, according to data estimated by the idealista real estate portal. The price per square meter thus stands at 10.5 euros.

‹ ›
Keywords:
EconomíaInmobiliario
Your comment has been forwarded to the administrator for approval.×
Warning! Will constitute a criminal offense, illegal, threatening, offensive, insulting and swearing, derogatory, defamatory, vulgar, pornographic, indecent, personality rights, damaging or similar nature in the nature of all kinds of financial content, legal, criminal and administrative responsibility for the content of the sender member / members are belong.
Related News