Ukraine: Maria Primachenko, the great lady of naive art rediscovers herself in Venice

The invasion of Ukraine by Russia - tragically - propelled the name of Maria Primachenko (1908-1997) on the Web, when the work of this great lady of naive art, which is a national emblem in his native country, was partially destroyed last February when the Ivankiv museum, north-west of kyiv, burned down following a bombardment by Russian forces. 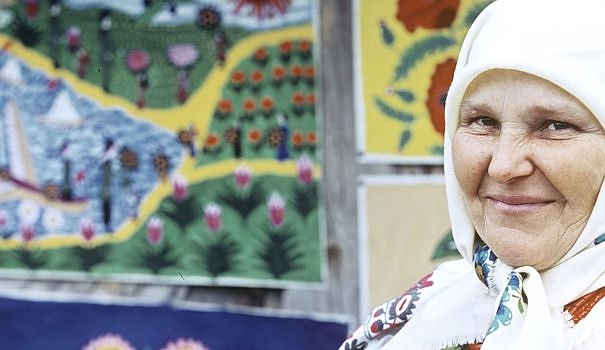 The invasion of Ukraine by Russia - tragically - propelled the name of Maria Primachenko (1908-1997) on the Web, when the work of this great lady of naive art, which is a national emblem in his native country, was partially destroyed last February when the Ivankiv museum, north-west of kyiv, burned down following a bombardment by Russian forces. Result: 25 emblematic compositions gone up in smoke, and a tidal wave of indignant emotion among curators and art lovers around the world.

Today, three major paintings by Maria Primachenko are shown at the 59th Venice Biennale (until November 20) which the general curator, Cecilia Alemani, has chosen to combine with women and over which hangs the shadow of war in Ukraine. At the Giardini, a "Piazza Ukraina" has been installed to offer "a platform of solidarity to the Ukrainian people", while in the central pavilion sits a Scarecrow composed by Primachenko in 1967.

Further on, in the main nave of the Scuola Grande della Misericordia, the Pintchouk Foundation, an international showcase for contemporary art in Ukraine, is showing, alongside the works of its young laureates, two colorful canvases from 1977, Boxers and Antique Wolf, among some treasures that survived the ongoing conflict.

Two paintings from 1977, "Boxers" and "Antique Wolf", are exhibited by the Pintchouk Foundation at the Scuola Grande della Misericordia.

This year, against a backdrop of geopolitics, the Biennale is an opportunity to recall the incredible journey of the woman who fascinated Picasso in her time. Daughter of peasants, Maria Primachenko was born in the small village of Boltonia, about thirty kilometers from Chernobyl. Much later, shortly before the nuclear disaster of 1986, she will appear on a canvas of the reactor after the explosion, an image born of a premonitory dream. Self-taught, suffering from poliomyelitis, the artist rarely leaves his native region, populating his paintings with animal, floral or geometric motifs from his imagination but also from the reality of what surrounds him. Her illness imposing long periods of immobility on her, she spends her days creating embroidery and painting frescoes or ceramics imbued with local popular traditions.

It was during the 1930s that Maria met with dazzling success. First in his country, during the first exhibition of naïve art in 1936, then in Europe, the following year, when the public discovered his work at the Soviet pavilion at the Universal Exhibition in Paris, which awarded him a medal. Golden. Picasso and Chagall then acclaim this "art of the marvelous" which links the universe of ancestral folklore to the upheavals of History in motion, the author of Guernica bowing to "the talent of this brilliant Ukrainian". Subsequently, Maria's fame crossed the Atlantic, to Canada, which celebrated the chromatic richness of her phantasmagorical creatures that she humanized through her gaze - eyes framed by long eyelashes or adorned with expressive eyebrows.

The Second World War and the interminable Cold War that followed gradually made Maria Primachenko fall into oblivion outside the borders of Ukraine. Except at home, where she remained a star, her country even paying her a posthumous tribute by publishing stamps bearing the image of her paintings on the centenary of her birth. Twenty-five years after the death of this prolific artist who left nearly 700 compositions, the world is rediscovering a work both accessible by its apparent formal "naivety", and disturbing by its contemporary resonance, like the dazzling flowers or dreamlike birds that Maria Primachenko explicitly presents, from the 1960s, as "messengers of peace".