The newly released husband of the oldest of the Kardashians, drummer Travis Baker, has caused a stir on the networks by showing the interior of his house. 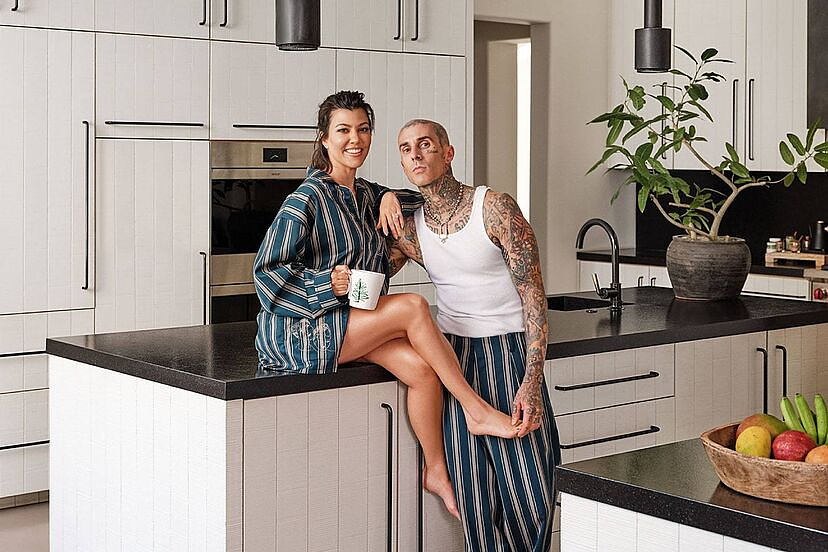 The newly released husband of the oldest of the Kardashians, drummer Travis Baker, has caused a stir on the networks by showing the interior of his house. Her tattoo-studded tough-guy look has nothing to do with the simple, Zen decor of the mansion she shares with her and Kourtney Kardashian's three children.

The tour of the house, explained by Baker himself and where his wife makes a cameo, was published by the American edition of Architectural Digest magazine. In it, the Blink-182 drummer tells what day-to-day is like in each of the rooms of the house that he shares with his children Atiana de la Hoya, 23, Landon, 18, and Alabama, 16.

"I wanted an atmosphere of spiritual calm," Baker says of the mansion's renovation. The rocker bought the mansion in 2007 with his ex-wife, Shanna Moakler, crowned Miss USA in 1995, for 9.5 million dollars (8.9 million euros). when the celebrities had not yet arrived in Calabasas.

Three years ago, the musician decided that he wanted to give it a new look. At the suggestion of his current mother-in-law, Kris Jenner, he hired Cuban-born designer Waldo Fernández, famous for his interventions in Los Angeles mansions, for the renovation.

The result is neutral-colored interiors, with contemporary furniture, modern art pieces, and replete with memorabilia from his music career and his relationship with Kardashian. "I loved the simplicity and Zen quality of her work. We connected immediately," says Barker of her first meeting with the designer.

The surprise of the fans when they saw the interior added reactions in the publication of the video on Instagram. "A pleasant surprise to see the decoration, I love it," said a follower. "Elegant, simple and unpretentious," celebrated another. "It is not at all how I imagined her house would be, she has very good taste," added the next.

The mansion display also drew criticism. Some said that the house no longer seems his, but his wife's, embarked with the entire family clan on the recording of the new reality show produced by the Hulu platform, The Kardashians, in which Baker himself participates.

The renovation took place before he began his relationship with Kourtney Kardashian a year ago, culminating in their wedding last weekend. However, both have been friends and neighbors for more than a decade, and both families already had a fluid relationship, as they explain in the television series.

In fact, it was the Kardashian clan that made the town of Calabasas, located an hour's drive from Los Angeles, fashionable when in 2007 the program Keeping up with the Kardashians began to be broadcast, which made them famous. In April 2022, home prices in the area increased 10.8% compared to the previous year and are selling for a median price of $1.9 million, according to Redfin data.

The rest of the criticism was against the magazine for showing a house that, according to them, is not up to the mansions that usually appear in the prestigious publication. "There is nothing impressive in it," read one of the comments. "I was expecting more from a guy who has tattoos all over his head," said another.

Barker explains in the video that this understated environment is perfect for relaxing when he returns from busy tours. And very different from some of his previous residences. "I've had houses with lots of flashy cars, murals, and bikes hanging from the ceiling," he admits. But for the new married life, where he has joined the household his wife plus his three sons, still children, that she had with Scott Disick, the place "is more suitable" for the moment he is living .

‹ ›
Keywords:
InmobiliariocasasCasas De LujoMercado InmobiliarioEstados Unidos
Your comment has been forwarded to the administrator for approval.×
Warning! Will constitute a criminal offense, illegal, threatening, offensive, insulting and swearing, derogatory, defamatory, vulgar, pornographic, indecent, personality rights, damaging or similar nature in the nature of all kinds of financial content, legal, criminal and administrative responsibility for the content of the sender member / members are belong.
Related News