The truth about the killer Obelix

The conquest of Gaul by Julius Caesar was one of the deadliest wars in antiquity. 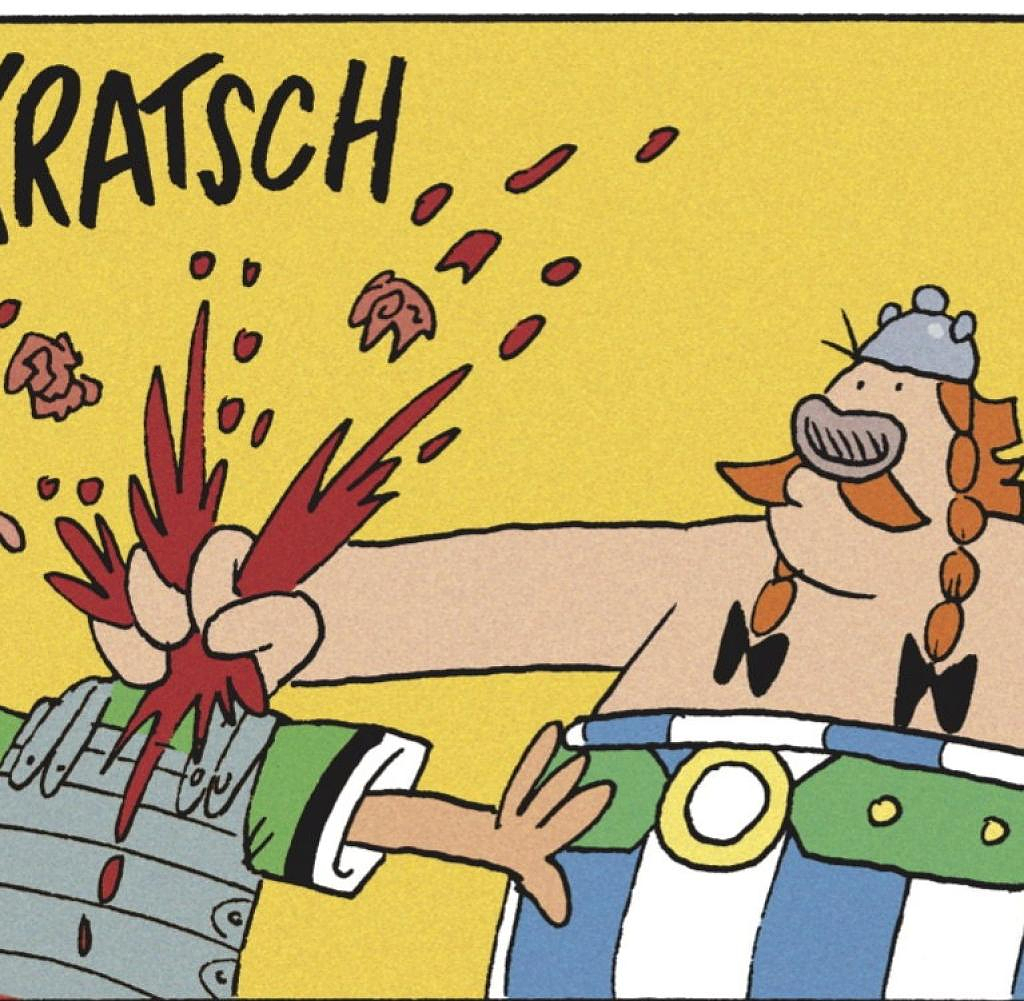 The conquest of Gaul by Julius Caesar was one of the deadliest wars in antiquity. Of the seven million people who previously lived in Gaul, one to two million were killed, enslaved, or starved to death because infrastructure was destroyed by the war. The prices for slaves on the Roman markets are said to have fallen spectacularly as a result of the Gallic Wars.

But eventually every carnage in world history becomes folklore. In 1959, René Goscinny and Albert Uderzo were able to rely on the beneficial effects of forgetting when they made a small Gallic warrior and his fat, super-strong friend the heroes of a comic series that is still successful today. 2000 years later, Caesar's war was regarded as a kind of founding myth of France, because the French had realized that the Romans were just as much their ancestors as the Gauls.

And of course you don't treat your own relatives too brutally, even if they are always fought by Asterix and Obelix in the comics as decadent, megalomaniac and conquerors (all characteristics that have also been said to be the French national character) conquerors. You beat them so they fly out of their sandals - but you don't kill them.

All of a sudden everything is different now.

For the first time, the "Asterix" copyright holders have officially allowed an artist to parody the series by sending the characters on independent, much more violent adventures. The lucky guy is Lewis Trondheim, one of the leaders of the loosely affiliated artist group L'association (like the eponymous independent publisher that Trondheim and others founded in 1990), which has revolutionized the Franco-Belgian comics scene for the past three decades. Trondheim sends its hero "Mr. Rabbit" on a journey into the Gallic past.

It begins with Mr. Hase, waking from his faint, to find himself in Gaul in the year 50 BC. Chr finds again. He wears the iconic black shirt, red pants and short sword, only the winged helmet doesn't fit over the huge rabbit ears at first - but eventually it will. And everyone thinks he's Asterix. The Romans too, who inflicted a heavily bleeding flesh wound on him with a javelin throw in the forest, but who fled immediately when "the big hunk" came to his aid.

The humor in the story "Beim Teutates!" (Verlag Reprodukt, 13 euros) results largely from the fact that Mr. Hase is a modern person, educated in pop culture and shaped by the sensibilities of the present, who has read all the "Asterix" comics . For example, he doesn't really eat meat: "The factory farming, the ozone hole, the water consumption!" Certainly not raw wild boar. Obelix finds this puzzling. He also doesn't understand why Asterix/Rabbit asks "Didn't a fox pee on that too?" when they are eating berries in the forest.

Mr. Hase is constantly shocked because things are more rustic in Gaul than he is used to. But he quickly got used to commenting on all events with "like in the comics" or "it's different in the comics", because nobody understands that anyway. At the latest, when Obelix either cuts off or crushes the Romans' heads, Mr. Hase understands that different laws apply here than in the notebooks of his childhood. Obelix explains to him, well, there's a war going on. Also, it drives him particularly wild when the Romans speak Latin (which they never consistently do here, just like in the comics) then he just has to massacre them.

The story is complicated by the appearance of a man who claims to be the god Teutates. He certifies his divinity by knowing everything about the villagers. Mr. Rabbit remains suspicious, because he also knows (almost) everything and is still not a god. Finally, when his chaotic friend Richard, a cat, travels to the world of Gaul and reveals to him that they are on a mission to save the world, the adventure begins.

What Trondheim does with the gift of artistic freedom is a real joy. He manages to squeeze in an extreme amount of metahumor that only Asterix fans familiar with the work would understand - and yet tell a fairly straight-forward, wacky story that can be enjoyed without reading all of the volumes a hundred times.

The successful experiment should encourage rights holders to allow such parodies more often. There are now a whole lot of homage volumes to "Lucky Luke" by artists like Mawil, Matthieu Bonhomme or Ralf König, which are often better than the official sequels. Why shouldn't that also be conceivable with Asterix?

‹ ›
Keywords:
TexttospeechAsterix Und ObelixTrondheimLewisComicsHeineMatthiasReprodukt VerlagLucky LukeGeschichteKriegGallienJulius CäsarReiseRalf König
Your comment has been forwarded to the administrator for approval.×
Warning! Will constitute a criminal offense, illegal, threatening, offensive, insulting and swearing, derogatory, defamatory, vulgar, pornographic, indecent, personality rights, damaging or similar nature in the nature of all kinds of financial content, legal, criminal and administrative responsibility for the content of the sender member / members are belong.
Related News