The exhibition to see: Nadja, a surrealist heroine with a tragic destiny

At the time, she had an assumed name that she had given herself: Nadja. 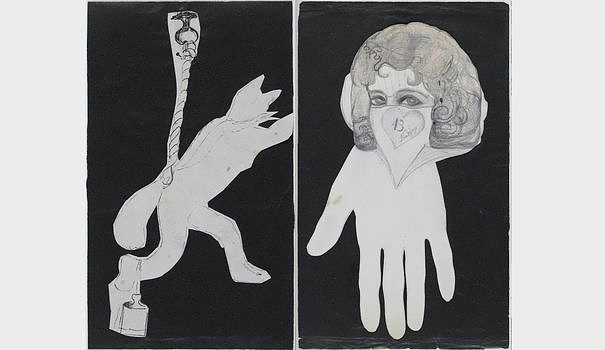 At the time, she had an assumed name that she had given herself: Nadja. In Russian, the beginning of the word hope. The pseudonym also of the American dancer Beatrice Wanger who was performing in Paris at the time. When Nadja met André Breton in the capital, rue Lafayette, on October 4, 1926, she was 24, he was 30. Her real name was Léonie Delcourt, had fled the town in the North where her family was struggling to pursue a career in the performing arts. She left a little girl there, Marthe, to whom she gave the first name of her elder sister who died prematurely, a child she owes to an officer of the English troops who liberated Saint-André-lez-Lille in 1918.

Rue Lafayette, the poet, who had committed Le Manifeste du surréalisme two years earlier, was seduced by the port of the head and the "fern eyes" of the passer-by. "He was probably the first man to recognize his intelligence", notes the Dutch Hester Albach who devoted a biography to Léonie-Nadja in 2009, at Actes Sud. Their direct relationship - half romantic, half "surreal" - only lasted nine days. The time for Breton to taste the admiration that this atypical young woman has for him. He listens to the story of his life, inspires him with phantasmagorical drawings that will populate Nadja, a story he publishes in 1928, and, incidentally, the bed in his bed.

Léonie is in love, André just fascinated, and soon frightened by the body and soul abandonment she shows him. He moves away. She clings, by correspondence. "So, despite everything, I am a part of you. It's more than love," she wrote in her last letter to him in February 1927. Breton did not reply. Gloomy Léonie, soon to be institutionalized by the psychiatrist on duty, sovereign, after a delirious crisis on the public highway. From the Sainte-Geneviève-des-Bois asylum to that of Bailleul, in her region of origin where her parents went out of their way to transfer her, she never left and died on January 20, 1941, without food or care, following the German occupation of the place.

Today, the Rouen Fine Arts Museum is devoting an exhibition to her as part of its cycle dedicated to "heroines". Beyond the figure of Nadja, it is the work bearing her name that is deciphered there. There are of course Léonie's drawings, ten in number out of the 48 images present in the original edition, which she produced during their short affair and about which André questions her tirelessly: "The rectangular masks which she cannot nothing to say", "The flower of lovers", "The dream of the cat"... In the book, Breton introduces Léonie's compositions with these words: "Nadja invented a marvelous flower for me. lunch in the country that this flower appeared to her and I saw her with great incompetence trying to reproduce it."

But other characters from the story invite themselves into the exhibition: Man Ray immortalizing Paul Eluard, Robert Desnos and Benjamin Péret; images of Parisian places; a few reproductions of works, including L'Enigme de la fatalité by Chirico or Idylle, the Ripolin painting by Picabia, which the couturier and collector Jacques Doucet donated to the Grenoble museum; and anonymous photos of objects including the famous bronze glove, whose origin is unknown, forever linked to the blue glove worn by the poet Lise Deharme who made Breton fantasize at that time, while Nadja, his lover nine days old, was slowly dying in his psychiatric asylum.