Just like Emperor Augustus used pictures as a means of communication

Five strong men are needed in the Bucerius Kunst Forum to hang up the two huge round marble shields that have just arrived from the National Archaeological Museum in Naples. 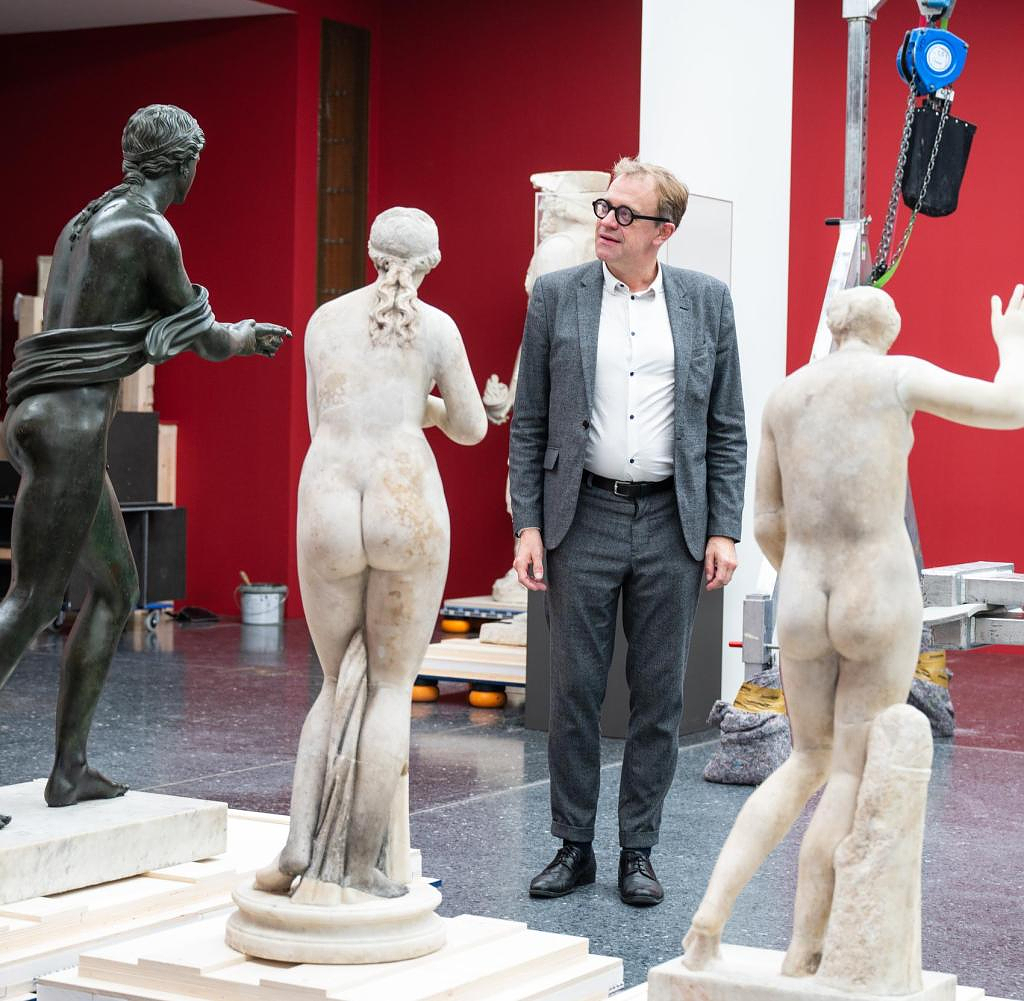 Five strong men are needed in the Bucerius Kunst Forum to hang up the two huge round marble shields that have just arrived from the National Archaeological Museum in Naples. The Italian-German team that is currently setting up the exhibition “The New Images of Augustus – Power and Media in Ancient Rome” on Neuer Wall is fixing the exhibits, each weighing two tons and measuring one and a half meters in diameter, at eye level on the red-painted wall Wall.

Two magistrates dressed in togas, probably a father and son, are depicted on the shields. The monumental objects come from the ancient city of Cumae and have adorned a building there since the first century AD, which was modeled on the Augustus Forum in Rome.

The square, newly built by the first Roman emperor and decorated with numerous sculptures, influenced many buildings in the Roman Empire and is an example of the dawning imperial period. The era of Augustus was characterized by lively building activity - and brought with it an enormous boom in pictures.

The new desire for images manifested itself everywhere: reliefs and statues adorned temples and forums, while mosaics, frescoes and sculptures increasingly found their way into private homes. The exhibition, curated by Andreas Hoffmann, Managing Director of the Bucerius Kunst Forum, and Annette Haug, Head of the Antiquities Collection at the Kunsthalle zu Kiel, examines Augustan visual culture not only as a political but also as a social phenomenon from October 8th to January 15th.

On display are statues, busts, murals, coins and ceramics. The approximately 200 items on loan come from many European museums, such as the Uffizi Gallery in Florence, the Louvre in Paris or the Capitoline and Vatican Museums in Rome.

Augustus (63 BC – 14 AD), born as Octavian, not only marked a turning point as a builder. Adopted by Gaius Julius Caesar and destined to be his heir, Octavian died in 27 BC. Chr. to the princeps, to the "first" in the state. Endowed with the honorific Augustus (the Exalted) by the Senate, the first Roman emperor combined his autocracy with the republican constitution. His reign was characterized by peace (Pax Augusta), stability, prosperity and cultural flowering.

Naturally, images of Augustus in particular were omnipresent in the empire. There were also symbols that were identified with the emperor - these included images of the mythological founding fathers Romulus and Aeneas or the imperial tutelary goddess Victoria. The new ruler used images as a means of communication in a clever and effective manner.

A feature of his era was the generous use of marble as a building material, which was recently quarried directly in Italy. Augustus' Rome was reborn as a city of marble. "You show: Rome is now the center of the world and victorious," says Hoffmann.

The desire for images, which had already developed in the late Republic, thrived on the basis of the new self-image. Portraits of the political leaders were created for the first time in Caesar's time and were distributed as replicas. The members of the First Triumvirate are presented: Pompey had himself portrayed in the style of Alexander the Great, while Crassus appears as a seasoned man of honour. Finally, Caesar was the first to bring his image to the people on coins. A posthumous portrait shows him as a godlike ideal full of goodness.

The marble and coin portraits of Octavian-Augustus also pass through different phases. The image of the general and politician develops from the youthful savior of the state to the energetic victor to the peace-making authority that combines virtues such as dignity, grandeur and piety; Examples of all types, which have often been copied, can be seen.

There were also many pictures of Livia, wife of Augustus and mother of his successor Tiberius. At first she traditionally appeared as the wife of the emperor, but in old age she was idealized as a priestess of the emperor cult. "Livia must have enjoyed great popularity," says Hoffmann.

The series of images that unfolds in the exhibition shows the immense influence of Greek culture. For example, one of the girl statues in the Augustus Forum can be seen, which was modeled on the Erechtheion Koren of the Athenian Acropolis.

With his politics of images, Augustus not only shaped the representative buildings, but also had an effect on the Rome of the common people. He renewed the cult of the Lares Compitales, the guardian spirits of the crossroads, venerated by the people of the neighborhoods. The cult of the Lares was now carried out on altars decorated with pictures together with the cult of the Genius Augusti (protective spirit of the emperor).

A major theme is the pictorial decoration of the private houses, which becomes clear with examples from Pompeii. Hoffmann and Haug put forward the thesis that the privately celebrated desire for pictures was not politically influenced, so that the state picture program was hardly reflected in the home. Neither the wall frescoes nor the sculptures in the residential buildings show the emperor or imperial symbols. "Rather, private enjoyment of life plays a role in the houses," says the curator. Venus, the goddess of love and Bacchus, the god of wine, frolic in the family room.

‹ ›
Keywords:
HamburgRömisches ReichKulturAusstellungenGeschichteMuseen
Your comment has been forwarded to the administrator for approval.×
Warning! Will constitute a criminal offense, illegal, threatening, offensive, insulting and swearing, derogatory, defamatory, vulgar, pornographic, indecent, personality rights, damaging or similar nature in the nature of all kinds of financial content, legal, criminal and administrative responsibility for the content of the sender member / members are belong.
Related News