Despentes, Gaudé, Nothomb, Mabanckou... The essentials of the literary season

Rise in the price of paper, inflationary trend, concerns - and tensions - following the takeover bid launched by Vivendi on Lagardère (Hachette), announcement of the resale of Editis, fragility of independent publishers, drop in turnover in bookstores after the crazy growth of 2021: the literary season is taking place this year in a climate of protean uncertainty. 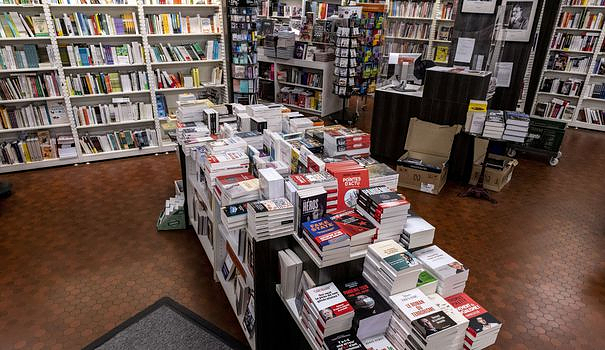 Rise in the price of paper, inflationary trend, concerns - and tensions - following the takeover bid launched by Vivendi on Lagardère (Hachette), announcement of the resale of Editis, fragility of independent publishers, drop in turnover in bookstores after the crazy growth of 2021: the literary season is taking place this year in a climate of protean uncertainty. In this context, and while the question of overproduction is becoming ever more acute, some publishers are putting the brakes on and lightening their programs (slightly). According to data from the professional magazine Livres Hebdo, 345 titles in French literature (including 90 first novels, an interesting increase) and 145 others in foreign literature will be available in bookstores between August and October. That is 490 novels in total. Certainly, it is a lot. But production is down 6% compared to last year. And above all, for the first time in twenty years, it falls below the 500 titles mark. Mazette!

We reassure you right away, this tightened return to school is not synonymous with austerity. Far from there. All the ingredients of an excellent vintage are gathered. An eclectic profusion of headliners, safe bets, a shower of rising stars, eagerly awaited second novels and, of course, great discoveries. Faced with so many appetizing novels and when only a large handful of them can hope to find a place in the sun of the media craze, L'Express helps you find your way with a non-exhaustive overview of the unmissable of the comeback. Hang in there, it's a long road but we guarantee it's worth the detour!

After having launched her own house in March called "The legend editions" - with the objective of "promoting the representation and visibility of queer culture" -, Virginie Despentes is making a particularly awaited return. Five years after the end of the Vernon Subutex trilogy, the favorite of this season signs Cher Connard, a novel of rage and consolation described by its publisher, Grasset, as "Ultra-contemporary dangerous liaisons". Among the headliners, Amélie Nothomb, regular as a Swiss cuckoo clock, composes a tribute to love (Le Livre des Soeurs, Albin Michel), Franck Bouysse orchestrates a tasty suspense (L'Homme Peuplé, Albin Michel) when the he unpredictable Laurent Gaudé delivers a dystopia against the backdrop of a police investigation (Chien 51, Actes Sud). Still at Actes Sud, Valentine Goby offers an initiatory landscape novel (L'Ile haute), Muriel Barbery retraces the consequences of an insane promise (One hour of fervor) while Lola Lafon is unfaithful to the Arles publisher for the time of When you listen to this song (Stock), reflect on a night spent in the Anne Frank House.

In line with the multi-award-winning And always the Forests (2020), Sandrine Collette begins her first literary comeback with We were wolves (Lattès). Yann Queffélec questions Where does love come from (Calmann-Lévy), Olivier Adam continues to cover his tracks while probing the family mechanisms (Dessous les roses, Flammarion) while Alice Zeniter "opens the windows of fiction wide " with a literary essay (A whole half of the world, Flammarion). Alain Mabanckou immerses his readers in a politico-social fable (Le Commerce des Allongés, Seuil), Yasmina Khadra plunges them into Algeria between the wars (Les Vertueux, Mialet-Barrault), Marcus Malte puts their nerves hardship (Who will remember Phily-Jo, Zulma) while Yannick Haenel tells them how it is possible to resist from the inside with the story of an anarchist banker (Le Trésorier-payeur, Gallimard).

As usual and despite a reduction in its programming, Gallimard is lining up a gaggle of prominent authors this fall, including Marie Nimier (Little sister), Christophe Ono-dit-Biot (Finding refuge), Carole Fives (Quelque chose à tell you) and Monica Sabolo (The Clandestine Life). The same profusion at Grasset, where Virginie Despentes rubbed shoulders with Léonora Miano with Stardust, her first novel written twenty years ago, Yann Moix's Paris, the last opus of her tetralogy "In the land of immobile childhood", the poetic Un chien à my table by Claudie Hunzinger or the suggestive Performance by Simon Liberati. And the list of sure values ​​goes on and on, notably with Gaëlle Josse (Fathers' Night, Black on White), Olivia Rosenthal (A Monkey at My Window, Verticales), Anne Serre (Our dear old lady author, Mercure de France), Gaelle Obiegly (Totally unknown, Bourgois), Lionel Duroy (Disappear, Mialet Barrault), Brigitte Giraud (Live fast, Flammarion), Grégoire Bouillier (The heart does not yield, Flammarion) or even Jean Rolin (La Traversée de Bondoufle , POL). The publisher will also publish later in September the shocking V13 by Emmanuel Carrère, a document bringing together all of the writer's chronicles, reread and augmented, during the trial of the November 13 attacks. Also noteworthy in September, on the sidelines but so close to the start of the school year, are the releases of two heavyweights; Tatiana de Rosnay (We will be better tomorrow, Robert Laffont) and Guillaume Musso (Angélique, Calmann-Lévy).

Did you think you were done? Nay! Impossible to miss the rising stars of French letters, some of whom are already used to reaping great prizes. Thus the sparkling Miguel Bonnefoy, Goncourt 2015 of the first novel (Le Voyage d'Octavio), including Legacy (2020) which won the 2021 booksellers' prize and which this time sets out to restore the destiny of a forgotten genius , The Inventor (Rivages) of solar energy. But also the talented Pierre Ducrozet, author in particular of L'Invention des corps (Prix de Flore 2017) signing with Variations de Paul (Actes Sud) his most personal novel, just like Emma Becker who we find again three years after the subversive La House (Flammarion) with an autofiction where she questions Misconduct (Albin Michel).

Emmanuel Ruben, whose Saber (2020) won the Deux-Magots 2021 prize, reinvents his country of ancestors with Les Méditerranéennes (Stock), Sébastien Spitzer goes from La Fièvre (2020) to La Revanche des orages (Albin Michel) , Kaouther Adimi, resident at the Villa Medici, returns to Au vent mal (Seuil), three years after Les Petits de Septembre, Berengère Cournut takes us on a new journey with Zizi Cabane (Le Tripode), Emmanuelle Richard dissects the ambivalence of desire with of Men (L'Olivier), when, crowned with the grand prize of the French Academy, Camille Pascal revives the breathless time of the Regency with his third novel, The air was all on fire (Robert Laffont).

After winning the Goncourt for the first novel with Que sur toi lamente le tigre (Elyzad, 2020), Emilienne Malfatto plunges into the nightmares of a muscular interrogation specialist (Le colonel ne dormet pas, Sous-Sol). Like her, many ex-primo star novelists pass the difficult course of the second novel. Four years after It tells Sarah (Minuit), Pauline Delabroy-Allard, is back in white with Who knows (Gallimard). David Lopez, the big revelation of the 2017 back-to-school season (Fief) signs Vivance (Seuil). Victoria Mas, whose Le Bal des Folles became an international success, tells Un miracle (Albin Michel). Another feather revealed during the 2019 literary season, Victor Jestin continues on the momentum of the splendid La Chaleur and signs L'homme qui danse (Flammarion). Prix ​​des 5 continents, for All your scattered children, Beata Umubyeyi-Mairesse explores transmission and exile with Consolée (Autrement). Dany Héricourt, acclaimed for La Cuillère, once again chisels a text as tender as it is offbeat with Ada and Graff (Liana Lévi), the editor Maud Simonnot exercises her poetry in L'Heure des Oiseaux (L'Observatoire) when Annie Lulu takes you on a journey to the heart of human fragility with Peine des faunes (Julliard). Without forgetting the critic and journalist Olivia de Lamberterie. After a first literary and personal essay, With all my sympathies, crowned by the Renaudot essay 2018, she signs the tender How do people do (Stock).

Finally, a quick look at the unmissable foreign back-to-school, and, we promise, we'll set you free. There are a lot of people on the program! In particular an unpublished short story by the great Toni Morrison (Recitative, Bourgois), the great return of Russell Banks (Oh, Canada, Actes Sud), the unclassifiable Pulitzer Prize 2015, Anthony Doerr (The City of Clouds and Birds, Albin Michel ), the locomotive Jonathan Franzen and his art of dissecting American families (Crossroads, L'Olivier), Anna Hope's fourth novel (Le Rocher blanc, Le noise du monde) or the worldwide phenomenon Sally Rooney back with a new generational novel (Where are you admirable world?, L'Olivier).

We will also have a good overview of the diversity of the great literary voices that reach us from the four corners of the planet. From Colombia with Juan Gabriel Vasquez, (A retrospective, Seuil). From the UK with Julian Barnes (Elizabeth Finch, Mercure de France). From Israel with that of Amos Oz (The story begins, Gallimard). From Mozambique, Mia Couto (The Cartographer of Absences, Métailié). From Ireland, Colm Tóibín (The Magician, Grasset). From Russia thanks to Maria Stepanova (In Memory of Memory, Stock). Or even the United States with the talented Tiffany MacDaniel (Summer where everything melted, Gallmeister). Appointment from August 18 in the Bookstore pages of L'Express to discover our favorites (or claws) of this new season.