To the brake of the restoration in all the Eixample, now adds the distribution in Ciutat Vella. 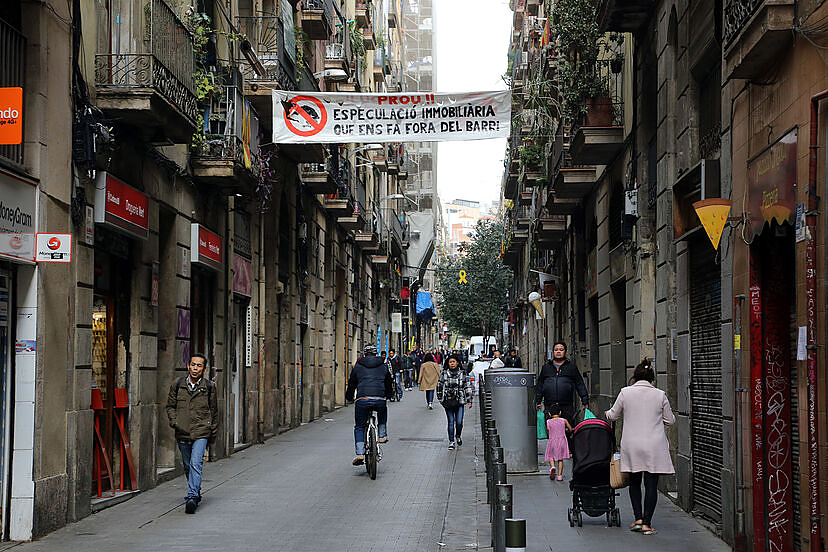 To the brake of the restoration in all the Eixample, now adds the distribution in Ciutat Vella. License suspensions affect urban transformations but also economic activities: commerce, 'ghost kitchens', souvenir shops and tourist accommodation.

The temporary suspension of licenses for supermarkets, convenience stores, bakeries and exchange houses in the Barcelona district of Ciutat Vella, agreed last May, is the latest moratorium launched by the government team led by the mayor, Ada Colau . Since she took office in June 2015, she has resorted to this formula 24 times, which business groups and opposition parties question in some cases.

Municipal sources make it clear that the moratoriums "are not an end in themselves" but rather an instrument regulated by law that allows urban development plans or special plans that affect activities that are regulated to be drawn up "with guarantees". The main objectives are to combat gentrification -concentration of the same activity in a very specific area of ​​the city-, improve coexistence, preserve local commerce and protect heritage, emphasizes the City Council.

Some moratoriums have affected the entire city, such as the ban on hotels in the most central areas or the ban on renting rooms to tourists in private homes.

The opening of new gas stations on the basic road network, the Port and industrial estates has also been limited, and new promotions and large renovations must reserve 30% for public housing, a measure that has paralyzed this type of construction, says the sector. real estate.

At the end of 2018, the City Council presented the new regulation for souvenir shops, which limits the space reserved for this type of item in new shops.

A consequence of Covid-19 was the rise of the so-called ghost kitchens that work for home delivery platforms. In the face of neighborhood complaints, a moratorium was promoted and then an urban plan to limit their proliferation in the urban fabric, but in mid-May, the Catalan Competition Authority (Acco) saw it as disproportionate that the restrictions are superior to industrial kitchens. He also lamented the absence of an economic report to support the measure.

One rule that the courts have challenged is the Low Emissions Zone (ZBE) that aims to improve air quality, and that introduced moratoriums on some types of vehicles.

Also in force in the previous mandate was a suspension of licenses for restaurants, entertainment venues and businesses related to tourism in Ciutat Vella. In the Eixample, restaurants were first banned in the streets that will be pedestrianized -such as the surroundings of Girona street, to which Enric Granados is added, which has a high density of restaurants-. Now, the limits extend to the entire district and also affect travel agencies and gyms, among other businesses. Limiting the restoration will imply an increase in the price of the premises that have a license, something that already happened in its day with the hotels, assure real estate sources.

There have also been moratoriums for commerce, leisure and tourism in Paral·lel and Gran de Sant Andreu street and now the council has given itself a year to adapt the municipal nurseries to the progress of the school calendar.

Other affected areas have been the 22 @ -to expand the residential land-, Vallcarca, the restaurants with disco of the Front Marítim, the plots of the Eixample, the old houses-factory of Ciutat Vella -like Can Seixanta-, the old nucleus of Horta -to protect historic buildings-, the surroundings of the Sant Antoni market -after its refurbishment-, Gràcia -urban planning licenses- and the Sants-Hostafrancs triangle.

Since April, demolition, construction and major rehabilitation licenses have been suspended to draw up a new plan in two neighborhoods of the Sant Martí district: El Clot and Camp de l'Arpa.

‹ ›
Keywords:
CatalunyaCataluñaInmobiliarioTurismoInmobiliario Y Construcción
Your comment has been forwarded to the administrator for approval.×
Warning! Will constitute a criminal offense, illegal, threatening, offensive, insulting and swearing, derogatory, defamatory, vulgar, pornographic, indecent, personality rights, damaging or similar nature in the nature of all kinds of financial content, legal, criminal and administrative responsibility for the content of the sender member / members are belong.
Related News