Post a Comment Print Share on Facebook
Famagusta 27
DOLLAR 16,78
EURO 17,50
GOLD 976,05
BIST 2.443,77
Ignion negotiates a round of 8 million and grows in antennas for IoT
easyJet and Norwegian, the most backward airlines in Barcelona-El Prat
Natura Bissé buys land in Cerdanyola to expand its headquarters
Telefónica will issue sustainable bonds in Brazil for almost 640 million
Feijóo: "There is only one PP model" that unites Ayuso, Moreno...
A court in Seville opens the liquidation phase of Abengoa's parent...
Pamesa for its cogeneration plants
Medical congresses return with force in Barcelona after the pandemic
Carolina Roca replaces Juan Antonio Gómez-Pintado at the head of Asprima
Those affected by the closure of the Mary Ward school will go to court

The writer Albert Memmi, a thinker of the jews, is dead at 99 years of age

The writer and sociologist Albert Memmi, the great French writer of jewish origin, tunisian, known especially for his novels the humanists in which The statue o 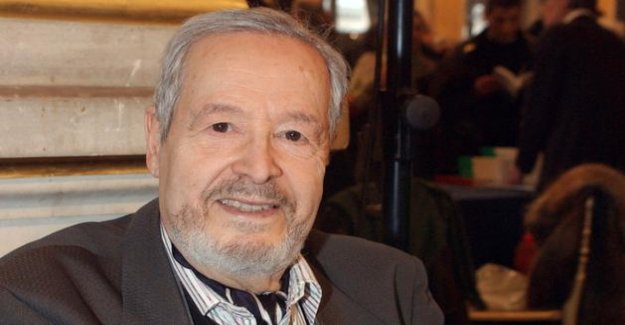 The writer and sociologist Albert Memmi, the great French writer of jewish origin, tunisian, known especially for his novels the humanists in which The statue of salt, and his work on the "jewishness", the colonisation and / or racism, passed away on Friday, may 22, in Paris, at the age of 99 years.

"He died extremely peacefully, in the night from Thursday to Friday," said AFP Guy Dugas, professor emeritus at the university of Montpellier-3, which collaborated with the "writer of the tear" for several decades and had published several books on his life and work, including fragments from his diary.

to Find its place, between France and the Maghreb

He was born in 1920 in Tunisia colonial in a family of jewish Arabic-speaking very modest. The second child of a family of thirteen, he attended a boy, the rabbinic school and the primary school of the Alliance israelite, where he learned French. Brilliant pupil, he receives a scholarship which enables him to integrate the lycée français de Tunis.

read also : Alaa El Aswany, "persecuted in Egypt for his writings": "My only crime is to be a writer,"

During the second world war, just after the allied landings in Algeria in 1943, the Germans invade Tunisia, and it is sent to a camp of forced labour. At the end of hostilities, he went to Algiers to study philosophy, studies which he pursued at the Sorbonne in Paris. He married a French, and moved with her to Tunis, where he directs a laboratory of psycho-sociology, teaches philosophy and directs the culture section of the weekly The Action (the future of Young Africa).

But after the independence of Tunisia in 1956, and although he supported the movement for the emancipation of his country, Memmi no longer find his place in this new State become a muslim. He went then to Paris, where he became professor of social psychiatry at the École pratique des Hautes Études and attaché de recherches at CNRS.

read also : Taguieff (2/2) : "The hatred of Jews, hatred of France and hatred of the West intersect"

There, who is torn between his different cultures, it will not totally his place, him, the poor child, the Maghreb despised. He describes this "in-between" painful in a passage of The statue of salt" as it passes the aggregation in philosophy, his belly crying out for food and he feels uncomfortable, powerless, excluded, among all the sons of the middle class haves who discuss in a tone of pedantic of abstract questions... It includes so that it will be "at home", but never "one of them".

Building bridges between the East and the West

His talent had been recognized early on by Albert Camus and Jean-Paul Sartre, who had prefaced his first works. The Statue of salt (novel, 1953) where he marveled at all with having multiple identities, in the image of its main character, Alexander Mordekhaï Benillouche.

It enjoys international recognition when he published his essay " Portrait of the colonized in 1957, following the independence of Tunisia, where he expressed the interdependence between the colonizer and the colonized. A book, which Nobel laureate Nadine Gordimer had the preface to the English translation, and of which Leopold Sedar Senghor said he was "excited". "A document to which the historians of colonization will have to refer to", predicted the first president of senegal.

read also : War of Algeria : the test of John Sévillia read by the historian Pierre Vermeren

But France is in the midst of the Algerian war, and it encounters serious difficulties with the government, which accuses him of his involvement in the "colonized" and denied French citizenship. He may not get it until 1973 with the help of Edgar Pisani, to him also was born in Tunis.

from the publisher Maspéro, he directs the collection Area of maghreb. Memmi, will also be issued from 1965 is an Anthology of literatures in the maghreb countries. Albert Memmi had never ceased to seek to build bridges between the East and the West, Europe and the Maghreb, and he has contributed by his writings to develop the humanist thought, including its testing around the "jewishness" -- a concept he had coined in the 1970s --, colonialism and racism.

He also founded the concept of"hétérophobie" that he develops in his book racism as "the denial of others in the name of any difference". It also publishes very many tests: Portrait of a Jew, The liberation of the Jew, The man dominated, Jews and arabs, The dependence.

More recently, Albert Memmi had not shared the enthusiasm of many of his contemporaries on the emergence of the "arab spring" in 2011. "If the arab-muslims do not want secularism, and the problem is never addressed, this will not be serious (...) and if we don't attack corruption, this will be "chatting", he said in a television interview, mocking "the species of delusion that has taken hold of the intellectuals and journalists".

The ambassador of France in Tunisia, Olivier Poivre d'arvor, also announced Sunday the news of his death on his account Facebook. "He is gone away from Tunis, where he was born (...). Short of that Tunisia, which has both shaped and has hatched a unique, beautiful, powerful, complex, and sometimes misunderstood, as the tearing away from the native land and the mark of his jewishness are strong," he praised on the social network.

"It is a great intellectual awareness, an anti-colonalisaliste at the same time knows very well that in a Tunisia independent it will no longer have his place," said the ambassador, joined by AFP. For him, "he is a great writer in North Africa, considered by Sartre and Camus as a great writer of maghreb. But the North does not recognize this status, see it as a French writer "of jewish origin", and it is full of misunderstandings and tears that produce this apprere interesting", which marked the Twentieth century.

The editorial team conseilleArmand Abécassis: Who was Jesus to the jews?Jeremy Corbyn, the anti-semite that we don't want to see"We need to adapt to this desire of the readers. Many want to get away from the news,"SujetsAlbert MemmiTunisieDisparitionécrivain1 commentairegrouhlle 25/05/2020 13:41

Memmi has justified the decline of community in acknowledging the settlement, while it is intrinsic to the islamic ideology that organizes politically a hierarchical society. a
And forget that these colonized peoples were also the colonizers.