The secrets of the manuscripts of the Dead sea gradually revealed

Some of the Dead sea scrolls, a collection of texts millennia, including the oldest biblical text in Hebrew, does not come from the desert where they had been f 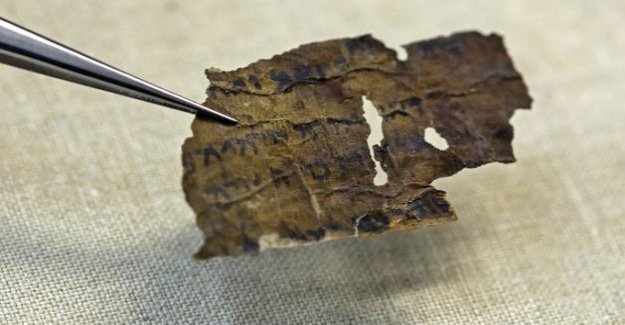 Some of the Dead sea scrolls, a collection of texts millennia, including the oldest biblical text in Hebrew, does not come from the desert where they had been found, concludes a study published Tuesday on the DNA fragments of these scrolls.

read also : The hunters of Bibles in search of the next manuscript of the Dead sea

The 900 manuscripts recovered between 1947 and 1956 in the caves of Qumran, at the foot of the Dead sea, in the west bank, are considered to be one of the most important archaeological discoveries of all time, because they include religious texts in Hebrew, aramaic and Greek, as well as the oldest version of the Old Testament known. The oldest documents date back to the Third century before Jesus-Christ, and the most recent, was written in the year 70, at the time of the destruction of the second jewish Temple by the roman legions.

many experts believe that the Dead sea scrolls were written by the Essenes, a jewish sect dissident who had retreated into the Judean desert to the caves at Qumran. Others believe, however, that a party has been hidden by the jews who wanted to protect them from the Romans. To try to see more clearly and to throw a light science on a theological debate, israeli researchers studied the DNA fragments of these manuscripts. "We have discovered by analyzing fragments of scrolls that some of the texts have been written on cow hides and sheep whereas previously we believed that all were written on the skins of the goats", explains to the AFP Pnina Shor, a researcher at the Authority, israeli antiquities, is leading the project responsible for the study of these manuscripts.

Pnina Shor, a researcher at the Authority on israeli antiquities.

"This proves that these manuscripts do not come from the desert where they were found," says the scientist. "But where do they come from exactly and by whom were they written? These questions remain whole but the study of DNA, carried out during seven years on 13 texts by a team from the university of Tel-Aviv, opens the way to new discoveries," says Mrs. Shor. "We will be able to finally find the answer to the essential question of the identity of the authors of these manuscripts and these first results will have an effect on the study of the life of the jews at the time of the Second Temple," she adds.

The headache of reconstitution

These archaeological research, remain a sensitive issue in Israel and in the palestinian Territories, where the results of work are sometimes used by associations or political parties to assert their claims on the places of memory claimed by both the Palestinians and the Israelis as the Temple Mount, be the most sacred place of judaism, and named the Esplanade of the Mosques by the muslims. Among the discoveries of the team of Ms. Shor include extracts from the biblical book of Jeremiah (a prophet who lived in the sixth century before J-C), and of which many fragments had been considered by the researchers as coming from the same manuscript.

"We see differences both in the content and in the style of calligraphy but also in the animal skin used for the parchment, which proves they are of different origin," says Beatriz Riestra, who participated in this study. In total, approximately 25,000 fragments of scrolls have been discovered over the years in the wilderness of Judea, and the research on these texts is an unrelenting for 60 years. Gold "by characterizing the genetic relationships between different fragments of the scrolls, the researchers were able to discern important historical relationship," says the professor Oded Rechavi of Tel Aviv University.

We see differences both in the content and in the style of calligraphy but also in the animal skin used for the parchment, which proves they are of different origin.

"It's like a puzzle. There are many fragments of scrolls that we don't know how to connect and if we put all of the bad parts, this can significantly change the interpretation," he says. And for the time the puzzle is still puzzle. "The research is only in its infancy but it is already showing results," says Mrs. Shor, who recalls that its role is also to conserve the manuscripts, and that this study can only be made on the whole of the fragments existing, for fear of damaging them.

The editorial team conseilleJérusalem : three mysterious coins underground discoveries near the Wall of the LamentationsÀ Jerusalem, an archaeological discovery confirms the claims of the BibleÉtats united States : the Dead sea scrolls preserved in the museum of the Bible were contrefaçonsSujetsCisjordanieManuscrits of the sea MorteIsraëlAucun comment