The philharmonic orchestra of Zagreb déconfine in... a zoo

Bizet, and Mozart at the zoo. After several weeks of confinement, the philharmonic orchestra of Zagreb took over the service. It is in the middle of the park th 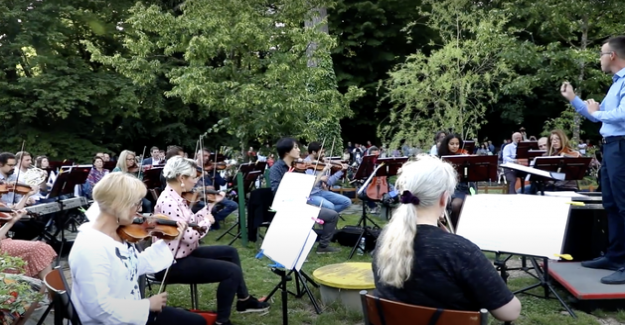 Bizet, and Mozart at the zoo. After several weeks of confinement, the philharmonic orchestra of Zagreb took over the service. It is in the middle of the park the zoo in the Croatian capital as violins, oboes and cellos rang out again after two and a half months of silence.

read also : Croatia : an earthquake strikes in Zagreb, a death

"The concert is open to the sky bring a certain symbolism. They bring the light at the end of the tunnel, and allow us to give a new breath to the item We are particularly pleased to be here, that the zoo of Zagreb celebrates soon his 95th birthday, and the orchestra will celebrate its 150th anniversary in the fall," said the director of the Orchestra Mirko Bloch, reports Radio Classic .

Tchaikovsky to the Beatles

For this particular event, the philharmonic orchestra has chosen a repertoire that is eclectic. The first part of the concert was dedicated to the classic, with the quintessential Carmen of Georges Bizet, the Little night music of Mozart or the Waltz of the flowers by Tchaikovsky. After which, Yesterday by the Beatles, Imagine by John Lennon and titles to Simon & Garfunkel came to modernize the program. Songs in honour of the city of Zagreb have also been played.

at the End of march, a major earthquake of magnitude of 5.3 struck the Croatian capital, leading to one death and significant property damage. A double penalty with the outbreak of Covid-19 that this first concert of the philharmonic has eased somewhat, giving a little balm to the hearts of the inhabitants.