The Basins of lights of Bordeaux miroiteront on June 10,

Of water, of art, of the concrete, and the genius of Klimt... The former submarine base of Bordeaux, will soon be on the 10th June, the case of the Basins of li 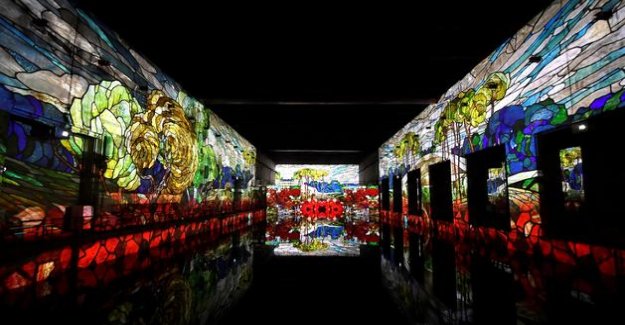 Of water, of art, of the concrete, and the genius of Klimt... The former submarine base of Bordeaux, will soon be on the 10th June, the case of the Basins of lights, an authentic "artistic challenge", according to the designer, Augustin de Cointet, the director-general of Culturespaces, which has created this new exhibition space.

During a visit reserved for the press, he revealed how was born this artistic project in Bordeaux: "When we saw the place for the first time, we had a flash. Gigantism has not made us afraid, the difficulty of the project has motivated us: the concrete, the gigantism, the water, the reflections..."

read also : Klimt in a kit, and toc

This space, monumental scale, consists of four basins parallel to 110 m long and 22 m wide, with a ceiling of 12 m, to cross by bridges on the water to help promote the movement at the heart of an immersive experience where the digital work is a soundtrack slip on the walls and reflected on the water.
The place offers 3,000 m2 of ambulation and 12,000 m2 of projection, with 90 video projectors, 80 speakers and 100 km of optical fiber.

Augustin de Cointet returned to his initial vision of the Pools of Light: "All the technical problems due to the moisture or the gigantism should really go after, we didn't want to do something technologically perfect but had no soul. He had to stay facing this building, to its history, strong and hard, and getting to dress up something that is going to project it towards a future more laughing."

600.000 m3 of reinforced concrete, sunk by the nazi occupiers

For the historian of art and architecture, Mathieu Marsan, Bordeaux "has long turned its back" to the submarine base and its 600.000 m3 of reinforced concrete, completed in 1943 by the nazi occupiers. After the Second world War, it was not economically feasible and technically very dangerous" to destroy it.

The historian was also required to point out: "It is only at the end of the Twentieth century that we will be able to discover the base, with spaces related to the craft, and contemporary art. In the base, one is in the dark, confronted with the works. It is sensitive to art or not, there is necessarily a feeling that is going to create."

With a two-month delay due to the health crisis, the digital projections that will be able to admire the first visitors, limited in number, and hidden, will be dedicated to austrian painter Gustav Klimt, author of the famous Kiss, and the German Paul Klee, in a short format and airs from The magic Flute by Mozart.

With the Basins of Lights of Bordeaux, Culturespaces which driver that is already The Workshop of the lights in Paris and the Carrières de lumières in Baux-de-Provence, and which here has invested 14 million euros, has created "the largest centre of digital art in the world" according to its designer, Augustin de Cointet.