After Paul Muni in Scarface by Howard Hawks (1932), after Neville Brand in the tv series of the 60's, after Robert de Niro in "The Untouchables" by Brian de 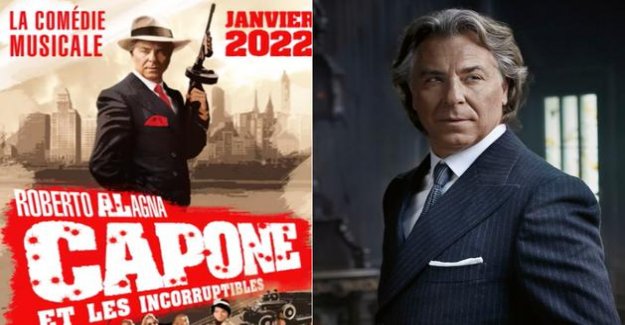 After Paul Muni in Scarface by Howard Hawks (1932), after Neville Brand in the tv series of the 60's, after Robert de Niro in "The Untouchables" by Brian de Palma (1987), it will be the turn of the tenor French of sicilian origin, Roberto Alagna, to bring the gash of a terrible mafioso of Chicago, Alfonso Capone (1889 - 1947), the most infamous mobsters of la Cosa Nostra.

read also : Quiz : What do you know of the legendary gangster Al Capone ?

By 2022, a musical comedy entitled Capone and the Untouchables, written and composed by Jean-Felix Lalanne, the little brother Francis, and directed by Philippe Hersen (Philip and the Chocolate factory) to come back on the terrible criminal enterprise of one of the most cruel godfathers of the mafia, an Italian-american. The one that was nicknamed Scarface, the scarred, will end his days in prison, after having been relentlessly pursued by Eliot Ness and his famous police incorruptible.

read also : Billy Drago, actor, the Incorruptible, the eternal villain of the film, is death

On his account Facebook, as a teaser, on the music of the famous tv series The Untouchables with Robert Stack in the role of Eliot Ness, Philippe Hersen, has published a slide on which one recognizes, Roberto Alagna, decked out in a striped suit, a Borsalino, and a submachine-gun Thompson, the deadly sulfateuse gangsters of Chicago and New Jersey.

A comment that explains the genesis of this new musical comedy, accompanied by this photo of a poster: "Roberto was the perfect choice, its Italian origins, of course, but also because Capone loved the opera. It is a friend for a long time and we try always to work together, that I can write to him. We did some things but that are not outputs, " continues the author and composer. With the period of confinement, he was available, he read it and loved it. "

Our confreres of Paris, which interviewed Jean-Félix Lalanne have been able to learn a little more about this new fiction on the criminal life of Al Capone. This last one has taken some liberties with the historical truth has delivered some clues about the scenario of his book: "We are in an impossible love in Romeo and Juliet, this is no longer the Capulet and the Montaigu, but the cops and the thugs. The orchestration will be a very big bang, with a color musical of the era, some standards, but also compositions based on sounds more modern that will accompany moments of choreographed. But there will be no anachronism in music."

It only remains to Jean-Félix Lalanne and Philippe Hersen to find a great male voice that is able to compete with that of Roberto Alagna to portray Eliot Ness. Because we know, at the end of the story of this bandit, even fictionalized, it is the cop who will be because of the rogue...

The credits of the cult tv series The Untouchables Robert Stack