Mode or ecology, masks, anti-virus in skin of python and iguana

A craftsman of Florida has embarked in the manufacture of protective masks in skin of python and iguana, two exotic reptiles which abound in this state of the s 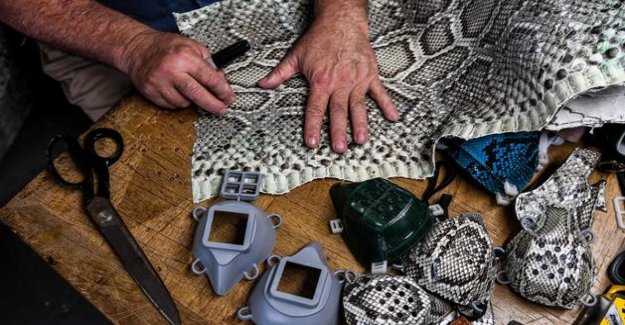 A craftsman of Florida has embarked in the manufacture of protective masks in skin of python and iguana, two exotic reptiles which abound in this state of the south-eastern United States, threatening the local ecosystem. "I transformed an object a vital fashion accessory," says Brian Wood in his workshop in Dania Beach, 40 miles north of Miami.

read also : How the mouse of our ancestors has created the cat we know today

man of 63 years of age, who manufactures all kinds of objects made of reptile skin, has decided to ride the new mode: the masks of protection custom. "It is basic, but it works rather well. They fit well and you can put a filter," says Brian Wood, showing the ventilation holes on their masks reptilians.

The huntress of snakes Amy Siewe steals a python from his skin. CHANDAN KHANNA / AFP

His creations are available in several colors and sold for $ 90 on his page Facebook, All American Gator Products. The slayer of serpents Amy Siewe provides Brian Wood's the massive pythons as they rob in the courtyard of his house, of a coup sec.

"The burmese python is an invasive species in Florida. They don't come from here, but of South-East Asia, and they wreak havoc in the Everglades," says Amy Siewe, 43 years old, in reference to the wet zone that occupies a good part of south Florida. The pythons were introduced into the region probably as pets at the end of the last century. Once released into the Everglades, they were quickly reproduced, with no predator to hunt them.

The Agency of fisheries and wildlife Florida (FWC) encourages the inhabitants, rewards the key to capturing these snakes constrictor that destroy the ecosystem. The iguanas devastate the local flora. Last year, the FWC has called on the citizens to kill as soon as possible, all those that they saw, preferably without cruelty. These large lizards are not, therefore, in the scissors of Brian Wood, and their skin may end soon by protect against human coronavirus.