In Vienna, a music festival that takes place in a peep show

With its mirrors, its velvet red, and her light dimmed, the stage on which the viennese artists parade has nothing in common. They occur for a few weeks in a pe 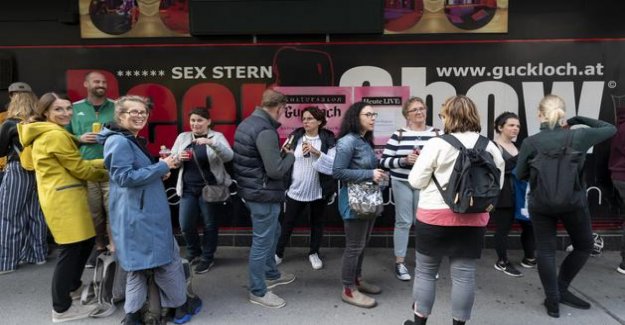 With its mirrors, its velvet red, and her light dimmed, the stage on which the viennese artists parade has nothing in common. They occur for a few weeks in a peep show left vacant by the sex workers because of the sars coronavirus. Private concert halls, and frustrated not to offer their services on the internet, the singers found the contact with the public thanks to the nine individual cabins where you can usually see, after having slipped a few coins into the slot, a pornographic performance through a window.

read also : Strasbourg has tried concerts at the time of the Covid and it is "not tenable"

This festival of the ephemeral has found its audience. Wednesday night, 150 people waited beer in hand to be able to penetrate in small groups in the hotel corridors lined with posters of naked women in lascivious postures. "We were ourselves surprised by the positive response from artists and the public", explains to the AFP Stefan Strahammer, one of the organizers. "At the beginning, the owner of the peep show we do not take seriously, but very soon, he was enthusiastic and lent us free of charge its local" in the centre of Vienna.

in Order to meet health standards, only eighteen people are allowed to distribute in the cabins every quarter of an hour to three or four songs. They give the amount of money they want. "It makes me feel funny to go into a peep show, this is the first time", gliding in the queue, a middle-aged, Annelise Seidl. Her friend Andrea Schuh "is that it's a great idea, very innovative". "I want to be, because at this time, the sex workers do not have the right to exercise", she says.

At the beginning, the owner of the peep show we do not take seriously, but very soon, he was enthusiastic and lent us free of charge its local

Stefan Strahammer, one of the organizers of the festival.

Voodoo Jürgens, one of the great names of the song vienna is one of the last that night to happen. Installed on a circular platform rotating in costume disco opposite to the cabins, it will give 20% of his seal to two associations supporting prostitutes in Austria.

read also : "Courage of The World Tour" of Celine Dion will return to France in 2021, and by the Vieilles Charrues

prostitution is legal in this central European country and brothels, many in the capital, were closed in mid-march by the government, such as bars and restaurants, to curb the spread of the new coronavirus. They do not yet have the right to reopen and the precariousness of sex workers has worsened. "They are increasingly relegated to the periphery, and this project is a good way to put it back in the light," says the singer to the AFP, wearing rabbit ears, before beginning her show...