In Cremona, the violin makers are struggling for their survival in the face of the health crisis and the chinese competition

In Cremona, a small town in the north of Italy, the workshops of violin-making are everywhere: 160 to 70,000 inhabitants. Located at the bottom of a flowery cou 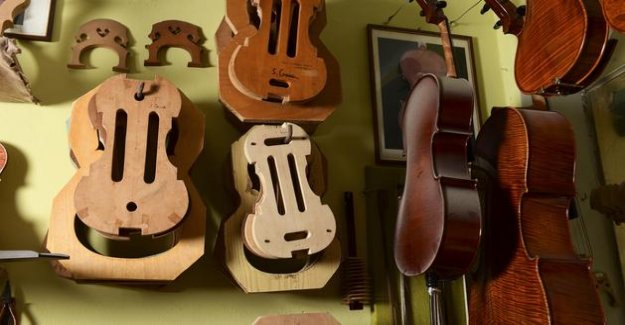 In Cremona, a small town in the north of Italy, the workshops of violin-making are everywhere: 160 to 70,000 inhabitants. Located at the bottom of a flowery courtyard, which works as a Japanese, that of Stefano Conia has not changed for decades. This Hungarian origin, aged 74 years, is one of the deans of the luthiers crémonais. He continues to work although it is in retirement for almost ten years. "If I was making more violins, life for me would be complete. Every day, I am here in the workshop. It is an antidote against old age", smiled the man in his seventies whose father was himself a luthier in Hungary.

read also : The music is the wish of all wood

Her determined face to that of her son, on which display boards, files, clamps, compasses, brushes, or small saws. "Choose the school it was natural. I spent my childhood here in the "bottega", that my dad opened in late 1972, two months before my birth," says his son, Stefano Conia "the Young". "I was playing with the wood, the musicians came to buy their violins and played... This has always been a special atmosphere, which I liked a lot," says the one who, as early as 7-8 years of age, began to touch the tools.

74 years, the Hungarian Stefano Conia is one of the deans of the luthiers of Cremona. His son Stefano Jr, 47 years old, has followed the same path. Here in their workshop in Cremona on June 9, 2020. Miguel MEDINA / AFPSur the footsteps "of the greatest"

As for his father, the passion is pegged to the soul. "The instruments are a bit like children, they live through the energy that we give them, it is a part of us that will live on after our death".

The majority of the luthiers of Cremona are also foreign. Many have come to study at the international School of violin making and have remained. "The school was born in 1938. The first teachers were foreigners and students come from around the world. There's this saying that says: “no one is prophet in his own country”. And it is true that we, the luthiers crémonais, are really little: there was about 30% Italian and 10% of Crémonais," smiles Marco Nolli, 55 years old, which belongs to this rare species.

The master Italian luthier Marco Nolli pose with a cello and a violin in his workshop in the centre of Cremona on June 9, 2020. Miguel MEDINA / AFP

Bénédicte Friedmann, who is French, 45 years old, lives in the last twenty years in "the birthplace of violin making". "Come to Cremona, it was - it may be a little pretentious to say it - like walking in the footsteps of the greatest, Stradivarius, Guarneri, Amati", she says.

read also : To capture the sound of the Stradivarius, Cremona holds his breath,

"to Be a violin maker here, it is able to devote 100% to the creation of instruments. And the more we make, the better it becomes", she notes. She explains that in France, for example, a lot, to earn a living, make repairs, the reméchage bows, or sell accessories, which leaves them little time for their art.

The coronavirus was a serious blow

Giorgio Grisales, president of the consortium

Finding customers is not always easy, after the growth recorded in the years 1960, 70, or 80. "Our market, which is a market of elite, was reduced", explains Giorgio Grisales, the president of the consortium. The theatres are less in number, the representations of less frequent, and the violinists experienced prefer to the more often old instruments of the Eighteenth and Nineteenth centuries.

read also : a Requiem for Wolf Music, an institution in the musical life of europe for nearly two centuries

So that "Cremona lives virtually export only", "the coronavirus has dealt a severe blow". But even before the epidemic, "the sector was in difficulty because of the ruthless competition from China and eastern Europe", stresses Giorfio Grisales. China is the leading producer of instruments, bows, with $ 77.8 million of exports in 2019 (for 1.5 million instruments). It is more than half of the global market, according to the international trade Centre (ITC).

The violins are on display in the shop and the workshop of Giorgio Grisales, master luthier Italian-colombian and president of the consortium of violin makers Antonio Stradivari of Cremona. Miguel MEDINA / AFP

Italy positions itself in the fifth position (4.6% of world exports), behind the United Kingdom and Germany, but ahead of France. Its main customers are Japan and the United States. The Italian luthiers to face the competition of fakes, some pretend to be crémonais instruments manufactured elsewhere, but also-and above all cheaper products.

"The instruments of the master begin to 25,000 euros", while others, of a quality slightly lesser but still excellent, are sold around 15,000 euros, details of Giorgio Grisales. At the same time, for 200 euros, or even less, it is possible to have a chinese violin, a bow and a case. "These are economic instruments, made in series, and for those who begin to study," explains the violinist baroque Fabrizio Longo.

on his side, "Cremona is a reference point important. The school crémonaise ensures clear parameters: choice of wood, care in the realization... But of course the quality depends on the individual luthier", he says.

read also : The secret code of the luthiers parisians in the Nineteenth century decrypted

In China, "more often than not, the violins are manufactured in a "factory people": they are hand-made, but 10 luthiers are working every day on the same parts. It is a chain work and in the end, we get an assembly. There is no uniqueness, authenticity," explains Bénédice Friedmann. Here, "to make an instrument, it takes at least 300 hours", that is, between two and three months, " says Giorgio Grisales. The species used are the same as those of the great masters: flamed maple and spruce.

luthière French Bénédicte Friedmann is working on a violin in his workshop in Cremona on June 9, 2020. Miguel MEDINA / AFP

in Addition to the competition étrangère, who shows little respect for the rules in terms of sustainability (deforestation...), the difficulty also comes from the large number of violin makers in Cremona, more than 300 officially. "Getting known is a little laborious", and the search for order "is a permanent quest", said Bénédicte Friedmann. She laments the unfair competition from colleagues working on the black, and escape the taxation of some 60% imposed on the artisans.

But "at the same time this large number creates an emulation", and "when people ask me what is the most beautiful instrument I've made, for me it's always the next..."