temporary facilities and spectacular views of the artist-visual artist american of Bulgarian origin Christo appeared in different corners of the globe, in dista 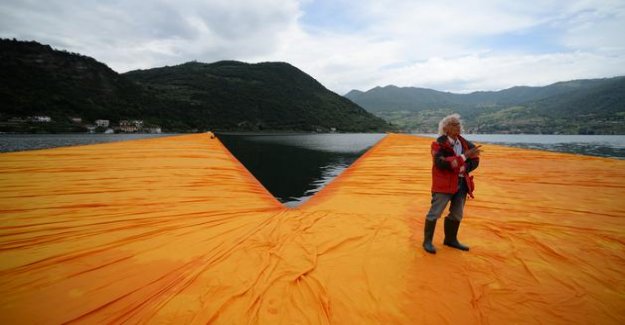 temporary facilities and spectacular views of the artist-visual artist american of Bulgarian origin Christo appeared in different corners of the globe, in distant landscapes as well as in the most emblematic places in large cities.

here are six of the most famous are :

one of The first works of Christo and his wife and collaborator Jeanne-Claude is a wall of 89 barrels of oil and gasoline erected in a street of Saint-Germain-des-Prés in Paris. Titled "The iron curtain", this "barricade art was their way to protest against the Berlin Wall built a year earlier.

The mayor of Paris had not given his permission, but the two artists had still continued to work, blocking traffic for up to eight hours before having to disassemble the installation.

from "the Christo and Jeanne-Claude, Paris !" Public information library Of the Centre PompidouLe Pont-Neuf, Paris, (from September 22 to October 7, 1985)

The work is presented to the eyes of the spectators fourteen days. The artist wants to offer a new perspective on the oldest bridge in Paris.

But it will be very difficult to organize. Beyond that, the finance that it required. It is also necessary to obtain authorizations. It was first necessary to convince the mayor of Paris. Madame Pompidou, who has always been a collector of the works of Christo, has turned in favour of the artist. Things went smoothly, and could not fail, but in 1984, Jacques Chirac gave his final agreement. As writes Jean-Marie Tasset, in Le Figaro that describes the installation : "Christo is perhaps an artist megalomaniac, but it is also a organizer, and a strong man of courteous as he says: "This is my project the more urban !"."

scale Model of the Pont-Neuf "packaged" by Christo AFPChristo with Jack Lang as The Pont-Neuf. AFP"The umbrellas", and the United States and Japan (1991)

Nearly 3,100 umbrellas giants have been opened on the same day in California and Japan for a concurrent installation that will last 18 days, after months of work.

Nearly half of all umbrellas measuring six meters in height were blue and installed in the Ibaraki prefecture in Japan; the other in California were a bright yellow.

The installation "reflected the similarities and differences of life styles and use of the land in two inland valleys in Japan and the United States," explained the artists.

The online magazine Artsy had described this work as "one of the greatest projects on Earth of our time." But the project has been marked by two tragedies : in 1991, an American is being crushed by an umbrella giant and a worker of japanese died during the disassembly of these same umbrellas.

Wrapped in a fabric of silver, totalling 100,000 m2, the packaging of the German parliament, iconic work of Christo, could not be conducted, that twenty years after the artist had asked for permission.

Rejected by Berlin on many occasions, the work was able to see the light of day after a vote in parliament in 1994.

"It was one of the most beautiful things I've ever seen," said Christo in the british daily The Guardian in 2017.

Visited by millions of people, the packaging has been removed at the end of two weeks, while the city wanted to keep it a little longer.

Created on the lake Italian Iseo, "The Floating Piers", was an installation of ephemeral three kilometers long and composed of a blend of 200,000 cubic yellow high density polyethylene installed on the lake.

These walkways allowed visitors to reach the island of Monte Isola and the small island of San Paolo on the lake, giving them the impression of walking on water "or perhaps on the back of a whale", said Christo. This installation of sixteen days was the first of Christo after the death of his wife, Jeanne-Claude in 2009, even if the two had designed together and had worked since 1970.

Walk on the water or on the back of the whale. It was the dream of Christo. MARCO BERTORELLO / AFP"The Mastaba of London" (2018)

The artist Christo unveils his latest work, a mastaba (tomb building egyptian) floating on the lake Serpentine in Hyde Park in London. A monumental installation, consisting of 7 506 metal drums, intended as much to stimulate debate as to "stimulate the senses".

"there is no message: it is up to each one to discover something", said Christo to the AFP.

The artist Christo in front of his Mastaba floating on the lake Serpentine in Hyde Park in London. Niklas HALLE'N / AFP