At the Philharmonie de Paris, a return to desks in small committee

No public, two-metre distance between wind instruments, tissues on the ground to collect the spatters: with his first concert post-confinement, the Philharmonie 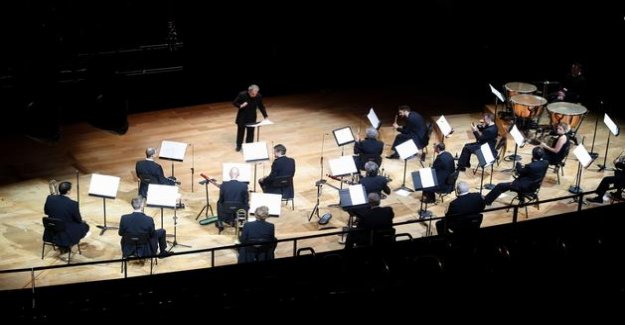 No public, two-metre distance between wind instruments, tissues on the ground to collect the spatters: with his first concert post-confinement, the Philharmonie de Paris has started the first step of a long return to normality.

In the great hall Pierre Boulez Wednesday, may 27, the musicians of the Orchestre de Paris repeated in a nice atmosphere surrounded by technicians and operators masked, a few hours before the broadcast of the recording on Arte Concert, the platform Philharmonic Live.

we smile, We exchange jokes and we have fun even cheer a little at the end of each piece facing an empty room, except for a handful of journalists.

homecoming after two months of confinement, "it is as if we had done a dive and then, once out of the water, took a deep breath of fresh air," said AFP Philippe Aïche, the first violin solo that suggested the program for this concert closed to the public.

like most germans or scandinavians who have already made the experience, the event has complied with the measures of distancing and hygiene.

to Each his lectern

One-half feet between the strings, two meters between the wind instruments, while "generally, the violins play on the same console and the horns are 80 cm apart from each other to form the quality of sound of the group," explains Mr. Aïche.

"It was indicated, the flow of traffic (off-shelf) there are wipes specific for cleaning the instruments, the scores are photocopies so that they do not go hand-in-hand and each has a desk," says Laurent Bayle, director general of the Philharmonie.

If we expected to see the violinists and viola players that are hidden or flute players wearing visors, it is nothing; they wear a mask off the shelf, but "felt safe enough" on stage, " he says.

Several studies recent techniques, including one conducted by the prestigious Vienna Philharmonic and other not several orchestras in German, argue in effect that there is no risk of contamination in an orchestra if the musicians are placed more than a metre from each other.

"I had planned a visor with a small notch to put the flute; I had bought ten, but after reading the analysis, ( ... ), I saw that there was no hazard, reassures himself the flutist Vicens Prats.

Even with his instrument, considered "the most dangerous" in terms of projections, the breath did not exceed 80 cm, always according to these studies.

The program of this first concert is in a degraded mode, with less than 20 musicians by song : 16 for an extract from Parsifal by Wagner, 13 for Siegfried-Idyll of the same Wagner and six for the sextet from Capriccio by Richard Strauss.

For the excerpt from Parsifal - a transcription for chamber orchestra-, a problem quickly arose, and the musicians have asked Philippe Aïche would serve as their conductor.

"With two meters (distance), it was extremely complicated to keep the visual contact and hearing problems among musicians", he says. "In Parsifal, there are a lot of sound mass and it is difficult to find the markers," says Benoit de Barsony, horn-player. "It was quite unsettling", he adds.

The Philharmonie de Paris, which is cut in five years of existence a reputation of international excellence, thanks to its exceptional acoustics, is going to renew the experience on Thursday with the violinist Renaud Capuçon, who has just been appointed to the head of the Lausanne Chamber Orchestra and the 22 other players on The Metamorphoses of Strauss. Other initiatives will follow this summer.

other training is starting to come back also, as the Dijon Opera offers since Wednesday concerts streamed, or the two orchestras of Radio France, who will offer a concert weekly in June and July, broadcast live on France Musique and Arte Concert.

But this will not provide a response to three major unknowns. What gauge for concert halls ? The public will it be ? And when will it be possible to resume the great symphonies, Mahler, Wagner or Bruckner ?

"For Parsifal, it has taken three-quarters of the scene as it is only 16. Imagine 80 musicians, what would you do? This is not possible", concludes Philippe Aïche.

The editorial team conseilleLa Philharmonie de Paris will again vibrate to the rhythm of the music... but without publicLes orchestras of Radio France, is inviting you to play with them in vousAucun comment