Algerian elections can be postponed

"Algerian election can be postponed" "For the thirteenth Friday in a row, people gather around in Algeria to protest against the ruling elite, which complic "Algerian election can be postponed"

"For the thirteenth Friday in a row, people gather around in Algeria to protest against the ruling elite, which complicates the logistical organisation ahead of the elections."

"The intense protests can lead to the presidential elections on 4 July is postponed to the end of the year, according to sources for Reuters."

"as a result of the protests, resigned president Abdelaziz Bouteflika at the beginning of april, after two decades in power." 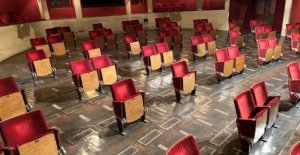 A berlin theatre removes 70% of its seats in order... The father was assaulted by the son with the axe and...