like France, the theatres are preparing to reopen beyond the Rhine. In the German capital, the Berliner Ensemble, is forced to cancel all performances until the 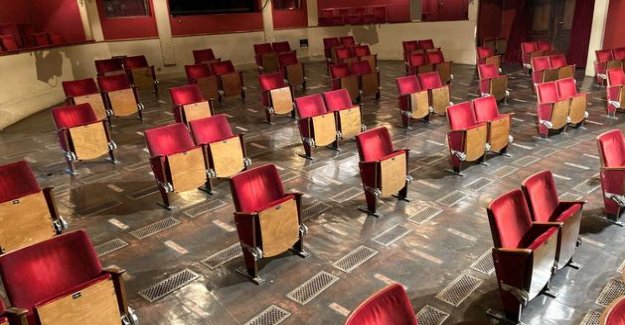 like France, the theatres are preparing to reopen beyond the Rhine. In the German capital, the Berliner Ensemble, is forced to cancel all performances until the end of the season, has already started to redevelop his room for a resumption in September.

read also : The theatre Bobino found a bit of a smile

To stick to the standards of distancing social will continue to be in force until further order, the theater has decided to remove 500 seats out of 700, who usually occupy the space. 70% of the gauge. Every second row has been completely removed and no longer remain as seats isolated that alternate with pairs of seats for couples of spectators.

The auditorium now looks like an installation, it is not only blank rows. By removing the seats, the others are easier to access.

"The seats have been removed in the course of the last 10 days. We try to find creative solutions to the current regulations on the coronavirus," said Oliver Reese, artistic director of the Berliner Ensemble. "The auditorium now looks like an installation, it is not only blank rows. By removing the seats, the others are easier to access", he added. Oliver Reese has also stated that this development would allow for a restoration of the seats.

extraordinary measures before a return to the normal

The measures of distancing does not stop there, since it is expected that the checking of tickets is done without contact. "The audience must wear a mask until they reach their seat, and there will be a system of crowd management at the entrance", said the artistic director. "The order of entry will be strictly regulated. Guests will be driven to their place with small groups of about six people, so that there are no traffic jams, and that the distances between individual visitors, couples, or groups can be observed".

500 of the 700 seats have been removed. Berliner Ensemble/Facebook.

If all the season 2020 has been turned upside down, Oliver Reese isn't worried and place a blind confidence in his teams. "We had to change the plans for our next season several times in recent weeks. However, I am pleased that we have found ways, creative and fun with our actors and our artistic teams, to deal with the regulation of the coming season, with a floor plan really extraordinary," he continued.

it recalls that these measures are temporary and that the seats will find their place, Oliver Reese drives home the point that the performances will take place with the same energy for the "200 people to 700".

The editorial team conseilleFranck Riester is looking for a resumption of performances in June and cinemas in juilletAvignon Online, the solidarity project, which recreates the festival in ligneLe shakespearean theatre the Globe, threatened with bankruptcy due to the coronavirusSujetsBerlinCoronavirusthéâtreaucun comment