War in Ukraine: the European Union in dispersed order on the reception of Russian deserters

They too are fleeing the war. 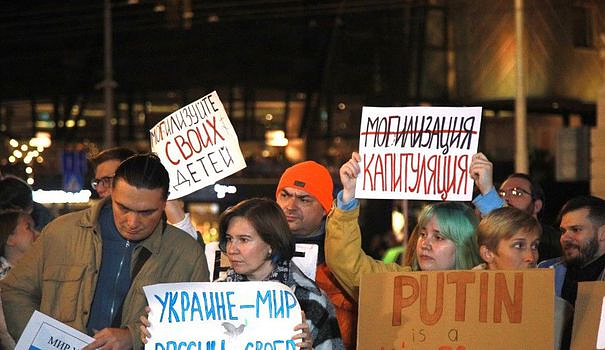 They too are fleeing the war. Since the announcement made by Vladimir Putin, this Wednesday, September 21, of the partial mobilization of the reservists, thousands of Russian citizens have been seeking to leave their country in order not to go and fight in Ukraine. An exodus has already been observed for several months and, according to Galia Ackerman, a specialist in post-Soviet Russia, "at least 500,000 people have already fled Russia since the start of the conflict". But, until then, it mainly concerned thinking heads, those who have the means to settle quickly elsewhere.

From now on, it is more modest fringes of society who are trying to flee. Shortly after the Russian president spoke, searches for plane tickets to the countries still served exploded, while other mobilizers took their cars to the nearest border country. On Wednesday, on BFMTV, a 30-year-old Russian explained the reason for his choice, and that of others: "I'm leaving because I'm not crazy and I don't want to die."

Russians who have opted for a destination that is not too far from their country do not have a very wide choice, European airspace being largely closed to Russia. They therefore head mainly to Turkey, Armenia, Georgia or even Kazakhstan. But some leave by car in the direction of Finland or the Baltic countries. A question then arises: should the European Union welcome Russian deserters as political refugees? On this point, the member states are divided, and a meeting of ambassadors is to take place on Monday 26 September.

For the time being, the three Baltic States - Estonia, Latvia and Lithuania - are hostile to the idea, and have decided to close their borders with the big neighbor. On Twitter, the Latvian Minister of Foreign Affairs, Edgars Rinkevics, justified this choice: "Many Russians who are fleeing Russia because of the mobilization agreed with the fact of killing Ukrainians. We must not not consider them conscientious objectors. There are considerable security risks in hosting them and there are plenty of countries to go to outside the EU," he wrote.

Same opinion on the side of Lithuania, which considers, through the voice of its Minister of Defense, that "conscription is not a sufficient reason to have political asylum", before recognizing that "acts of persecution" could change that. Anyway, according to Vilnius, most Russians do not flee to Europe.

Sharing a 1,340 kilometer border with Russia, Finland provides a good vantage point for observing the situation. The border guards are certainly reporting a doubling of the number of entries of Russian citizens - 6,470 on Thursday against 3,100 on Monday - but in no way a tidal wave. "Even if they flee a regime in which they do not recognize themselves, the majority of deserters should opt for countries that are not hostile to Moscow", explains to L'Express Claes Levinsson, professor of European studies at the University of Uppsala, Sweden. "Why? Because there is the risk of being poorly received in countries that are enemies of Russia, and above all of being expelled". Indeed, even if European law guarantees a right of asylum, the management of national borders is the responsibility of the Member States. "The migrant crisis in 2016 had clearly shown the disparities in reception depending on the country, remembers Claes Levinsson. In both cases, it is a question of welcoming people of whom European governments are wary."

Particularly welcoming during the 2016 migration crisis, Germany came out in favor of welcoming Russian deserters. Interior Minister Nancy Faeser said that "those who courageously oppose Putin and thus put themselves in great danger can apply for political asylum in Germany", while specifying that the study would be done in case on a case-by-case basis, so as not to conflict with the sanctions regime. As for France, it wishes "to allow contact with Russian citizens", in the words of the Minister of Foreign Affairs, Catherine Colonna.

If the national voices disagree, the European authorities show themselves in favor of a welcome. The President of the European Council, Charles Michel, who represents the heads of state and government of the members of the European Union, believes that national legislation should allow the reception of "those who are in danger because of their political opinions , because they don't follow the crazy decision of the Kremlin". It is on this ideological basis that the intra-European discussions should begin on Monday.