War in Ukraine: Russia will formalize the annexation of four Ukrainian regions

While the proclamation of the official attachment of the four Ukrainian regions having declared themselves for the "yes" to integration into Russia should take place this Friday in the middle of the day, the UN Security Council will vote on the same day a resolution condemning the referendums organized by Moscow. 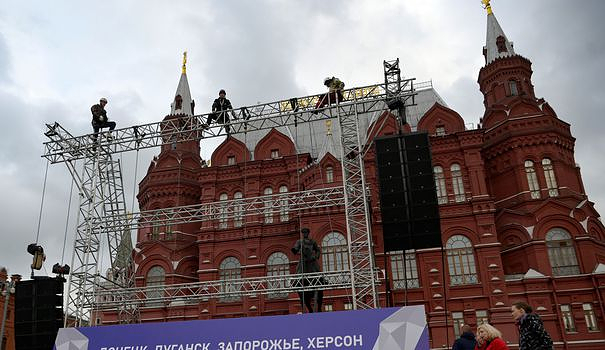 While the proclamation of the official attachment of the four Ukrainian regions having declared themselves for the "yes" to integration into Russia should take place this Friday in the middle of the day, the UN Security Council will vote on the same day a resolution condemning the referendums organized by Moscow.

In recent hours, large signs have been installed in Red Square, Moscow. It reads: "Donetsk, Luhansk, Zaporizhia, Kherson, Russia!". This Friday, September 30 is a day of celebration for Vladimir Putin. He planned to formalize, in the middle of the day, the annexation by his country of the Ukrainian regions where referendums were organized. Pro-Russian officials from Donetsk, Luhansk, Zaporizhia and Kherson were in the Russian capital on Thursday, according to local media. According to the Kremlin spokesman, the president's speech will be "voluminous".

The Russian capital prepared for festivities with restricted traffic on Friday. A concert is notably planned in the shadow of the Kremlin walls, during which Putin could make an appearance. "I order to recognize the state sovereignty and independence" of these two regions of southern Ukraine, he said in texts published Thursday evening. The referendums, deemed illegal by kyiv and the West, have been hastily organized, as the Ukrainian army has regained ground in recent weeks.

In reaction to the cases of mobilization of the elderly, students, the sick or conscripts without military experience reported by the media and Russian citizens on social networks, Vladimir Putin conceded, Thursday evening, during a meeting by videoconference with its security council broadcast on Russian television, that "this mobilization raises many questions". "All mistakes must be corrected and made sure they don't happen again. If a mistake has been made, those who were summoned without proper reason must be brought home," he said.

Kremlin spokesman Dmitry Peskov had already admitted on Monday "errors" in this mobilization, supposed to concern 300,000 reservists with military experience or useful skills, such as truck drivers. But this mobilization above all triggered demonstrations and the flight of thousands of men abroad.

In order to react to the imminence of the proclamation of the annexation by Russia of four regions of Ukraine, Volodymyr Zelensky will convene a meeting of his National Security and Defense Council. "There will be decisions," he said, adding that Ukraine "knew how to react to any Russian action." In his daily video address, he also addressed the Russian people, asking them not to support a war that deprives them of "a normal economy, a decent life and respect for all human values". Without naming the master of the Kremlin, he calls on Russian citizens to "arrest whoever wants war more than life".

The United Nations Security Council will vote this Friday on a resolution condemning the "referendums" of annexation organized by Moscow in the Ukrainian administrative regions. The draft is supposed to point out the invalidity of the results and call on states not to recognize them. If the Russian veto will prevent any adoption, the positions of China and India are awaited. This week, Beijing called for respect for the territorial integrity "of all countries". Last February, when the Russian invasion of Ukraine was launched, these two countries abstained during the vote on a resolution denouncing an "aggression" by Russia.

The US Senate voted, Thursday evening, a new envelope of more than 12 billion dollars for Ukraine, during the adoption of an extension to the federal budget of the United States until December. The text, approved by senators from both camps, includes a large military component for kyiv. Some three billion dollars have thus been released by the United States to train, equip and pay Ukrainian troops. The package also includes more than $4.5 billion to ensure Ukraine's "continuity of government" and meet Kyiv's macroeconomic needs. Several billion dollars will also be allocated to the American army, which will use them in particular to finance the deployment of troops in neighboring countries and to replenish its stocks of armaments. This new envelope would bring to more than 65 billion dollars the aid provided by the United States to Ukraine since the beginning of the year.

After Poland and the Baltic countries, it is Finland's turn to announce that Russian nationals with a European tourist visa will no longer be able to return to Finnish territory as easily. The closure is not complete but should halve arrivals, says Helsinki.