Ukraine suffered a new deadly salvo from Russian missiles on Monday, leading to further power and water cuts in a country already in energy crisis. 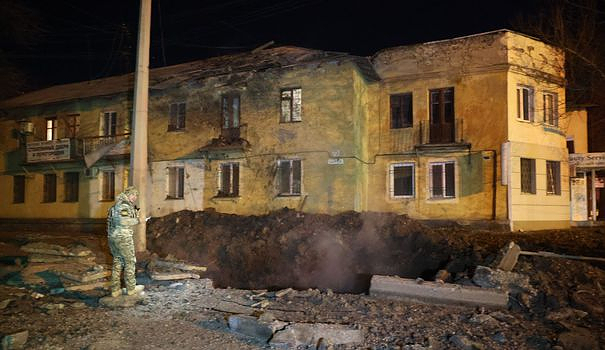 Ukraine suffered a new deadly salvo from Russian missiles on Monday, leading to further power and water cuts in a country already in energy crisis. The Russian army acknowledged "a massive strike carried out with high-precision weapons" on Monday around 12:00 GMT which targeted Ukrainian military sites and energy infrastructure linked to Ukrainian forces. On the Ukrainian side, as winter set in, emergency repairs were underway, according to Ukrenergo.

The end of the Ukrainian conflict will be achieved in particular by offering "security guarantees for Ukraine", declared Monday the chief diplomat of the EU, Josep Borrell during a colloquium organized in Paris. "For Russia, we will talk about it later," he added, after recent statements by Emmanuel Macron on the guarantees to be given to Moscow.

A drone attacked an airfield in Russia's Kursk region on the border with Ukraine, its governor said on Tuesday, a day after Moscow accused kyiv of hitting two of its airbases with drones. Due to a "drone attack in the Kursk airfield area, an oil storage tank caught fire. There were no casualties, Governor Roman Starovoyt said on social media.

In addition, on Monday, Russian air bases, far from the border between the two countries, were the target, according to Moscow, of raids carried out during the day by Ukrainian drones, which killed at least three Russian soldiers. Kyiv did not confirm.

Ukraine suffered a new deadly salvo from Russian missiles on Monday, causing further power and water cuts in a country already in energy crisis. These new Russian strikes on Ukraine come on the day of the entry into force of the mechanism for capping the sale price of Russian oil decided by the West, who are thus trying to dry up Moscow's manna to finance its military effort.

Anti-aircraft sirens sounded again across Ukraine which has "suffered an eighth massive missile attack by a terrorist state. Unfortunately, there is already damage to the energy infrastructure", indicated the national operator, Ukrenergo . However, the alerts were quickly lifted and Ukrainian President Volodymyr Zelensky assured that his country's anti-aircraft defense had succeeded in "shooting down most of the Russian missiles". According to the deputy head of the Ukrainian presidential administration Kyrylo Tymoshenko, an initial report shows at least four dead and three injured, including a child. The Russian strikes have caused further water and electricity cuts in several cities and regions, while winter temperatures are well established.

"Because of the consequences of the bombardments (...), to maintain the balance between the production and the consumption of electricity, a system of emergency cuts will be set up in all the regions of Ukraine. electricity will be supplied as a priority to essential infrastructure," Ukrenergo announced on Telegram.

"The exit from the war will have to be done in compliance with international legality," declared Josep Borrell in Paris during a symposium organized by the European Jacques Delors Institute, detailing that this involved the payment of reparations by Moscow, the judgment war crimes, troop withdrawals and "security guarantees for Ukraine". Before adding, "for Russia, we will talk about it later", in implicit reference to a recent statement by Emmanuel Macron.

The French head of state explained on Saturday that he had discussed with President Biden on "the security architecture in which we want to live tomorrow", referring to the fact that it would be necessary to give "guarantees for its own security to Russia on day when it will come back around the table" of the negotiations. These statements had drawn criticism in Ukraine and in some of the Eastern European countries with particularly firm postures on the position to adopt vis-à-vis Russia, which sometimes accuse Emmanuel Macron of being too lenient or of making too many overtures. vis-à-vis Moscow, which is defended by Paris, support of kyiv with the other European countries.

In his speech, Mr. Borrell also considered that "Moscow cannot win the war, but can destroy Ukraine", in reference to the strategy of Russian strikes against Ukrainian infrastructure, in particular energy.

The Twenty-Seven of the EU meet Tuesday at a summit in Tirana with the leaders of six Western Balkan countries in order to reinvigorate a partnership deemed even more essential in the context of Russia's war against Ukraine. Enlargement policy has returned to the top of the agenda in recent months, European Commissioner Oliver Varhelyi said on Friday in Belgrade, calling on the EU to "keep this momentum" and "live up to expectations".

Balkan countries, stuck in the EU's antechamber for years, have often expressed frustration with a long and demanding integration process, most recently seeing the bloc quickly grant candidate status to Ukraine and Moldova. But the war in Ukraine has also underlined the importance for Europeans of stabilizing this fragile region of south-eastern Europe, of countering the influence of Russia there as well as that of China, which has invested in the infrastructure of these countries. In July, the EU finally opened accession negotiations with North Macedonia and Albania (candidates since 2005 and 2014 respectively). These talks have also been ongoing for several years with Montenegro and Serbia. In October, the Commission recommended granting candidate status to Bosnia and Herzegovina, a decision that will come to the European Council on December 15-16.