War in Ukraine: last day for the annexation referendums wanted by Putin 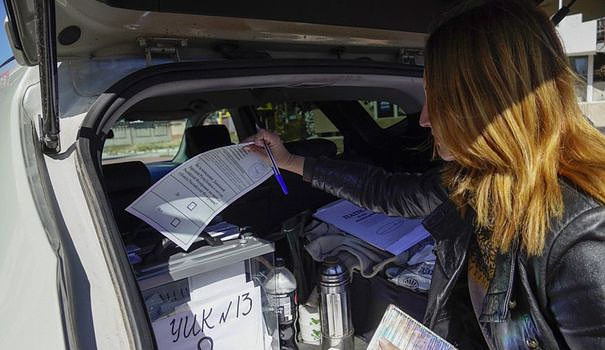 The day after. This Tuesday ends the referendums organized by the Russian invader in Ukraine. Putin is preparing to announce the "yes" - the only possible result in the eyes of propaganda and authoritarianism. The leader takes care of the timing, the centerpiece of the credibility of this theater operation. And after ? The autocrat has already announced that he can resort to nuclear weapons if his territory is threatened. Westerners have once again castigated this blackmail, the UN and the United States in the lead. In parallel, the war continues, the Ukrainian counter-offensive too, despite a slowdown in recent days, in particular because of the weather.

This Tuesday marks the last day of the annexation "referendums" organized in 4 regions of Ukraine. 100,000 square kilometers of territory, which could be attached to Russia as of the weekend. Even if kyiv, Western countries and many observers consider the polls currently taking place in areas controlled by Russia to be "simulacra", Moscow is keen to respect the appearance of a legitimate process.

Therefore, a delay will be necessary for the counting. The "provisional results" should be announced by the "electoral commissions" set up by Moscow in each of these territories, at the earliest Tuesday evening or in the days that follow. If the "yes" wins - which there is no doubt about - the Russian Parliament will vote for a treaty formalizing the integration of the four regions into Russian territory.

The Russian news agencies TASS and Ria Novosti, citing parliamentary sources, reported over the weekend that a draft law to this effect could be submitted to the Duma on Tuesday evening, before adoption the following day at a session extraordinary. The text will then have to pass before the upper house of Parliament, the Council of the Federation. A formality that could be completed on Wednesday or Thursday, according to Russian agencies. Putin could formalize on September 30. In 2014, he signed a treaty linking Crimea to Russia just two days after the "referendum".

"The era of nuclear blackmail must end," the UN secretary general pleaded on Monday, calling for the "elimination" of all nuclear weapons after Russia's threats about their possible use in Ukraine. "The Cold War had brought humanity to a few minutes of annihilation. Today, decades after the fall of the Berlin Wall, we hear again the nuclear intimidations", regretted Antonio Guterres during a special meeting of the General Assembly on the occasion of the International Day for the Elimination of Nuclear Weapons.

Last week, when announcing the mobilization of reservists, Russian President Vladimir Putin threatened to use "all means" at his disposal to protect himself, reviving speculation on the risks of nuclear conflict, for the first times since 1945. The White House said it had called the Kremlin to say Russia faced "terrible" retaliation if necessary.

Near the Russian border in northeastern Ukraine, investigators are examining a new suspected mass grave site at an abandoned chicken factory farm littered with debris. They don't yet know how many bodies lie here - the military and officials say 90 to 100 bodies, without giving details. The signs of the fighting are present all around. The roof of the hangar pierced with shrapnel shards was smashed by the destroyed turret of a tank, which flew before crashing into empty cages of the chicken coop, reports AFP.

Forensic pathologists are expected there for this week, as soon as the area is sufficiently safe. On Monday, the soldiers on the spot moved cautiously, avoiding unpaved areas and on the lookout for mines and unexploded shells. If confirmed, the find would come just a week after one made in a forest near Izium, where Ukrainians uncovered hundreds of graves after Russian forces left. A total of 447 bodies were exhumed there, almost all of them civilians. Ukrainian President Volodymyr Zelensky told the American channel CBS News on Sunday that kyiv had discovered "two more mass graves, large ones with hundreds of people", without specifying which ones.

Three weeks after a dazzling breakthrough in the northeast which allowed them to regain thousands of square kilometres, the Ukrainian forces are maintaining pressure on the Russian army in the Donbass, a region that Moscow wants to completely annex. Without succeeding in imposing the same pace as at the start of the counter-offensive. Last weekend, torrential rains particularly complicated the task of troops in kyiv.

In the Kharkiv region (north-east), mostly retaken from the Russians during an offensive in recent weeks, the Ukrainians now control a large part of the city of Kupyansk, a crucial rail hub previously used by Russia to supply its forces. deployed further south. A narrow strip on the eastern bank of the Oskil River remains in the hands of Russian forces, preventing the Ukrainians from advancing towards the Russian-controlled Lugansk region.

Further south, the Ukrainians are now maneuvering towards Lyman, 50 km south-east of Izium, north of the Donetsk region (east). This city serves as a lock in the Russian system, between the front north of the Kramatorsk salient and the Oskil River, through which passes most of the supplies for the Russian forces deployed in eastern Ukraine. Kyiv on Friday claimed responsibility for taking Yatskivka on the eastern bank of the Oskil River, 30 kilometers northwest of Lyman. And according to the Institute for the Study of War (ISW), a US-based think tank, "Ukrainian forces are fighting Russian positions at Karpivka, Nove and Novoserhiivka", north and east of the city .

If the two camps are still striving to seek to grab territory, the autumn may well freeze positions in the theater, predicts a European military source. "It is very likely that we will see a pause in operations in the coming weeks, the time to reorganize the logistical flows and to replenish the various forces. Especially since in a few weeks the little "raspoutitsa" will force to stay on the roads, making the forces vulnerable", underlines this source. This seasonal phenomenon turns dry land into sticky mud, which prevents vehicles from progressing. The environment, stronger than war.