Prior to their withdrawal from Kherson, which they had occupied for eight months, Russian forces destroyed several energy infrastructures. 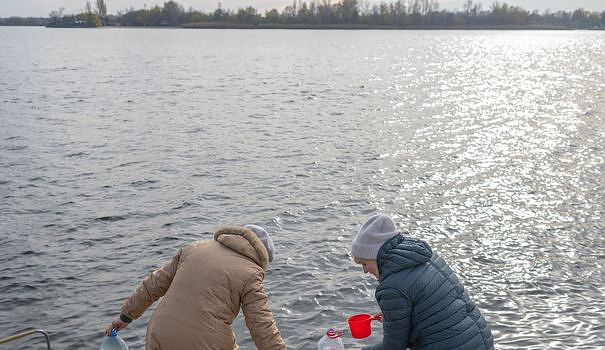 Prior to their withdrawal from Kherson, which they had occupied for eight months, Russian forces destroyed several energy infrastructures. This is enough to worry the mayor of this Ukrainian city who described, on November 14, a "serious" humanitarian situation due to the lack of water, medicine and bread. Deprived of this blue gold, the inhabitants go to draw from the Dnieper river which borders the city. To recover the precious contents, the Ukrainians go to a pontoon and bend down until they reach the surface of the river with their hands. "There are enormous difficulties in accessing running and drinking water, the whole country is concerned," notes L'Express Achille Després, spokesperson for the International Red Cross in Ukraine.

Unsurprisingly, areas very close to the front lines are more so. The southern city of Mykolaiv, a major port on the Dnieper estuary under Ukrainian control, has been without fresh water for the past six months: bombardments have destroyed the main water pipes. The Russians, according to Ukrainian officials, also closed the city's fresh water intakes after invading the area. "The most affected by this water shortage are the vulnerable people. First of all, seniors and people with disabilities who have not been able to leave the city", continues Achille Després who was there a week ago. twenty days, within this bruised city where 200,000 people still live.

On site, the Red Cross has installed dozens of drinking water distribution points. “In the street, it is striking to see people moving around with plastic water containers. They take advantage of every opportunity to fill up,” notes the spokesperson. More generally, the international organization is working with local water authorities, providing machines to soften water. Objective: that it be usable in the context of domestic activities (which does not make it drinkable). "Without softening, the water is too abrasive and damages the pipes, which weakens the heating system", warns Achille Després, specifying that the Ukrainian heating is connected to the hydraulic system. In the long term, the lack of water can also hamper the proper functioning of hospitals, which are already supplied by the Red Cross.

Since the Russian invasion on February 24, the Kremlin's massive strikes on technical installations in Ukraine have damaged water and electricity networks, already "weakened" by years of conflict, according to a UNICEF statement. . According to Ukrainian President Volodymyr Zelensky, 30 to 40% of Ukraine's energy structures are affected. In total, more than a thousand municipalities would be deprived of electricity. If the conflict were to get bogged down, the authorities fear the development of diseases such as cholera, one of the consequences of the war in Syria. “For the moment, the risk is difficult to assess, even if I think it is still too early to have fears”, assures the spokesperson for La Croix Rouge.

Over the months, water has turned into a weapon of war with a double effect: in addition to weakening populations, access to hydraulic infrastructures is a strategic occupation issue. "From the beginning, water was at the heart of the conflict. In the first hours after the special military operation, the Russians destroyed a dam that had been created by the Ukrainians to block the Crimean Canal (Canal Sulina created by Stalin) linking the Dnieper to the Crimea, supplying water to the Crimean population", underlines Emmanuel Dupuy, president of the Institute Prospective and Security in Europe. In a similar vein, Peter Gleick, a senior fellow at the Pacific Institute, a California think tank that documents the impact of conflict on water resources around the world, says Russia has militarized water.

In the first three months of the war, said Peter Gleick, he and his colleagues documented more than 60 cases in which Ukraine's civilian water supply was cut off. If this "hybrid" strategy is part of the operational lines of all wars, "the systematization of the targeting of civilian infrastructure by the Kremlin is new", adds Emmanuel Dupuy. It is enough to observe the front line to see that Russia has settled along the Dnieper "which becomes a natural border. On the left bank, there are the Ukrainian forces and on the right, the Russian forces," he said.

The Kakhovka hydroelectric dam in Kherson is a good example of a struggle for influence: occupied by Russian forces, it was damaged - according to Moscow - by a Ukrainian strike at the beginning of November. In mid-October, on the other hand, kyiv accused Russia of having "undermined" the Kakhovka dam, which the Kremlin had denied. This enormous infrastructure, just over 3,000 meters long, built in the 1950s, provides water supply to the Crimean peninsula, annexed by Moscow in 2014." The Kakhovka dam has considerable scope to the electricity production that it accompanies (334.8 megawatts), the role of cooling the 6 reactors of the neighboring nuclear power plant of Zaporijia and the question of the possible destruction of this dam - which had been mutually reproached by one and the other of the parties. It occupies a highly strategic place in the conflict", resumes Emmanuel Dupuy.

In addition to appearing as a series of tactical points on a map, this damaged hydraulic infrastructure affects the morale of civilians. "Vladimir Putin's goal is to continue his campaign of terror by depriving the inhabitants of the most vital needs and making certain areas uninhabitable", warns Emmanuel Dupuy. What does international law say about the destruction of water infrastructure? "The right to drinking water and sanitation is enshrined in the Convention on the Rights of the Child (CRC), United Nations resolutions and the Geneva Conventions", recalls UNICEF in a press release published on his website. In other words, depriving the population of clean drinking water could be considered a war crime.