Suspected of being behind the sabotage of the Nord Stream 1 and 2 gas pipelines - and while a fourth leak has just been reported by the Swedish authorities - Russia is concentrating on the imminent incorporation within its territory of four Ukrainian regions in which the "Yes" to annexation has largely won. 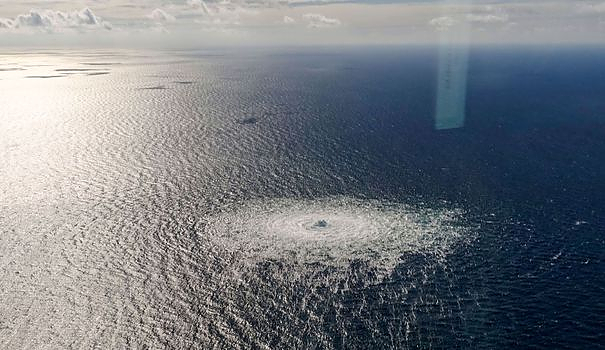 Suspected of being behind the sabotage of the Nord Stream 1 and 2 gas pipelines - and while a fourth leak has just been reported by the Swedish authorities - Russia is concentrating on the imminent incorporation within its territory of four Ukrainian regions in which the "Yes" to annexation has largely won.

The day before, Washington had assured Denmark of its support for the gigantic leaks from the Nord Stream 1 and 2 gas pipelines. "If they need help, we are there for them," said a senior US military official. If, for the time being, no request has been made by Denmark, the United States has "capabilities that could certainly help", in the words of the official. During a press conference, the director of the Danish Energy Agency, Kristoffer Böttzauw, said that "a clear majority of the gas" had already come out of the Nord Stream 1 and 2 pipes, damaged by an act of alleged sabotage. "We expect the rest to slip away by Sunday," he added.

Furthermore, Germany has decided to step up its vigilance with regard to the protection of its “critical infrastructures”. "We have to prepare for scenarios that were inconceivable until recently," said German Interior Minister Nancy Faeser. The infrastructures concerned are those relating to the production of electricity, the transport and distribution of gas and raw materials.

Map of the area where gas leaks were detected on the route of the Nord Stream 1 and 2 gas pipeline.

"Dear Vladimir Vladimirovich Putin, I ask you to consider the question of the accession of the People's Republic of Lugansk to Russia as a subject of the Russian Federation", declared, Wednesday September 28, Leonid Passechnik, separatist leader from the Lugansk region in eastern Ukraine. He has indicated his intention to go to Moscow, like his counterpart from the neighboring region of Donetsk, Denis Pushilin, in order to formalize the annexation to Russia. Evoking the right of indetermination of peoples, the heads of the occupation administrations of Kherson and Zaporijia also expressed the wish to become part of Russia from now on. These demands come as the "yes" overwhelmingly prevailed during the referendums organized in the four occupied regions.

On Wednesday evening, Volodymyr Zelensky declared that Ukraine would "never accept Russia seizing any part of Ukrainian territory". Also, the United States, the United Kingdom, Germany and Canada repeated that they would not recognize the results of the polls, a promise already made by the G7 a few days earlier.

The Pentagon on Wednesday announced a further $1.1 billion in military aid to Ukraine, in the form of arms orders from the US defense industry. It includes in particular eighteen Himars precision artillery systems, 150 armored Humvees, 150 tactical weapons tractor vehicles, radars and anti-drone defense systems, the US Department of Defense said in a statement. This aid "demonstrates the commitment of the United States to support Ukraine in the long term", underlines the Pentagon. This equipment will not, in fact, be delivered to kyiv for several months, until it is produced.

While the announcement of the partial mobilization in Russia led to the flight of thousands of Russians to neighboring countries, the Kremlin intended to prevent the departure of those mobilized. Near the border with Georgia, a van serving as a "military enlistment office" has been set up next to the border post. Another recruitment checkpoint has been set up along the Finnish border, in order to retain people affected by the mobilization measure. Moscow has also announced that it will no longer provide new passports to mobilized Russians. In addition to reservists who do not wish to go to fight in Ukraine, thousands of other citizens are trying to flee their country, fearing that the mobilization will soon be general.

This is the largest humanitarian shipment from France since the start of Russia's invasion of Ukraine. A ship carrying more than 1,000 tonnes of aid for Ukraine sailed late Wednesday afternoon from the port of Marseille. The arrival of the boat is scheduled for October 4 at the Romanian port of Constanta, on the Black Sea. The cargo will then be transported to the humanitarian hub in Suceava, Romania, not far from the border with Ukraine, from where it will be transported by road.

On the military ground, Kharkiv, the second largest city in Ukraine, located near the Russian border, was again bombed overnight from Tuesday to Wednesday, leaving 18,000 homes without electricity, without causing any deaths. This Russian-speaking region has been resisting and repelling Russian troops for more than seven months, and it is not the victory of the "Yes" vote in the referendum for annexation to Russia that will alter the determination of the Ukrainians. In the Russian region of Belgorod, near the Ukrainian border, 14 people were injured in an explosion of munitions linked, according to the governor, to "human error".

Apple confirmed on Wednesday that it has removed the apps of Russian social network VKontakte - the equivalent of a Russian Facebook - from its App Store, following new British sanctions imposed on Russian organizations and personalities in retaliation for the annexation polls organized in four regions of Ukraine via Moscow. The Californian brand explained that the publishers of VKontakte's mobile services were controlled by entities sanctioned by London. Users can continue to use their applications if they already have them on their iPhone, but not download new ones or perform updates.