Ukraine: for the United States, it is too early to judge kyiv's counter-offensive

Ukraine announced new military successes on Monday, September 12, saying it had reached the Russian border and recaptured the equivalent of seven times the area of ​​kyiv in one month from the Russian army, which responded by bombarding certain reconquered areas. 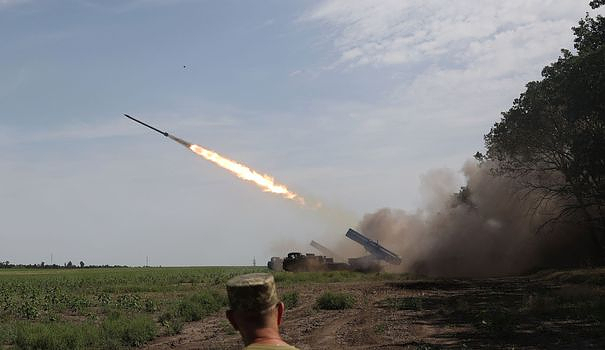 Ukraine announced new military successes on Monday, September 12, saying it had reached the Russian border and recaptured the equivalent of seven times the area of ​​kyiv in one month from the Russian army, which responded by bombarding certain reconquered areas. The Ukrainian army had first announced a counter-offensive in the south, before making a lightning advance in the Kharkiv region in the northeast over the past week. The United States, however, is cautious.

US Secretary of State Antony Blinken said on Monday that it was "too early" to predict the outcome of the Ukrainian army's counter-offensive in northeastern Ukraine against Russian forces. "We're in the early days (of the counter-offensive) so I think it wouldn't be good to predict exactly where this is going to take us," he told a news conference in Mexico City. .

"The Russians maintain very significant forces in Ukraine, as well as equipment and ammunition," observed the secretary of state, on a whirlwind trip to Mexico City for a high-level "US-Mexican economic dialogue". "But clearly we have significant progress on the part of the Ukrainians, particularly in the northeast," said Joe Biden's envoy who was in kyiv last week.

The Ukrainian army has now taken over nearly 6,000 km2 of territory controlled by Russian forces during its counter-offensive launched in early September, President Volodymyr Zelensky said on Monday (September 12). "Since the beginning of September, our soldiers have already liberated 6,000 km2 of Ukrainian territory in the east and south, and we are still moving forward," Volodymyr Zelensky said in a video posted on social media. Sunday September 11, kyiv said to have taken back more than 3000 km2.

Area reconquered by the Ukrainian army between September 2 and September 11 east of Kharkiv: scale of France

Ukraine's president separately thanked three military units, lauding their "bravery" in the operation which resulted, if consolidated, in the biggest territorial gains for Ukraine since the withdrawal of Russian forces from the suburbs of Kyiv at the end of March.

One of the main leaders of the pro-Russian separatists in eastern Ukraine, Denis Pushilin, on Monday acknowledged a "difficult" situation on the front line in the face of the Ukrainian counter-offensive, while assuring that the Russian forces "hold their ground ". "The situation remains difficult. The adversary is trying to damage critical and civilian infrastructure," Denis Pushilin told Russian television channel Rossiya 24, referring to "massive shelling".

This official, who is at the head of the “republic” unilaterally proclaimed by the separatists in Donetsk, notably mentioned Ukrainian attacks on the town of Lyman, in the east. According to him, the Russian and pro-Russian forces are "holding their ground" and the situation, although "difficult", remains "under control". He also assured that they "advanced in certain areas", without naming them.

On Monday, Russian forces claimed to have bombed areas taken over by Ukraine not far from Kharkiv, in the Kupyansk and Izium sectors.

The International Atomic Energy Agency (IAEA), in consultations with kyiv and Moscow for the establishment of a safety zone around the Ukrainian nuclear power plant in Zaporizhia, reported positive signals on Monday.

"I have seen signs showing that they are interested in such an agreement," Director General Rafael Grossi told a press conference in Vienna on the first day of the UN Board of Governors. "We are discussing the different technical characteristics", such as the perimeter of this area or the work of the two IAEA experts present on site. "And what I observe is that both sides are cooperating with us and asking questions, lots of questions," continued Rafael Grossi.

The spokesperson for Ukrainian diplomacy, Oleg Nikolenko, for his part once again pleaded on Twitter for the "de-occupation, demilitarization and return under Ukrainian control" of the plant. "All of the IAEA's efforts must be focused on achieving this goal," he added.

Four bodies of civilians killed have been found with "traces of torture" in the village of Zaliznychné, in the Kharkiv region, recently retaken by kyiv from Russian forces, the Ukrainian prosecutor's office announced on Monday. According to him, the four corpses were found on Sunday and "carried signs of torture". "Three of them were buried on the territory of family properties, another was buried on the territory of the asphalt factory in front of the railway station," he said on Facebook.

"According to the preliminary version of the investigation, the victims were killed by the Russian military during the occupation of the village," continued the Ukrainian prosecutor's office. According to him, it was the inhabitants who "contacted the police and reported that Russian soldiers had killed their fellow citizens" after the passage of this village under Ukrainian control last week.

The NGO Amnesty International for its part called on Monday the Ukrainian authorities to "give priority to the collection of evidence" of alleged war crimes in the territories recently retaken from Russian forces. "Collecting such evidence is extremely resource-intensive, and we therefore call on the international community to provide resources that will support Ukraine's efforts," the organization said in a statement.

Russian forces have been accused of multiple abuses during their occupation of the outskirts of kyiv, notably in Boutcha, from where they withdrew at the end of March. Moscow has for its part denied any crime and assured that it is about falsifications.