Toyota Aygo X Cross: the little one in the family is no longer so small

We tested the third generation of the Aygo, which has been transformed into a compact urban crossover and completes Toyota's SUV range alongside the Yaris Cross, C-HR and RAV4. 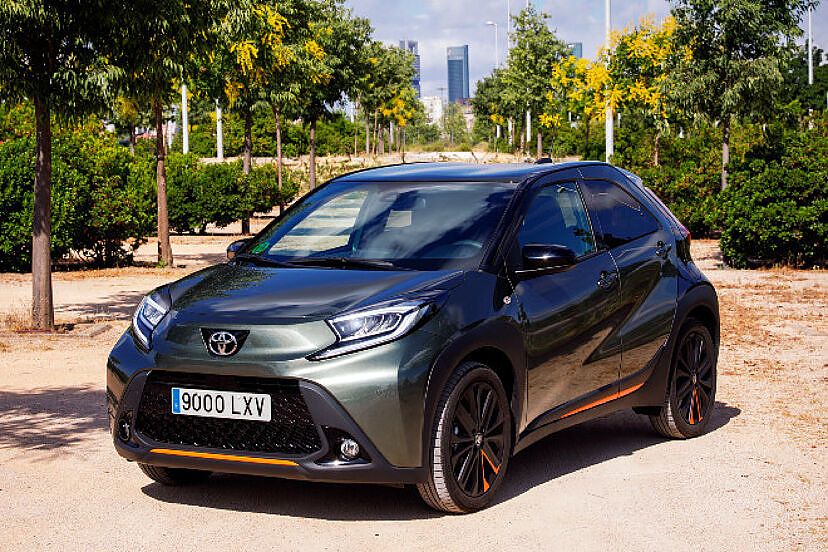 We tested the third generation of the Aygo, which has been transformed into a compact urban crossover and completes Toyota's SUV range alongside the Yaris Cross, C-HR and RAV4.

The third generation of the Toyota Aygo, now called Aygo X Cross for a simple reason, is now available in Spain. The smallest of the Toyota family is not so small anymore and is now an urban crossover. And what does that mean? Well, it has grown lengthwise, widthwise and also heightwise. And a lot. It now measures 3.7 meters long (23.5 cm), 1.74 wide (12.5 cm) and 1.51 high (5 cm). Ground clearance has also increased by 1.1cm and the wheelbase has been stretched by 9cm, offering a larger cabin.

The change is huge. Although it is still an A-segment car, it is now bigger than all its rivals (Peugeot 108, Citroën C1, Fiat 500, Kia Picanto, Renault Twingo, Hyundai i10 or Fiat Panda). In fact, Toyota says that the new Aygo X Cross is a compact urban crossover, a new category in which there is hardly any competition. So the result is a one-of-a-kind vehicle that also completes Toyota's crossover range alongside the Yaris Cross, C-HR and RAV4.

At first glance and from afar, the Aygo X Cross looks more like a Yaris than a second generation Aygo. Although it is still 24 centimeters smaller than the Yaris, it has practically the same width and height as the Japanese utility. They share a platform for a reason, the TNGA-B, although with the convenient adaptations to adapt to a smaller car.

What they don't share is Toyota's Electric Hybrid technology. The Aygo X Cross is practically the only model in the range without hybrid versions in Spain, at least for now. The Aygo X Cross is powered by a 1.0-litre petrol engine that develops a power of 72 hp and a maximum torque of 93 Nm. Of course, you can choose with five-speed manual transmission or continuous variator automatic.

The range of the new Aygo X Cross is made up of three finishes, called Play, Trendy Edition and Limited Edition, a special launch edition that attracts a lot of attention due to its attractive design. We have just tested the Aygo X Cross with the Limited Edition finish and we have attracted all eyes wherever we went.

The Limited Edition is distinguished by its two-tone Jungle Green bodywork with a black roof, 18-inch matte black alloy wheels with tangerine accents and a wealth of standard equipment, including the new Toyota Smart Connect multimedia system with center display. 9-inch and wireless Apple CarPlay and Android Auto connectivity, or the JBL Connect Pack with JBL premium sound system with four speakers and subwoofer.

The first thing you notice when you get behind the wheel of the Toyota Aygo X Cross Limited Edition is that access to the passenger compartment is easier and the driving position is higher (5.5 cm more than the previous Aygo). Although it is still a four-seater vehicle, the interior space looks larger, especially in the back. In fact, the load capacity of the trunk is increased by 60 liters, when the body barely grows 23.5 cm compared to the second generation Aygo.

But, without a doubt, what most attracts the attention of the passenger compartment is the large central screen of the multimedia system (up to 9 inches in the top-of-the-range version), which, if it includes a rear view camera, offers amazing visibility and It is of enormous help when parking or maneuvering in reverse. One of the best we've seen lately.

The Aygo X Cross is very easy to drive, especially on narrow streets and garages, thanks to its small size. It is evident that it is made for the city (although it does not have hybrid technology or an ECO label), to circulate without haste and without demanding too much from the small 1.0-litre three-cylinder engine. Its modest performance says it all: from 0 to 100 in 14.8 seconds and a top speed of 151 km/h.

Traveling with it is possible and, in fact, it offers a wide array of driving aids (such as automatic pre-collision braking with pedestrian and cyclist detection, traffic sign recognition, involuntary lane departure warning and intelligent headlight control). of highway), although better if we do not take it to the maximum of its occupation or load capacity. Fortunately, it only weighs 1,015kg empty, so under normal conditions it feels agile and dynamic.

In terms of consumption, it homologates an average cost of 5 l/100 km and CO2 emissions of 114 g/km in the WLTP combined cycle, for which the DGT label C corresponds. The fuel tank has a volume of 35 liters, according to the size and weight of the vehicle, while the trunk reaches 231 liters, 55 less than that of the Yaris for about 4,000 euros of average difference between both models with equal equipment .

And speaking of prices, the Aygo X Cross is available in Spain from 13,600 euros, although our test unit with Limited Edition finish, S-CVT automatic transmission, 18-inch alloy wheels and 9-inch multimedia screen has a starting price of 18,250 euros.