The fines and points that are lost for speeding: up to 600 euros and six points

Excessive or inappropriate speed is one of the main causes of accidents with fatalities and radars formulate more than three million fines a year on Spanish roads, which in addition to the economic sanction also lead to the loss of points on the driving license. 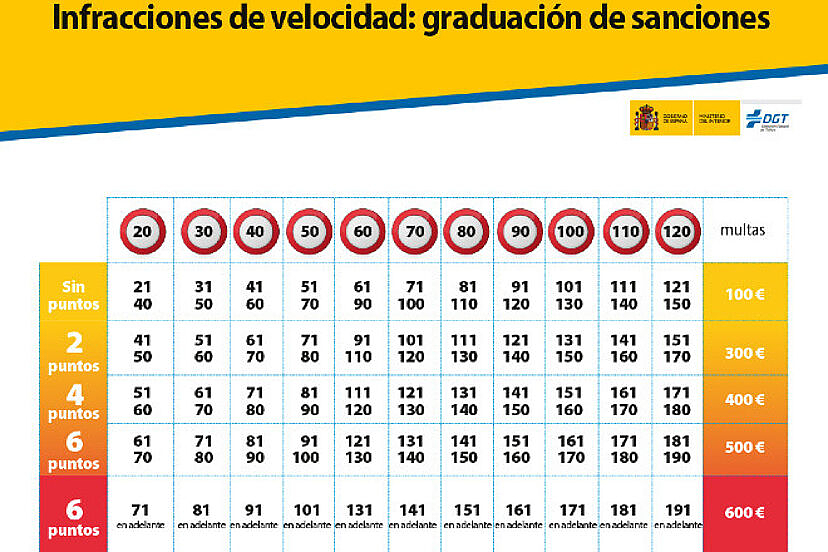 Excessive or inappropriate speed is one of the main causes of accidents with fatalities and radars formulate more than three million fines a year on Spanish roads, which in addition to the economic sanction also lead to the loss of points on the driving license.

Speeding is the most frequent traffic offense in Spain and the main reason for a fine or administrative sanction. In 2019, the DGT made a total of 4,685,599 complaints on the Spanish roads under its jurisdiction, of which almost three million (more than 60%) were speeding violations captured by fixed and mobile radars.

By law, all fixed and section speed cameras are duly signaled by means of vertical panels, and sometimes also with luminous warnings on the highway crossing gates. Drivers can previously know where they are located many meters before the radar itself, but even so, these radars (the gantry ones) detected 2,234,411 infractions in 2019, at an average of 6,120 daily complaints.

There are few Spanish drivers who have not been fined at some time for breaking speed limits, whether on urban roads, crossings, conventional roads, highways or motorways. Excessive or inappropriate speed is one of the main risk factors on the road. "Speed ​​directly influences the severity of road accidents and speed limits are established to protect everyone's road safety," the DGT often reminds.

One in five traffic accidents with victims can be directly related to speeding, according to data from the DGT. In 2019, it was present in 23% of the accidents with fatalities and more than 300 people died in accidents in which speed was one of the concurrent factors.

Failure to comply with speed limits is typified as a serious or very serious offence, depending on the type of road, the road limit and the speeding committed. The economic sanctions range between 100 and 600 euros depending on the excess and the maximum speed limit, either the generic one of the road or the one established by the prohibition signs in a certain section due to the danger of it due to reduced visibility. , curves, grade changes, intersections, etc.

In addition to the economic sanction, failure to comply with the speed limits also entails the loss of points on the driving license (between 2 and 6 points depending on the speeding committed). The DGT has just shared, through Twitter, the table of fines and driving license points that can be lost for speeding.

From 191 km/h onwards it is considered a very serious infraction and the punishment amounts to 600 euros and the loss of six points, although from 200 km/h it is already considered a crime and carries prison sentences. "If the urban limit is exceeded by 60 km/h or the interurban limit by 80 km/h, it is a crime," recalls the DGT.

Buses, vehicles derived from tourism and adaptable mixed vehicles, for example, must circulate at 100 km/h on highways and expressways, while trucks, tractor-trailers, vans, motorhomes weighing more than 3,500 kg, articulated vehicles and cars with trailers do not. They can exceed 90 km/h on the motorway or dual carriageway. And on conventional roads they must circulate at a maximum of 80 km/h.