The Razoni freighter was to symbolize the beginning of a return to commercial normalcy. 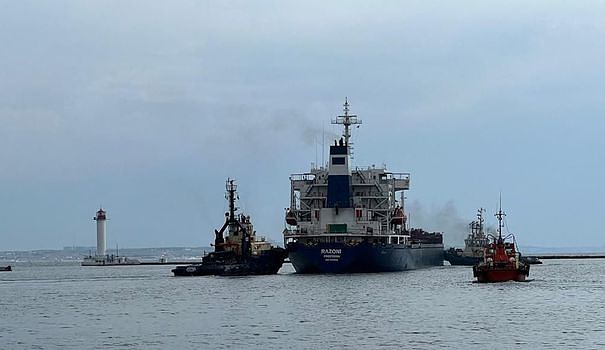 The Razoni freighter was to symbolize the beginning of a return to commercial normalcy. Instead, the malfunctions he encountered stole the show. The first ship carrying Ukrainian cereals docked on Wednesday, August 10, at the port of Mersin, in Turkey, not without problems. Leaving on August 1 from the port of Odessa, the freighter flying the Sierra Leonean flag was authorized to sail following the agreement between Russia, Ukraine and Turkey. While he was to deliver his cargo to the Lebanese port of Tripoli, his plans changed along the way. The initial buyer, a Lebanese company, failed despite the pressing need for cereals in this country - Ukraine provides 25% of its needs.

According to the Ukrainian Embassy in Lebanon, "the buyer refused to accept the shipment due to the delay in delivery terms (five months)." After this long stay in the holds, the quality of the cargo may indeed have deteriorated. However, before leaving the waters of the Black Sea, the Razoni was jointly inspected by the Turks and the Russians, in accordance with the tripartite agreement. Although the order was placed before the war, the Lebanese buyer was not unaware that a war was underway in Ukraine. Another hypothesis put forward by the Lebanese media L'Orient-le-Jour: the final destination of the cargo would have been Syria, after a transit in Lebanon. One of the reasons for the cancellation could therefore be linked to a payment problem by the Syrian buyer.

After a few days of wandering off Cyprus, the Razoni managed to find another buyer in Turkey, where it delivered barely 5% of the 26,527 tons of maize it was carrying. What will happen to the rest of the cargo, as the quality of the grains decreases day by day? The most guarded ship in the world is supposed to unload the rest of the grain in Egypt, the director of the Turkish transport company Toros, Lojistik Kargo, told Reuters.

The arrival of the precious cargo of the "Razoni" acted as a test to mark with great pomp the respect of the agreement signed in Istanbul. The proper functioning of the latter was however questioned on Wednesday, with the announcement of the cancellation of the contract for the sale of the first load of cereals. "There is what the States conclude and the commercial transaction. It is difficult for them to intervene, it remains trade", explains to L'Express Anne-Sophie Alsif, chief economist of BDO.

Through this imperfect delivery, the complexity of the grain trade is highlighted. In this type of transaction, diversions do not seem uncommon. "These are things that happen even if the shipments and the financial sums remain large enough not to happen every day. If the contracts are not respected, there are penalties", assures the economist.

But soaring food prices caused by the Russian invasion are shaking up the international market. Consequences: buyers are pushed to speculate more. “They may say to themselves that it is better to postpone the purchase to a period when prices will be lower,” comments Anne-Sophie Alsif. However, on paper, there should be no problem because foodstuffs or energy are the subject of specific contracts: the products are purchased at a price agreed in advance to avoid taking this kind of fluctuation into account. . A clause that is not sufficient to avoid unforeseen events.

Proof of the fluctuating nature of certain international transactions, it happens that ships set sail without knowing their end customer. The idea being to hope for a more attractive offer depending on the volatile prices of agricultural commodities. And the war in Ukraine has increased distrust of buyers, especially regarding the quality of the goods. "As for Ukrainian goods, the stocks were made several weeks ago, so it is much more difficult to test the product. If it is possible that the old stocks will see their price drop, the new ones will be sold at a price of gold", explains Anne-Sophie Alsif.

Other ships could follow the same risky path as the Razoni, especially if the situation worsens at the start of the school year with the Taiwanese crisis, a potential source of tension on the financial markets. "As soon as you have a form of tension on the financial markets, you have speculation on certain types of assets (gold, energy, foodstuffs) where you have stocks that are built up", explains Anne -Sophie Alsif.

Frederick Kenney, a senior UN official overseeing the deal, said on Wednesday that wheat exports would begin next week after ships laden with corn, stuck in Ukrainian ports for the Russian invasion, were able to leave. The next cargoes departing from Ukraine will be scrutinized closely. If Russia agreed to make a move under pressure from its African allies, it could quickly change its mind. Especially if arriving ships are struggling to find customers.