Protocol, guests, security... All you need to know about the funeral of Queen Elizabeth II

"The funeral of the century". 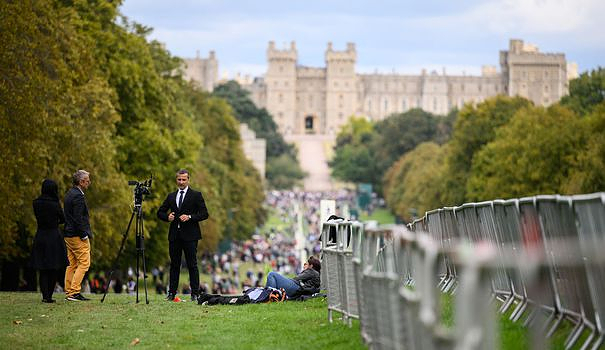 "The funeral of the century". Hundreds of foreign dignitaries and crowned heads are expected this Monday, September 19 in London for the farewell to Queen Elizabeth II. A security puzzle, by the size of the place chosen for the event, but also diplomatic between the privileges granted to some and the controversial guests. The organizers must therefore jostle to satisfy the leaders of the whole world, who have come to pay a last tribute to the most popular sovereign on the planet. Some 4.1 billion viewers should also attend this historic moment behind their post.

The state funeral of Queen Elizabeth II, the first in the United Kingdom since that of Winston Churchill in 1965, follows a meticulously prepared course. At 6:30 a.m. local time, the last visitors to see the Queen's coffin will have to leave Westminster Hall. The latter then begins a race, in the direction of Westminister Abbey, not far away.

At 10:35 a.m., 2:30 a.m. after the opening of the abbey, the coffin will be carried from the catafalque, the imposing platform where it rested, to the gun carriage which will be waiting outside the north door of Westminster Hall. The coffin won't arrive until 10:52 a.m. through the west door. King Charles will follow on foot, with members of the royal family.

It is only at 11 a.m. that the funeral really begins. They will be led by the Dean of Westminster, David Hoyle. The sermon will be delivered by the Archbishop of Canterbury Justin Welby, spiritual leader of the Anglican Church of which the British sovereign is the formal head. The ceremony will end at 12 p.m., with two cannon shots, the anthem and a lamentation.

At 12:15 p.m., a new procession will set off. Direction Hyde Park Corner, near Buckingham. Big Ben will punctuate the march, as will many cannon shots. At 3:06 p.m., the hearse arrived in Windsor and set off on "the Long Walk", an impressive straight alley of more than 4 kilometers which leads to Windsor Castle. At 3.40pm, the King and senior members of the Royal Family join the procession on foot from the Quadrangle, the Great Court of Windsor Castle, before the procession stops at St. George's Chapel at 3.53pm. A new ceremony will then begin, around 4 p.m., in the presence of the fifteen Prime Ministers of the kingdoms of the former Commonwealth.

Eight soldiers from the 1st Battalion of the Queen's Company Grenadiers Guards will have the daunting task of carrying the Queen's coffin from Westminster Hall to the gun carriage and then into Westminster Abbey a once the procession is over.

This regiment is one of five Sovereign's Household Guard infantry regiments and one of the oldest regiments in the British Army. The uniform of its members, recognizable by the high bearskin cap, was borrowed from the grenadiers of Napoleon's Imperial Guard, defeated at Waterloo. These soldiers will be accompanied by agents of the Queen's Equerry Service.

Three regiments will also be particularly honored during the procession, marching very close to the coffin of Elizabeth II: the Yeomen of the Guard, the oldest military corps in the British army created in 1485, the Honorable Corps of Gentlemen at Arms, as well as the Royal Company of Archers, who were Queen Elizabeth II's bodyguards when she was in Scotland.

With Westminster Abbey only able to accommodate around 2,000 people, only heads of state and one or two guests per country would have been invited to the UK's first state funeral since 1965. Emperor Naruhito and Empress Masako of Japan, Prince Albert II of Monaco, his wife Charlene, King Willem-Alexander of the Netherlands, Queen Maxima and Princess Beatrix, King Philippe of the Belgians, King Harald V of Norway, have confirmed their attendance. Queen Margrethe of Denmark, now the only reigning queen in Europe, will be present. The King of Spain Felipe VI will be there, but also his father Juan Carlos I, who abdicated in 2014 and now lives in exile in the United Arab Emirates.

US President Joe Biden and his wife Jill Biden, at the top of the list of diplomatic guests, landed in London on Saturday evening. Unlike other leaders who were asked to come to the Abbey on government-chartered buses, Joe Biden was granted permission to use his armored presidential limousine, "The Beast".

Originally Macron also had to take the bus. "Can we spare a thought for the person in charge of the Élysée who had to announce to President Macron that in London, he should get on the bus?", laughed the Times on Sunday. The French president, who will indeed be present, would have said "no" to the bus but we do not know what arrangements have been made.

Another difficulty lies in the placement of the guests, underlines the Times: it is necessary "to avoid any risk that anyone will feel offended by being placed behind a pillar and to ensure that no one comes to fight". In addition to the President of the European Commission Ursula von der Leyen and the President of the European Council Charles Michel who will make the trip despite the tensions following Brexit, are among the guests sometimes disputed personalities.

Turkish Presidents Recep Tayyip Erdogan and Brazilian President Jair Bolsonaro will be present, as well as Saudi Prince Mohammed bin Salman (MBS), regularly criticized by NGOs for serious human rights violations in his country and dismissed from the international scene after the assassination by journalist Jamal Khashoggi at the Saudi consulate in Turkey in 2018. Chinese President Xi Jinping will not be there, but his Vice President Wang Qishan will attend the funeral, as an official Chinese delegation was denied the right to gather in front of the coffin of the sovereign. The affront comes after China imposed sanctions on British parliamentarians who criticized its human rights record.

Russia and Belarus are among a small group of nations that will be barred from the queen's funeral after Moscow invaded Ukraine, a ban deemed "blasphemous" and "immoral" by Moscow. Burma, a former British colony ruled by a military junta sanctioned by London, but also Syria, Afghanistan and North Korea have also been excluded.

The first estimates vary between 30 to 40 million euros, supported by the State. To this must be added significant economic losses linked to this day decreed as a holiday by the new King Charles III.

There remains a major hassle. How to secure all these beautiful people? “We are confident that dignitaries from around the world who will make the trip will understand that this is a daunting challenge and an unusual situation,” a government spokesman said on Tuesday, anticipating criticism of the necessarily heavy security protocol.

The police will thus deploy 36 kilometers of barriers. Some 10,000 security officers will operate throughout the British capital and will support Scotland Yard to ensure security. Since the news of the Queen's death, incidents have been rare at tributes, but a man has been charged with disturbing the peace after he left the queue and approached the coffin on Friday.

A total of 6,000 soldiers, sailors or British army pilots will also take part in the procession or will be deployed throughout the procession, Admiral Tony Radakin, Chief of Staff, told the BBC on Sunday. armies. Several times on the route of the coffin, they will perform a royal salute, for example when passing in front of the Queen Victoria Memorial. "For all of us, this is our last duty to Her Majesty The Queen and our first major duty to His Majesty King Charles."