Macron in Washington, capping the price of Russian oil ... The tour of the world news

UNITED STATES</p>Macron at Biden: (almost) perfect agreement</p>French and US Presidents Emmanuel Macron and Joe Biden exchange a toast during a state dinner at the White House on December 1, 2022 in Washington. 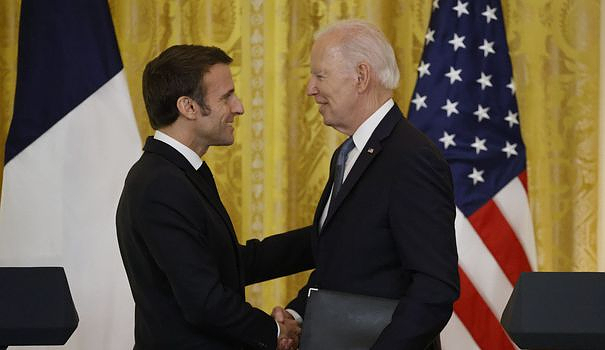 French and US Presidents Emmanuel Macron and Joe Biden exchange a toast during a state dinner at the White House on December 1, 2022 in Washington.

Emmanuel Macron made his second state visit to the United States, from November 29 to December 2. On the program: a visit to NASA HQ, a dinner at the White House, a stopover in New Orleans, discussions with Joe Biden and his advisers about Ukraine; but also of the American plan to fight against inflation, the only point of friction. "The preparation for the visit was marked by European complaints, in particular from Mr. Macron and German Chancellor Olaf Scholz, about tax incentives for electric vehicles (...), conditional on production on the North American soil”, summarizes the Washington Post. Joe Biden has indicated that "adjustments" could be made.

Saturday, December 3 at dawn, 8,500 police and 1,500 soldiers surrounded Soyapango, a suburb of San Salvador which is a stronghold of the maras, these formidable criminal gangs which reign terror in the country of 6.5 million inhabitants. "President Nayib Bukele's mano dura policy has intensified since March 26, when 62 homicides were committed in one day," reports El Nuevo Herald, the Latin daily from Miami (USA). Already 58,000 people accused of belonging to the maras or collaborating with them are in detention. In 2022, homicides are down 43% from the previous year.

With his usual cynicism, the Russian president affirmed on December 2 to the German chancellor Olaf Scholz that the strikes against the Ukrainian energy infrastructures were "necessary and inevitable in the face of the provocative attacks of kyiv". If they do not undermine the determination of the Ukrainians, this destruction makes the daily life of the population extremely difficult and increases the cost of reconstruction.

This should amount to "500-600 billion euros", indicated the vice-president of the World Bank, Anna Bjerde, to the Austrian daily Die Presse. Before this fall bombing campaign, kyiv estimated the amount needed at 350 billion euros.

This is the last episode of an incredible case of burglary in a property of Cyril Ramaphosa. In 2020, hundreds of thousands of dollars in cash were stolen from the South African president. This theft, revealed in 2022, had raised many questions: why had the manager passed over it in silence? Where did this money come from?

A commission mandated by Parliament concluded on November 30 that the head of state had broken anti-corruption laws and recommended his dismissal. "There is no simple solution, neither for Ramaphosa nor for his party, the ANC, notes the Daily Maverick. However, what will happen (...) will shape the party, the state and the country ."

Chinese President Xi Jinping was reappointed as head of the Communist Party on Sunday, October 22.

After days of demonstrations unprecedented since the Tiananmen movement in 1989, President Xi Jinping estimated on December 1, during a visit to Beijing by European Council President Charles Michel, that the lesser danger of the Omicron variant would allow "more flexibility" in the "zero Covid" policy.

Several cities have eased restrictions and businesses have reopened, but scientists fear an explosion in cases, due to the limited effectiveness of the vaccine and the low rate of vaccination of the elderly. "China is at an impasse from which there seems to be no easy way out," observes the New York Times.

Uncertainties about the morality police

On December 3, Iran's attorney general announced that "the morality police have been abolished by the institution that created it," the Interior Ministry. This measure has been demanded by the demonstrators since the death of Mahsa Amini, killed by this same morality police. “Some present this announcement as a major sign of the Islamic regime's decline, points out L'Orient-Le Jour. the protesters." The reality of this measure is however questioned by the state media.

The "oil war" is launched

Nine months after the Russian invasion of Ukraine, the European Union (EU) activated its embargo on some of Moscow's black gold. Since December 5, all crude oil arriving from Russia by sea has been banned in Europe. "The oil war between the West and Russia is becoming a reality, notes Politico. The EU is finally trying to hit where it hurts for Russia, that is to say its oil revenues, but it must take careful not to do too much damage to itself and to a fragile global economy." New sanctions on processed petroleum products - notably diesel - are due to come into force on February 5.