Funeral of Elizabeth II, mass grave in Izioum ... The tour of the international news 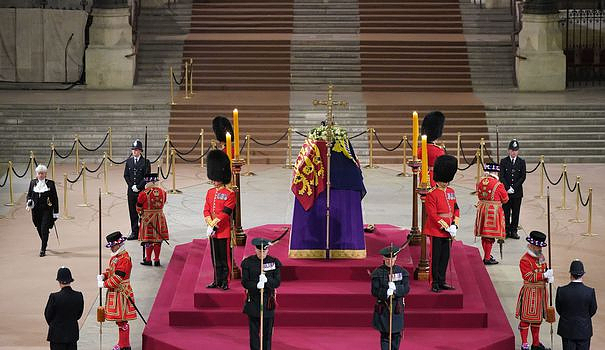 More than 500 dignitaries and a hundred heads of state: from the American Joe Biden to the Brazilian Jair Bolsonaro via Emmanuel Macron, the whole world came to pay their last respects to Queen Elizabeth II, on September 19, in London . "The Queen's funeral is one of the largest gatherings of world leaders in history, underlines the Daily Telegraph. This ceremony gave rise to the largest security operation ever seen in the United Kingdom." Symbol of geopolitical tensions, the Russian and Belarusian presidents were not invited, as were Bashar al-Assad, the Taliban leaders and the Burmese military junta.

Uprising against the compulsory veil

Arrested by the morality police because of an incorrectly positioned veil over her hair, Mahsa Amini died on September 16, at the age of 22. The Iranian authorities assure that his death was due to a sudden heart attack, unrelated to possible torture. "These official explanations did not convince many Iranian women, who shared their experiences of police brutality linked to the veil, reports Al-Monitor. Mahsa appears as an embodiment of their suffering, repression and injustice." Demonstrations against the regime erupted across Iran, prompting a violent response from the authorities.

For his first trip abroad since January 2020, Xi Jinping visited the Shanghai Cooperation Organization summit in Uzbekistan, where he met with Vladimir Putin. “Xi and Putin continue to describe their countries as close partners, explains The Diplomat. But the things left unsaid are important, and they have nowhere mentioned their common desire to rebuild the international system. China, which does not boast of its association with Russia to achieve this (at least for now)." Putin admitted that Xi had raised "questions" and "concerns" about the war in Ukraine.

For his first appearance on 60 Minutes, CBS's flagship program, since becoming president, Joe Biden promised Vladimir Putin a "substantial" response in the event that Russia uses a tactical nuclear weapon in Ukraine, where the Russian army retreats. "Don't do it, repeated the American president three times, on September 18, clenching his jaw. "Biden did not specify what the response of the United States would be", notes Bloomberg. But one thing is clear: the two great powers of the Cold War have definitely returned to the "grammar" of nuclear deterrence.

The country crossed by a super typhoon

Nine million people had evacuated their homes in anticipation of the passage of Nanmadol, one of the most powerful typhoons that the country had to face, on September 18 and 19. The damage caused by gusts of wind over 230 km/h and flooding is expected to amount to billions of euros. In some areas, precipitation - more than 40 cm in twenty-four hours - exceeded the usual average for the whole month of September. "Scientists have predicted a very active hurricane season this year, influenced by a natural phenomenon known as La Nina", the cooling of the waters of the Pacific Ocean, underlines the BBC site, which adds that "the warming of the sea surface in the Atlantic and the Caribbean, due to climate change, could also have an impact.

A blow to Russian propaganda. Variety singer Alla Pugacheva - one of the most popular in Russia - publicly opposed the war in Ukraine on September 18, denouncing "the death of our boys for illusory goals that make our country a pariah ". Contesting the placement of her husband, an actor also opposed to the war, on the dishonorable list of "foreign agents", the artist asked to appear there in turn. This places the Kremlin in a delicate position. "If Moscow ignores Ms. Pugacheva's request to be labeled as a foreign agent, it could be seen as a blank check for dissent," summarizes The Daily Telegraph.

Discovery of a mass grave in Izioum

A body is extracted from a mass grave in a forest near Izium in northeastern Ukraine on September 16, 2022.

After Boucha, more than 440 graves and a mass grave were discovered on September 15 in a forest near Izium, in the Kharkiv region. Some of the bodies found in this city, liberated in early September during the Ukrainian counter-offensive, had their hands tied and showed signs of torture. “Indiscriminate attacks on Ukrainian civilians have become a feature of the Russian invasion,” points out the New York Times. On the spot, dozens of investigators continue their investigations in order to demonstrate war crimes.