Elizabeth II: the British rush to pay a last tribute to the queen

"Please don't move!" The British government's warning the day before was not followed up. 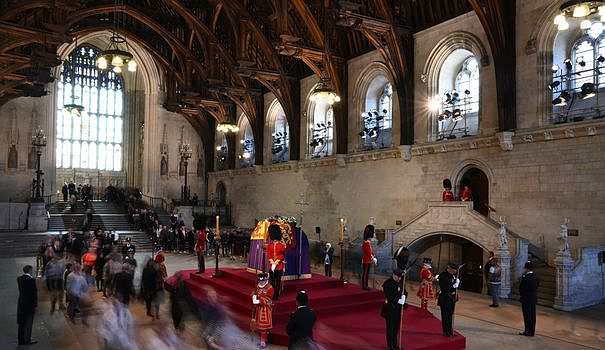 "Please don't move!" The British government's warning the day before was not followed up. This Saturday morning, the queue to join Westminster Hall where the coffin of the queen, Elizabeth II, is exposed, exceeded the 24 hour wait. The funeral of Queen Elizabeth II, who died on September 8 in Balmoral, Scotland, will take place in London on Monday. One hundred presidents and heads of government will attend these national funerals. The British therefore rush to gather one last time at the foot of the ex-sovereign.

Since Wednesday, when the coffin arrived at Westminster Hall, tens of thousands of people have marched, waiting long hours in the streets of London. The queue, too imposing, has been suspended. This had already been the case the previous week. This Sunday, September 18, it was still necessary to wait 12 hours before hoping to see the coffin of the queen.

The British who moved and were lucky not to find the barriers closed seemed moved this Saturday. We had to be patient since the line reached seven kilometers away. What to worry the crown prince William who came to take news of the health of onlookers. In Westminster Hall, there were teenagers, children, couples, the elderly. All social categories met to commune in the royal enclosure.

Prince William, Prince of Wales, meets members of the public in the queue along the South Bank near Lambeth Bridge on September 17, 2022 in London, United Kingdom.

Prince William, Prince of Wales, offered himself a surprise walkabout this Saturday with the British who were waiting. The very popular heir to the throne thanked the public, worrying about the state of their feet, under the cries "I love you William!". Alongside the seven other grandchildren of the queen, he must participate in a vigil of the coffin, this Saturday evening.

King Charles III also came into contact with the crowd. The new sovereign moved for about twenty minutes, shaking a few hands and exchanging with her.

Queen Elizabeth II's coffin is draped with a royal standard adorned with the Imperial State Crown as well as the Sovereign's Orb and Scepter.

Harry and William at Westminster Hall on Saturday late afternoon.

At the end of the day, Saturday, the grandchildren of Elizabeth II, princes William and Harry, also spent long minutes near the coffin.

The public still has until Monday morning, 6:30 a.m., to gather at Westminster Hall. But given the considerable waiting time to parade in front of the coffin, it is already advisable not to set off to join it, in order to avoid any "disappointment".