Elections in Sweden: historic victory for the right and the far right

The Swedish left leaves power after eight years at the helm. 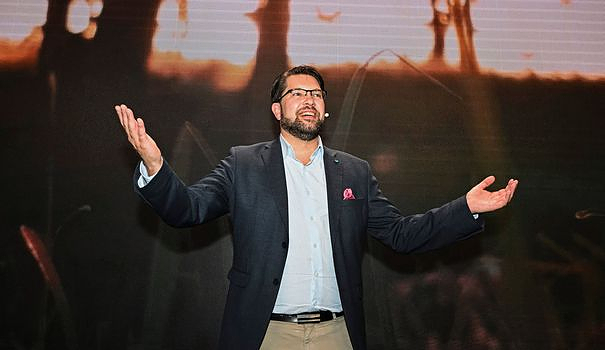 The Swedish left leaves power after eight years at the helm. An unprecedented bloc bringing together the right and the far right won the general elections in Sweden by a small majority against the outgoing left, according to the almost complete results announced on Wednesday 14 September.

"Thank you for the trust - now we will restore order in Sweden!" Immediately reacted on Facebook to his successor, the leader of the conservative party Ulf Kristersson. "I now begin the work to form an effective new government," he added.

With 176 seats, including 73 for the far-right Sweden Democrats (SD), the four-party bloc is very slightly ahead of the left-wing one (173 seats), according to an almost final count covering more than 99% of the polling stations, the results of which were made public by the electoral authority.

Sunday's elections were so tight that it took until a few tens of thousands of votes were counted missing on Wednesday to validate the full results, which ultimately swung one more seat from left to right.

The shift is historic: never before has a Swedish government relied in Parliament on the Democrats of Sweden, the big winner of the elections with 20.6% of the vote and a new rank of second party in the country.

"Now begins the work to make Sweden good again," reacted its leader Jimmie Åkesson on Facebook, promising to be a "constructive force and initiative". Heir to a neo-Nazi group when it was created in 1988, the far-right party has gradually become commonplace in the Swedish political landscape, entering Parliament in 2010 with 5.7%, then climbing with each election, against a background high immigration and criminal gang problems in Sweden. Although the SD is the first party of the majority of the rights, its leader is not in a position to have the support of the three other parties to become Prime Minister, a post promised to Ulf Kristersson.

One of the most complicated points concerns the ambition displayed by the SD to be part of the government. The three traditional right-wing parties (Moderates, Christian Democrats and Liberals) are against it. The most likely scenario according to political scientists is that the SD, although the biggest party of the four, only supports the government in parliament, without being directly part of it.

But this narrow majority, ranging from the centre-right to the extreme right, looks very fragile, the liberals in particular and the SD having very divergent political lines on a number of issues.

Former gymnast, Ulf Kristersson will have to succeed in the acrobatics of finalizing and maintaining the union of the three liberal, conservative and nationalist rights. It was he who at the end of 2019 had for the first time envisaged a scenario of collaboration between the right and the SD. "It's a difficult parliamentary situation", summarizes Mikael Gilljam, with a very weak majority and "parties which do not like each other, like the SD and the Liberals". Behind the SD with 73 seats, 11 more than in the last elections of 2018, the Moderates win 68 seats (-2), while the Christian Democrats have 19 (-3) and the Liberals 16 (-4).

After the resignation of Magdalena Andersson, the president of the Riksdag, the Swedish Parliament, will be able to formally entrust Ulf Kristersson with the mission of forming a majority, with negotiations between parties.

The election of the new head of government cannot take place before September 27 at the earliest, the date of the first plenary session of Parliament.