Death of Elizabeth II: when national mourning weighs on the UK economy

A grandiose funeral, concluded by two minutes of silence: a United Kingdom embraced by emotion said goodbye with great pomp this Monday, September 19 to Elizabeth II, in the presence of hundreds of foreign dignitaries. 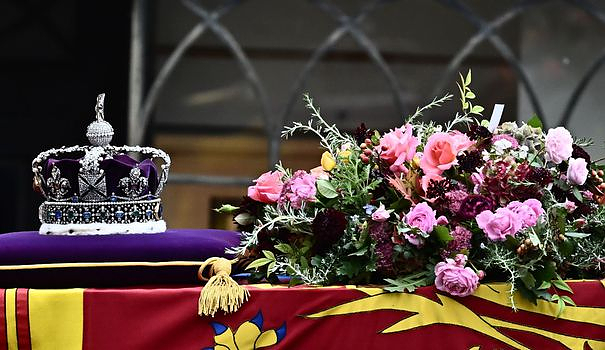 A grandiose funeral, concluded by two minutes of silence: a United Kingdom embraced by emotion said goodbye with great pomp this Monday, September 19 to Elizabeth II, in the presence of hundreds of foreign dignitaries. A chapter of history has therefore turned with this religious funeral, at Westminster Abbey in London, of the monarch who has crossed her 70 years, seven months and two days of reign.

But the cost of living crisis didn't stop during the national mourning. The fall in the purchasing power of the British was on the front page of the media and the political agenda, before the death of the queen, formalized on September 8, eclipsed the subject.

Already weakened before the death of Elizabeth II, with in particular inflation of 9.9% over one year and energy bills which have soared since last winter, the British economy could continue to suffer the blow due to the ten days of national mourning following his death, the public holiday on Monday, business closures and the cost of the funeral itself, between 35 and 40 million euros according to various estimates. Most congresses, gatherings and company dinners have been canceled in the past ten days. Many shops and supermarkets also closed their doors on Monday. As reported by Le JDD, the economic impact for the United Kingdom is estimated in total between 1.2 and 6 billion pounds sterling (i.e. between 1.4 and 6.9 billion euros), according to the British daily The Independent.

The British economy will also experience several changes after his death. The new British coinage will be printed with the portrait of King Charles III, and the Queen's coinage will gradually disappear from circulation. British passports will also be updated, as will stamps and police and military uniforms. These changes could have a considerable cost for the United Kingdom, already threatened by a recession.

The Bank of England announced at the beginning of August that it was forecasting a recession from the end of 2022 and for more than a year, due to inflation at more than 10% driven in particular by the surge in energy prices since the start of the Russian invasion of Ukraine. The British economy is under the threat of a recession "due to the continued pressure on household incomes and the increased cost burden for businesses", reminds KPMG economist Yael Selfin to l AFP.

Economists estimate that the loss of productivity linked to the "bank holiday", the public holiday granted on the day of the funeral, will be enough to tip the country into recession, and this, sooner than expected, reports Les Echos. The release of July's GDP figures, combined with the announcement of a 'bank holiday', 'means that the UK is likely to technically go into recession in the third quarter,' Deutsche Bank economists write in a note, specifies the daily the economic daily.

British Prime Minister Liz Truss unveiled a two-year energy price freeze for individuals and six months for public companies and institutions in early September to help them cope with soaring inflation. This plan, which will cap energy prices for an average household at 2500 pounds per year and which must be financed by borrowing, has not been quantified precisely, but the bill should exceed 100 billion pounds (almost 115 billion euros), or even go well beyond according to various estimates by economists. Faced with fears of recession weighing on the British economy, the government also intends to boost growth through all-out tax cuts, which will also weigh on the government's budget.